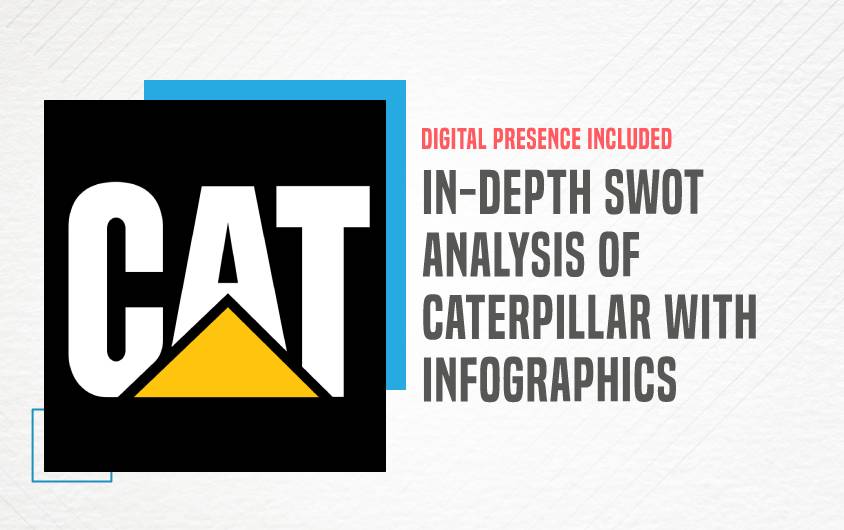 Previously we looked into the SWOT of Analysis Shell, a global energy and petrochemical conglomerate. In this case study, we will analyse the SWOT Analysis of Caterpillar.

Caterpillar Caterpillar Inc. is a global leader in construction and mining equipment, as well as diesel and natural gas engines, industrial gas turbines, and diesel-electric locomotives. Through innovative goods and services, they have been promoting sustainable progress and assisting clients in building a better world.

Caterpillar’s marketing strategy has allowed the company to expand into new markets across the world. Marketing evolves as a result of current customer trends and preferences. Attend our Free MasterClass on Digital Marketing 101, hosted by Karan Shah, CEO and Founder of IIDE, to discover more about today’s effective marketing.

Before we delve into the SWOT Analysis of Caterpillar, let’s have a look at the company, its history, financial situation, products, and competitors.

Caterpillar Inc. is a leading producer of construction equipment. The company is a part of the Dow Jones Industrial Average and is commonly known for its construction equipment and mining industry. The company traces its roots back to 1925 when the Holt Manufacturing Company and C.L. Best Tractor Company merged to create a new entity, which became Caterpillar Tractor Company.

In 1986, it was reorganized into a Delaware corporation. In January 2017, the company moved its headquarters to Deerfield, Illinois. It scrapped plans to build a new headquarters complex in the nearby city of Peoria. The company also sells a line of workwear and clothing under its Cat / Caterpillar name. Aside from machinery and equipment, Caterpillar also offers a variety of products such as smartphones and tablets.

Caterpillar has been manufacturing and selling the following products –

Below are the major five competitors of Caterpillar – Your organization’s strength is something that makes it stand out from the rest. It can be a competitive advantage that sets it apart from its competitors. Some of the strengths of Caterpillar are as follows –

Weaknesses are negative factors that can prevent an organization from achieving its goals and objectives. Some of these include a poor brand, high levels of debt, inadequate supply chains, and lack of capital. So here are some of the weaknesses of Caterpillar –

Opportunity is a type of competitive advantage that can be gained from various external factors. For instance, if a country lowers its tariffs, a car manufacturer can benefit by exporting its products to a new market. Opportunities for Caterpillar are as follows –

Many factors can affect your business outside its immediate environment. Some of these include factors such as a shortage of skilled workers or a supply chain issue. The threats Caterpillar is facing are as follows –

On this note, we come to the end of the SWOT Analysis of Caterpillar. Let’s briefly conclude the case study in the following section.

Based on the results of this business analysis, Caterpillar can enhance performance through differentiation. The company must broaden its enterprise in research and development to build extraordinary products. Currently, the massive equipment, engines, and financial services of Caterpillar are very identical to the clams available from competitors. To increase competitiveness, the firm must empower extra in developing novel products.

Caterpillar can also expand its financial performance by accumulating its distribution network. The firm must concentrate on developing markets because these markets have big economic growth rates. For example, the company could expand the number of Caterpillar distributors in countries like China. One way to tap into various markets while being cost-effective is through digital marketing.

Caterpillar should work on enhancing the existential digital presence as it will allow them to stay on par with the present customer base and reach other markets. By employing various digital marketing skills like SEO, media campaigns, SMM, content marketing and more, they can grow their business quicker.

If you are interested in marketing and wish to work for a renowned organisation like Caterpillar, acquiring a grasp of the field is vital. IIDE provides short-term certification courses in a variety of digital skills and knowledge that can get you up to speed in as little as five days.

Thank you for taking the time to read this case study on the SWOT Analysis of Caterpillar. Check out our IIDE Knowledge portal for more intriguing case studies. Don’t forget to leave your feedback in the comment section below.