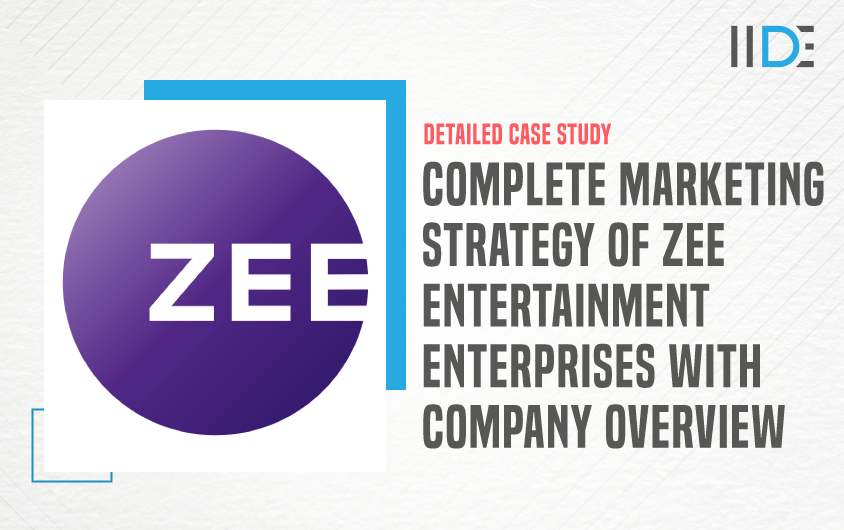 The major goal is to help you understand Zee’s transformation from a dairy entertainment company to one of India’s most well-known and respected media companies.

Marketing is an integral aspect of a company’s DNA that may make or break its success. Marketing has followed users globally into the digital sphere. If you’re interested in modern digital marketing, IIDE’s Free Masterclass on Digital Marketing 101, taught by our CEO and Founder, Karan Shah, is a must-attend.

By the end of this blog, we will have a complete understanding of the marketing strategy of Zee Entertainment Enterprises. Let’s start with the company’s story, target audience, and digital presence.

The company was founded on December 15, 1991, under the name Zee Telefilms, which is used until 2006. As part of a distribution partnership between Viacom International and Zee Telefilms, Zee Telefilms debuted a Nickelodeon-branded programming clock in 1999. In 2002, it was replaced by a new Cartoon Network block.

In 2002, the company purchased a 51 percent stake in ETC Networks. They bought Integrated Subscriber Management Services Limited in 2006, and Taj Television, the owner of TEN Sports, in November 2006. The company was renamed Zee Entertainment Enterprises in the same year.

Zee entertainment is ranked first and has received numerous accolades in various categories throughout the years. Zee Entertainment has risen to the top of its sector in recent years. Zee is a significant television, media, and entertainment company in India, and one of the world’s top producers and aggregators of Hindi programming.

Let’s take a look at Zee’s marketing plan and how Zee handles the marketing effort, among other things.

Positioning – It is currently streaming zee movies from Glory Days as a Historic network. As the Zee Entertainment Enterprises has grown mainly organically in entire India still it is shining brightly in India.

Zee ran a successful campaign that received great feedback from the public. Consider the following campaign:

In its new campaign, Zee personifies why #TvisFamily is so important. The advertising is a salute to television, which serves as a family member in our lives. On the occasion of World Television Day, ZEE Entertainment Enterprise Co., Ltd. launched the #TVisFamily campaign to recognize the importance of television in our daily lives.

The campaign illustrated how television is as near as a family member, playing many duties as a continuous companion in the home. When you’re alone, you can watch TV, and it functions as a glue to keep the whole family together.

When partners, staff, and fans got private letters signed by “Your TV”, they were pleasantly delighted to learn that the letters were written to honour the link they had formed over the years and to thank them for all their love and support, making it everyone’s favourite. Interestingly, viewers on the ZEE network kept guessing all day when they talked to their TV with a bizarre 10-second lag period.

The response they obtained as a result of this ad confirmed their notion that television genuinely transcends all barriers.

We looked at the campaign that was crucial to the brand’s success.

Zee entertainment enterprises conducted this campaign on Diwali of 2021. With the aim to increase the sales of the local vendors. In the campaign, all you have to do is to share the story of local Kissa shopping with local vendors and give them a smile. #YehDiwaliKissonWali

And #ZeeCorporate hashtags were necessary while posting, and get a chance to get featured on the zee pages.

In today’s world, where the majority of people are on social media, a business must use social media to market its product to its target audience.

Zee has a sizable social media following ranging from 6k to 649k. It has maximum followers on Facebook than on LinkedIn and at last on Instagram. They post on social media on a daily basis, demonstrating how committed the firm is to improving its social media presence. The posts contain mostly promotional and informational content along with some posts related to their new product launch. 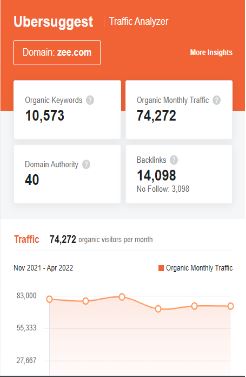 It is stated that the number of keywords – below 500 is terrible, above 1000 is acceptable, and 10,000+ is wonderful for SEO ranking. As can be seen, www.zee.com has 10,573 organic keywords, which is a respectable number. That means Zee Entertainment Enterprises’ digital marketing is gathering a lot of knowledge.

In addition, the average monthly traffic is 74,272 visitors. As a result, Zee Entertainment Enterprises needs to increase its SEO techniques while also working hard enough to maintain the brand rising in Google’s organic SERP results.

Zee Entertainment Enterprises has worked with several YouTubers, Bloggers, and others for marketing purposes since the beginning. They have a large number of influencers with over 50K and 120K followers. Influencers promote the product so that it acquires popularity and sales improve as a result of their fan base.

Today Retail Network was founded in 2007, followed by Today Merchandise in 2010. Bagittoday.com is a joint venture between the two companies.

Zee Entertainment is one of India’s leading media and entertainment firms. Zee Entertainment’s marketing mix includes thirty-three domestic channels and thirty-eight international networks. It has over one billion viewers and 200,000 hours of programming. The channels are divided into categories as follows:

To summarise, everything revealed thus far indicates that Zee has developed into a significant player in the entertainment sector, as seen by the numerous accolades and honours it has received. Also, Zee’s marketing tactics and campaigns are innovative; we also looked at the company’s competition level, and SEO strategies and, last, we looked at the company’s social media presence.

If you like such in-depth analysis of companies just like the marketing strategy of Zee Entertainment Enterprises, check out our IIDE Knowledge portal for more fascinating case studies.