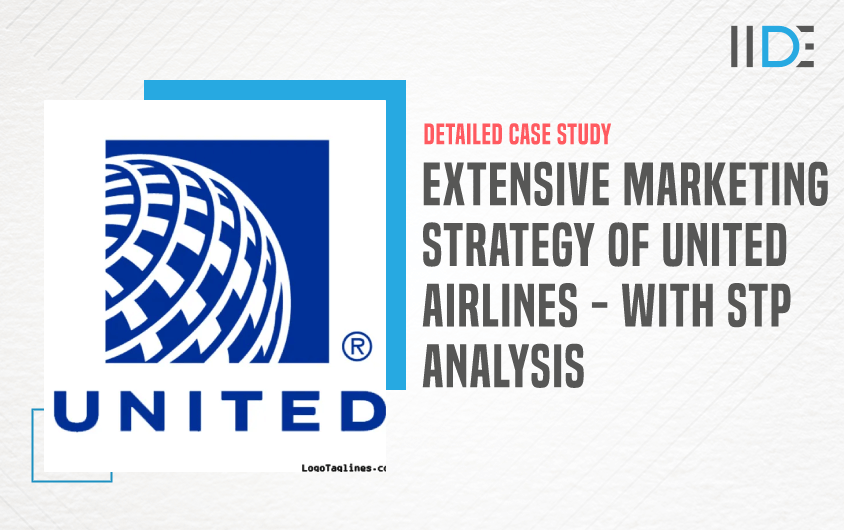 Previously we looked into the enthralling SWOT Analysis of United Airlines, one of the world’s leading airlines in the United States. In this case study, we will analyse the marketing strategy of United Airlines.

With the purpose of “Connecting people and uniting the world”, United Airlines is serving millions of people all over the world, from its formation to the present day. This formation has made United Airlines the world’s third-largest airline. They are constantly focused on providing customers with digital tools so that they can have a smoother and faster travel experience.

Identifying the growth of mobile bookings and introducing redesigned applications according to users’ feedback have helped United airlines grow a lot. So, any company needs to stay digital today. So, if you’re interested in keeping up with the latest developments, – check out Free Masterclasses on Digital Marketing 101 by the CEO and Founder of IIDE, Karan Shah.

Before starting with the marketing strategy of United Airlines, let’s look into the company’s history, products, and close competitors to get a better understanding. 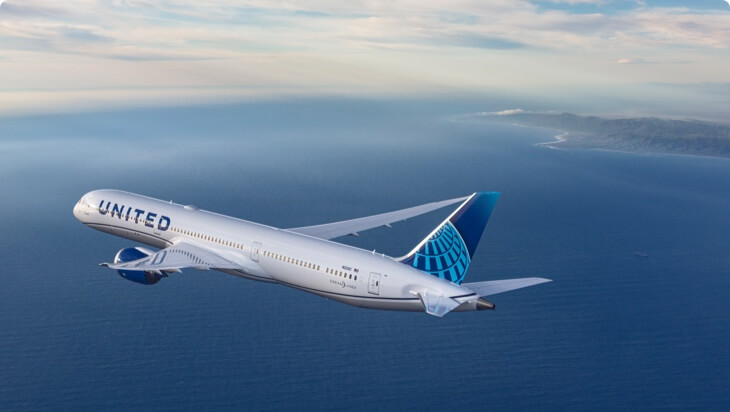 United Airlines is a leading American airline company headquartered in Chicago. It was set up in 1926 as Varney Air Lines but later the name changed to Boeing Air Transport. United Airlines is the third-largest airline in the world as it covers the largest number of destinations in the entire world. It provides air services for 1000 destinations in 170 countries and more than 700 aircraft are operated by it. It has a strong international route network and 10 international hubs of which George Bush International Airport is the largest hub.

Airlines have traditionally divided passengers into two distinct categories based on their trip purpose: business and leisure. Leisure travellers come to relax, have fun, and have a good time. Business tourists, on the other hand, travel to promote their company.

United Airlines Airlines is using a Single Segment Strategy. It is currently focusing on business class passengers. United Airlines is attempting to engage its target audience by emphasising that it provides everything that business travellers want. They accomplish this by placing advertisements in broadcast and other national media.

Sky miles, a renowned frequent flyer program offered by United Airlines Airlines, is a large and well-known reward program. Customers can earn miles by travelling with United Airlines or one of its affiliates, or by utilising partner firms such as credit cards, hotels, and auto rentals. The mileage credit may be used to book flights or join one of United Airlines’s Sky Clubs.

United Airlines has a long history of a strong game memorable advertising campaign from which the campaign called ‘Good leads the way’ commercial air travel reached historic new heights during the pandemic.

The commercial is full of firsts, feats and feel-good things experienced by whoever got connected with the airlines! Because this is the story of an airline when Good Leads The Way.

Like this, there are numerous marketing campaigns and ad content that appeared on board United planes and in airport terminals, as well as on TV, billboards, streaming platforms, digital, social and “through unique, contextually relevant and unexpected spaces,” per the company.

United’s original “Come Fly the Friendly Skies” commercials highlighted the modern age of air travel, and Continental’s “We really move our tail for you” advertisements set the standard for airline advertising. Continuing to reach new heights, United’s “It’s Time to Fly” campaign, launched in 2004, masterfully illustrated the way United served the travel needs of that time and demonstrated great new offerings like Economy Plus® seating. 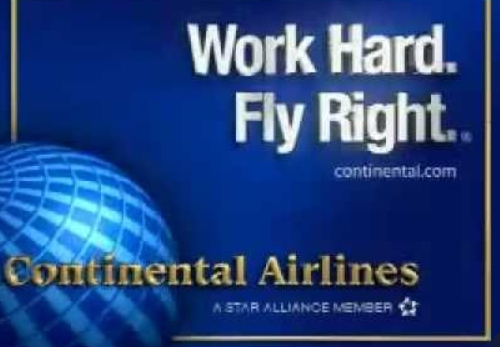 Continental’s “Work Hard. Fly Right.” advertising, launched in 1998, demonstrated keen insights about business travel and spoke to customers in a witty and refreshing tone are some of the amazing ad campaigns conducted by United Airlines since its establishment.

Social media marketing is critical when it comes to gathering the audience at large and no wonder a brand like United Airlines uses it to its full advantage. 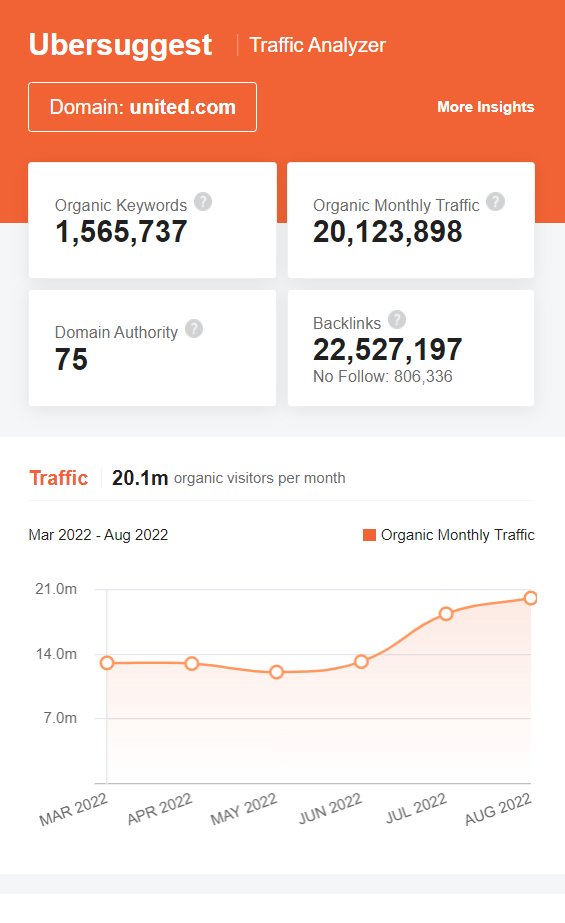 Also, the monthly traffic is approximately 20 million, which is again incredible. This demonstrates that United Airlines has a flawless SEO plan in place, as well as a willingness to work hard enough to maintain the brand flying in the Google organic SERP rankings.

EMPLOYEE INFLUENCERS ON UNITED AIRLINES – United is turning to savvy employees to bolster its image across social media platforms, enlisting flight attendants and baggage handlers to post pictures and commentary.

Attendants and employees were seen posting some beautiful shots on social media platforms. Encouraging employees to be social media influencers. That itself builds external and internal brand loyalty.

You may book a United Airlines flight online by going to the official website and selecting ‘book.’ Then input the destination and arrival airports, as well as the kind of travel (one-way, round, or multi-city), departure date, and passenger number.

Options such as refundable fares, which reimburse a portion of your fare in the event of cancellation, ‘shop with miles’ which allows you to buy your flight using points earned, and ‘my dates are flexible’ which finds you the cheapest deals, may be used to narrow down your search.

You may also save money by booking your United Airlines travel via Yatra.com, Makemytrip, goibibo etc. and many more online flight booking apps.

The “United Airlines App,” United Airlines’ mobile platform, was created with the consumer in mind to improve the travel experience at every stage. Customers can use it as a travel companion, finding, booking, and comparing flights, paying with digital wallets, checking in, receiving live notifications, and even tracking their baggage.

Most significantly, the platform is built for flexibility and responsiveness: owing to a hybrid strategy of cross-platform and native development, United Airlines can swiftly adapt to market changes and introduce new features.

United Airlines has created a separate website to update us with all the news in the form of online articles.

Digital platforms and social media are prominent firms’ most popular promotional methods in the airline business. United Airlines Airlines’ website and app are the primary marketing and promotional outlets. Social media, on the other hand, is one of the most popular platforms for promoting, publicising, and exchanging information with passengers and followers all over the world.

If you like such in-depth analysis of companies just like the marketing strategy of United Airlines check out our IIDE Knowledge portal for more fascinating case studies.