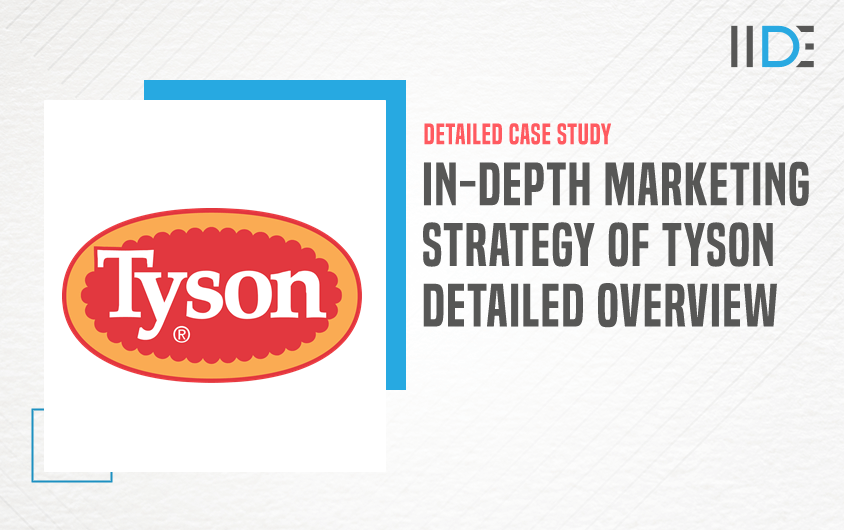 In this article, we’d like to help you gain insights into Tayson’s journey from delivering chickens to regional markets in the Midwest to becoming one of the most recognizable and respected brands worldwide. Tyson has had a very long and inspiring journey till today.

In one’s company’s DNA, marketing plays a crucial role in making or breaking it. Marketers have followed users into the digital realm as they go digital across the world. In case you are interested in digital marketing, you should definitely check out  Free MasterClass on Digital Marketing 101 by Karan Shah, the CEO and Founder of IIDE.

This blog will provide a comprehensive look at the marketing strategy of Tyson Foods. Let’s begin by learning about the company’s story, digital presence, and target audience before delving into its nuances.

If we dig into the past of Tyson foods then we will find out that it started its first field operations back in 1931. As the Great Depression raged, Tyson Foods began to grow. As a result of an opportunity change, John W. Tyson moved his family to Springdale, Arkansas, in 1931. Midwestern markets begin to receive chicken deliveries.

The company opened its first processing plant in 1958 with a capital of 90,000 dollars. As of today, the company offers three essential services: baby chick sales, feed sales, and transport of chickens to markets. In 1972, the company name changed to Tyson Foods, Inc., as we know it today.

A Tyson Foods announcement was made in February 2019 that the company had agreed to acquire the Thai and European operations of BRF SA, which includes processing plants in Thailand, the Netherlands, and the United Kingdom, to extend its value-added protein offerings globally.

Tyson has done an exceptional job staying on top of its target audience and staying innovative at the same time. Let’s take a look at the changes they’ve undergone.

Tyson has segmented its audience to know better, the buying behaviour of its customers. As customer behaviour is heterogeneous, it has been segmented on the basis of age, income, gender, lifestyle, values and other factors. By doing this, it can understand and collect customer-specific information.

After having collected this information and dividing the large and diversified customer market into smaller ones, Tyson chooses whose needs match the company’s resources. After that, it targets them on the basis of growth potential and commercial attractiveness of the segmented section.

To position its audience, Tyson has modernised its $1 billion brand, created tomorrow’s iconic brand and changed the game with a new growth structure. This was done to create a positive image of its products in the mind of the customers. This helps it position its audience in a better way. 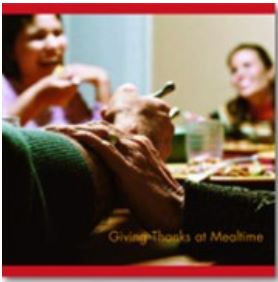 New $70 million multimedia ads were launched by Tyson Foods Inc. named “Thank You”. In place of the longstanding “Powering” campaign, this will be the company’s new marketing campaign. Beginning June 11, 2007, a new campaign will be launched. According to Carolyn Rehbock, Tyson’s VP of insights and innovation, “the new campaign will show consumers how Tyson’s products help mom be a hero at mealtime.” 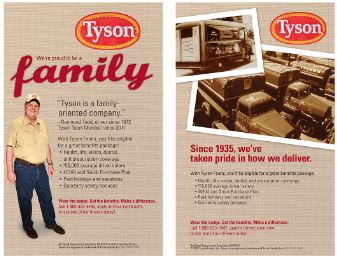 In order to ensure a safe and reliable transportation service, Tyson recruited the best drivers. Current drivers were surveyed as part of the process. As a result of the survey results, Tyson was able to identify the top reasons behind drivers’ choices and use them as the basis for its marketing campaign.

The ad campaign features 7 testimonials from current drivers. Drivers wear uniform shirts with this background and logo. A driver magazine found at truck stops was used to advertise the ads. Many ads were posted on the web pages of driver recruitment companies.

After the campaign, Tyson has seen an 18% increase in the applications of better and more qualified candidates. 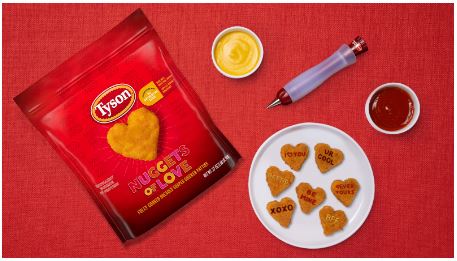 Tyson nuggets have a sweet way to help you say “I love you” this Valentine’s Day. A limited-edition Sauce Stylus is being given away by the brand; simply fill it with your favourite dipping sauce and start writing. The Tyson brand’s Instagram giveaway announcement post now until January 31, 2022, offers nugget lovers the chance to win a Sauce Stylus by tagging their valentines and using the hashtag #SayItWithNuggets and #sweepstakes. A total of 250 valid entries will be chosen at random to receive a Sauce Stylus and a coveted bag of Tyson Nuggets of Love.

Tyson regularly shares their updates on each social media account.

It is considered bad for a website to have less than 500 keywords, better to have more than 1,000 keywords and amazing to have more than 10,000 keywords. There are 59,659 organic keywords on https://www.tysonfoods.com/, which is more than impressive. A good SEO strategy has resulted in good results, proving that it has adopted a good strategy. The majority of its traffic comes from online searches, as we have seen already.

In addition, organic traffic is 235,390+ per month, which is pretty impressive. Because it ranks at the top of the search engine result pages, it doesn’t need to improve its SEO strategies. 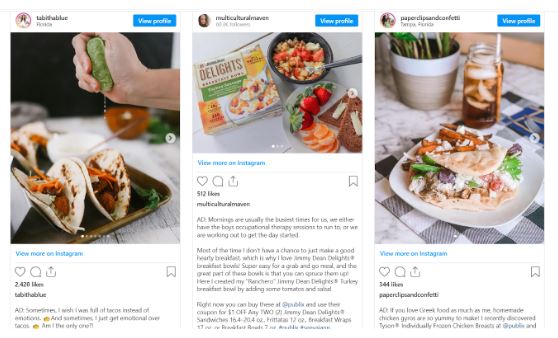 Tyson has always been a brand that adopted all the marketing trends and has shown consistent growth in its annual chart. They also have adopted the influencer marketing culture at their abode.

This influencer marketing campaign was a success for Tyson, they got 10M+ reach through social media platforms, and 48k+ engagement. It is huge.

Tyson, for now, has no mobile apps. But if it does, it will help its customers in many ways. They will be able to place an offer in just a few minutes and won’t need to run errands for the same. With that, it will help Tyson to have a close eye on customer behaviour and know their needs and meet their expectations easily.

The Tyson Foods Company is able to gain a new understanding of the unique wants and needs of digital consumers and their visual shopping preferences by using proprietary artificial intelligence technology developed by Boston-based startup Visit. The software predicts what aspects of an image or design will resonate most effectively with Tyson’s core consumers, such as how fresh meat is prepared and packaged, usage suggestions, or the amount included in the package. In order to more confidently add Tyson Foods products to shoppers’ digital shopping baskets, Tyson Foods prioritises which products should be featured, and where.

As we all know that the audience wants to know more and more about the brand or business from which they are making any purchase. Tyson is providing 360* solutions for all of its costumes and audience globally. They focus on valuable content that can help their audience to better understand the vision of the brand as well as to make them aware of what they are serving to the world.

Tyson foods have been able to develop a good reputation around the world. In addition to McDonald’s, KFC, Burger King, Taco Bell, and others, it supplies its products to all brands. But Tyson is facing challenges regarding environmental safety and worker health, and it is all Tyson’s fault. Tyson must improvise soon through internal meetings in order to resolve these problems.

Tyson has been an amazing brand not because of its diversification as well of their values and customer satisfaction. They started with a vision and now emerged with the whole world. Tyson is keeping all the marketing strategies aligned with the world trends and in this way, they are nailing the global market today.

If you like such in-depth analysis of companies just like the marketing strategy of Tyson check out our IIDE Knowledge portal for more fascinating case studies.