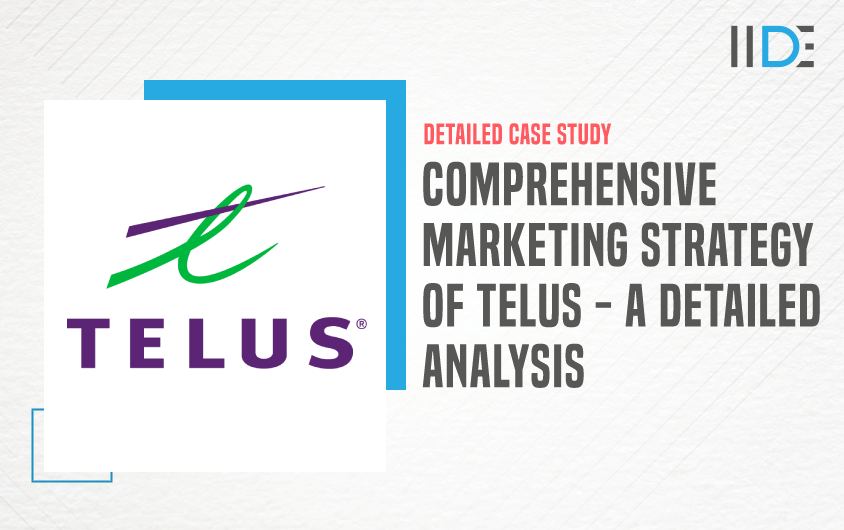 In our past article, we had done the SWOT analysis of Telia. In this article, we will see the marketing strategy of Telus, a telecom organisation.

Telus Corporation is the parent company of Telus telecommunication, Telus Health, Telus Mobility and Telus International. It is a telecommunication company based in Canada providing a wide range of telecommunications products and services including internet access, voice, entertainment, healthcare, video, and IPTV television.

Telus Corporation has built a name for itself through its services and its adaptive marketing strategy like digital marketing for the new tech-savvy era. If you are anxious about learning what digital marketing is and how to use it to your advantage – check out our Free MasterClass on Digital Marketing 101 by the CEO and Founder of IIDE, Karan Shah.

In this case study, we will learn about the SWOT analysis of Telus. But first, let us know about the company and the product better.

Telus Corporation is a publicly listed Canadian multinational holding company and conglomerate that owns the Telus Communications, Telus Mobility, Telus Health, and Telus International businesses. Telus was established as a holding corporation by the Alberta government in 1990. After acquiring Edmonton Telephones Corporation in 1995, it became the sole provider of telephone services in Alberta. It announced a merger with BCTel in 1998, and the two companies joined in 1999. Telus became Canada’s second-largest telecom service provider after Bell as a result of this merger. Currently, Telus holds a 22% market share in Canada.

Market Position: Telus has a dominant market position being the leading network provider in Canada. Since its beginning, the company’s growth has enabled it to generate new revenue and diversify the economic cycle risk in the areas it serves. 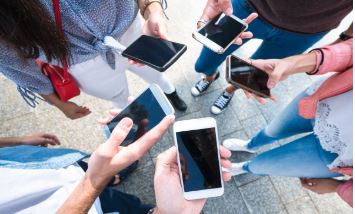 TELUS Wise missions are intended to teach and enable Canadians to remain safe on the web. Created in an organization with the Canadian Association of Chiefs of Police, Smart Social is planned to assist youth with remaining safe on the web and being smart in virtual entertainment.

Find out about all that from associating with the web to video talking in this video series. 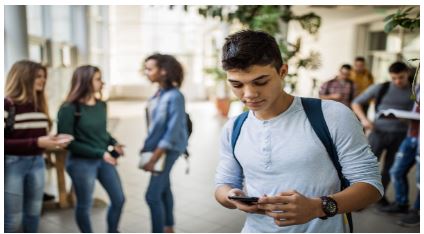 You might be feeling better to discover that quantifiers take and send sexts (bare or semi-naked photographs) than you might suspect. Notwithstanding, close to half of youth who have sent a sext say that the beneficiary then imparted that picture to others. Made in an organization with MediaSmarts, this mission means to end the way of life of sending personal pictures of others. 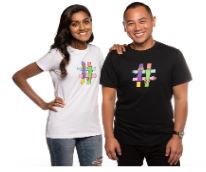 Digital Safety Tips with The Next Step: Mean Comments

Did you know cyberbullying influences 1,000,000 children consistently in Canada? This mission assists drive with changing with the TELUS Wise Digital Pledge while raising assets for #EndBullying programs across Canada. Telus partnered with Degrassi, Backstage and Next Step for digital safety advice.

Telus has a very well-organised posting routine which makes sure that each Social media platform gets equal attention.

Telus has ensured that its social media footprint grows every day. Posts related to telecommunications, web series promotions, and promotional videos spread access to all forms of media and attract a lot of eyeballs. The company can be found everywhere from Linkedin to Instagram to Twitter and Youtube. 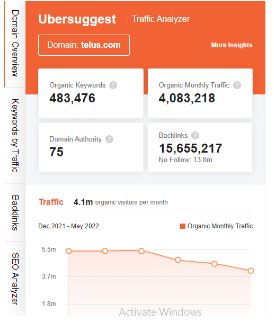 According to SEO rankings, the number of keywords – below 500 is bad, above 1000 is good, and 10,000+ is amazing. As one can see, https://www.telus.com/ has 483,476+ organic keywords, which itself is considered excellent. That means Telus’s digital marketing strategies are gaining a lot of traction and are working well.

Furthermore, the monthly traffic is approximately 4M+, which is an excellent figure. As a result, Telus has clearly made efforts to optimise its search engine results and is reaping the benefits effectively, as evidenced by the numbers.

Telus has not been associated with involvement with influencers. It doesn’t use influencer marketing.

In the eCommerce strategies, the brand called Telus has an online platform for customers to explore Telus offerings and products that they can buy online. They have their own website and The Telus company sells electronic devices, mobile phones, internet packages, TV packages etc. and more.

Telus also keeps its content interactive, giving a personal vibe to its client base. Informational content is also a major boost to their imprint as more and more people refer to each other and help them build a community.

One of the industry’s top providers of ICT solutions and services, Telus Company has a solid track record as a network expert. It is one of the greatest French mobile communications businesses, serving millions of people around the country.

If you like such in-depth analysis of companies just like the marketing strategy of Telus check out our IIDE Knowledge portal for more fascinating case studies.