The objective is to learn and gain insights into Sun Tv Network and how it became Tamil Nadu’s leading Tv network. The main objective of the company is, through a structured talent assessment, you can attract, engage, and promote talents, as well as maintain the protracted endurance of strong senior management and stay ahead of the competition.

Marketing has become an important aspect of an industry’s DNA which may make or break its sustainability. As users all around the entire globe relocate to the online world, marketing has got on board. Since you’re interested in current digital marketing, IIDE’s Free MasterClass on Digital Marketing 101, hosted by our CEO and Founder, Karan Shah, is a must. 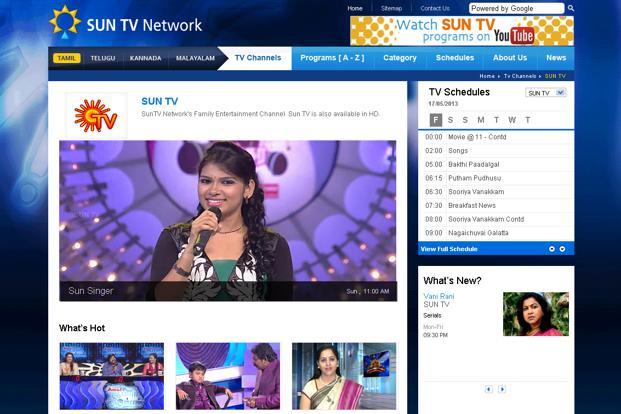 Sun Tv Network is an Indian TV and radio network based in Chennai, Tamil Nadu. It is one of Tamil Nadu’s leading Tv networks and is managed by the Sun Group. Kalanithi Maran started the business on April 14, 1992, and now it holds a range of television channels and radio stations in many language families.

In May 2000, they started Sun News, a news and current affairs service, following the debut of Sun TV. In October 2002, again they launched KTV, a 24-hour Tamil cinema channel with a strong concentration on films and film-related programming. In September of 2004, they established Sun Music, the first 24-hour Tamil music channel. This channel broadcasts both film and non-film-related programming. Sun-News, KTV and Sun Music were all turned to paid channels later on.

Segmentation – Different age groups of people are rambling in the market to share their views regarding a particular brand. Sun Tv Network has focused on both low and high-end consumers, this gets mirrored in their products and services too. Rural consumers also have a major part of Sun Tv’s targeted group.

Positioning – It is currently streaming Tamil Film Music from Glory Days as a Historic network. As the Sun Tv Network has grown mainly organically in entire India still it is shining brightly in South India.

Through contests and interactive surveys, Facebook and Instagram witnessed over 4.85 million engagements in the first week of the campaign. During the duration of the campaign, the official Facebook page had a 300 percent increase in followers, with around 22 million views. Sun TV had a 20% boost in brand mentions during prime time week over week.

Sun Tv Network can be found on Facebook, Instagram, Twitter, and YouTube. With a bunch of followers. Given below is the table showing the number of followers on each of their social media handles:

Sun Tv Network’s social media marketing strategy is outstanding, as we can see from the follower and subscriber counts. They are mostly active on Facebook and Youtube, where they have 7.7 million followers and 16.8 million followers. If you see their Facebook, you can see lots of promotions, education and more related to Sun Tv. 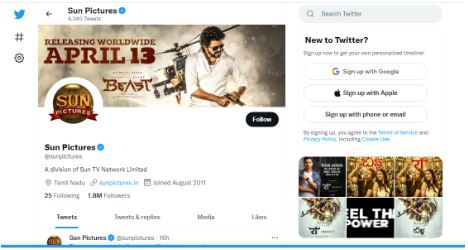 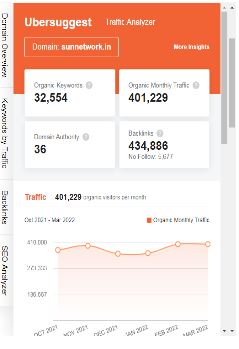 As per SEO ranking, it is said that the Number of keywords – below 500 is bad, above 1000 is good, and 10,000+ is amazing. As we can see that Sun Tv Network has 32,554 organic keywords and it’s considered outstanding. That means the digital marketing of the Sun Tv Network is gaining a good number of insights.

Also, the traffic per month is around 400k+ which is known as exceptional. Hence, the Sun Tv Network is successful in its SEO strategies while it worked hard enough to keep the brand soaring in the Google organic SERP results. If you want to learn more about SEO in-depth, check out our short term SEO course through which you can extensively learn SEO.

Using mobile sync technology across Facebook, Instagram, and Twitter, the company targeted fans of competitor broadcasts in advert breaks via Silverpush. Exclusive promos, streaming videos, promotions, and media integration via prominent Tamil YouTube channels dominated the sustainability phase, which aims at enhancing enthusiasm for programming content. They also made viral memes centred on characters in the show and entertaining episodes that they dispersed across different location-based mobile Chat groups.

The company has begun to profit from its own OTT system Sun NXT, which was earlier intended to deliver normal programming. Presently, online earnings are included in subscriptions. Sun NXT app alone has 20,000 everyday installations, as per the organization, and has been bringing in subscription service earnings of Rs 5 crore without spending much on exclusive programming, generating an income of Rs 60 crore from the network annually. 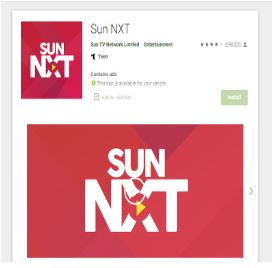 This app provides you with a network in all 4 Southern Indian languages – Tamil, Telugu, Malayalam, and Kannada – to watch live TV, movies, kids’ shows, news, comedy clips, catch-up, Video on Demand (VOD), originals, music, and much more. Watch it on your favourite devices, like mobile, iPad, computers, smart TV, and devices, anywhere at the time as well as from anywhere.

Showcases of the app:

As a consequence, Sun TV came up with a plan centred on a tri method. The firm assessed the targeted group’s media consumption trends across sectors. Popular online platforms, themes, information forms, keywords, patterns, language, as well as other factors, were reviewed. The questionnaire survey was used to gather views on existing staff and to assess the longevity of characters in the show and television celebrities.

In contrast, social networking activity and the influence of play promotions on judgment were observed. Whereas Facebook and Instagram delivered a bigger screen engagement with exclusive promotions, behind-the-scenes visuals, and contests, YouTube drew in-market and association viewers who were watching comparable or competing material.

Sun Tv Network’s main skill is the ability to control costs, with a % net income in marketing. The business is rising at a 10% rate, whereas the free cash flow is rising at a 9% pace. There is no notable change between Operating Cash Flow and Net Profits, showing a good allocation of capital.

As we all know, digital marketing has taken a drastic change because of pandemics that affected every business. As per digital marketing statistics, about 60% of the population of the world uses the internet. It rose by 20% in the past two years due to the pandemic with many businesses going online. An established company’s image is everything. The right campaign strategies can make or break a company’s brand image. Through digital marketing, effective campaigns can be designed and the scope of fixing any glitches immediately is there.

With the increasing importance of digital marketing, learning about the growing field is an important step. If you would like to learn more and develop skills, check out Online Digital Marketing Course to learn more. Or else you can attend one of our free online masterclasses held by IIDE’s CEO, Karan Shah which will give you a glimpse into the world of digital marketing.

If you like such in-depth analysis of companies just like the marketing strategy of Sun Tv Network, check out our IIDE Knowledge portal for more fascinating case studies.

Thank you for taking the time to read this, and do share your thoughts on this case study of the marketing strategy of Sun Tv Network in the comments section below.