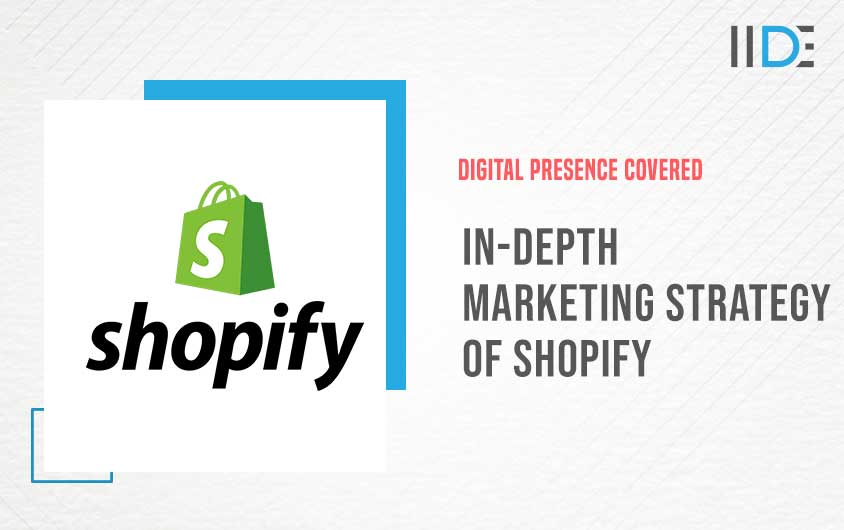 Let us know more about Shopify 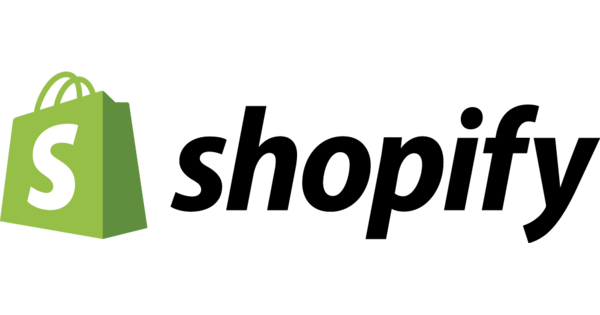 Shopify is a multinational Canadian e-commerce company. Shopify implies only a simple thing – “Anyone anywhere can start an eCommerce website”.

At first, it was started to sell snowboarding equipment online. Later it was created by using the open-source web application framework. Snowdevil was launched as Shopify in June 2006 by its founders. Shopify is also the name of their eCommerce platform.

They help you build your brand online with an eCommerce store and a custom domain. As an e-commerce software, Shopify allows you to track sales trends and order records, manage inventory, customize the look of your online store, and add in sales channels.

Now, as we know a brief about the company, let us learn about the marketing mix of Shopify.

The marketing mix contains 4Ps of Market, they are as follows:

Shopify is a commerce platform catering to all sizes of businesses, whether they are online, offline, or on social media. Shopify not only helps us to sell products, but it also helps to grow business. Shopify can provide services for:

In 2010, Shopify launched a loose app and gave traders but every other manner to manipulate online sales. In 2013 Shopify unveiled the main platform redesign, Shopify 2, that blanketed over 60 new features. 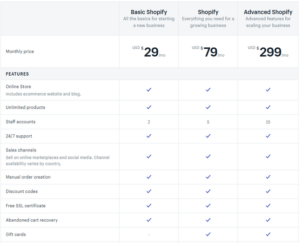 At first, Shopify offers 14 days of free services for their customers and gives their customers full access to create a website. Shopify gives an option that after 14 days if the customers want to disclose their website it allows them to do that. Here they attract more customers.

After the trial version, if the customer wants to continue their website they provide services through some pricing. The below image shows their subscription pricing.

Shopify is a multinational company so they offer every shopkeeper in the world to sell their products everywhere in the world. It offers its services to even small retailers to industries. Shopify is trusted by thousands of entrepreneurs in 175 countries.

Now, as we are well versed with the marketing mix of Shopify, let’s see the target audience the company is catering to

Now, we know the marketing mix and target audience of the company. Let us now learn about the SWOT analysis of Shopify. 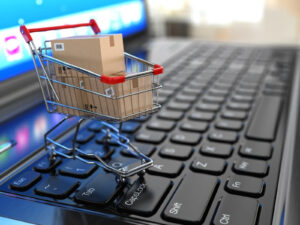 SWOT Analysis is a tool used in an organization to track the strengths, weaknesses, opportunities, and threats. It is important as it helps in tracking what you are good at, and what improvements you can make for the better functioning of the organization. Here is a complete SWOT Analysis of Shopify:

Shopify possesses numerous strengths that made them cover 18% of the total market share in the eCommerce industry. Following are some strengths of the company:

Shopify has to work on its weaknesses and have to improve in these areas to capture new markets and be the top player in the existing market. The top weaknesses of the company are:

To be the leading player in its market, Shopify has to take action to start implementing all the possible opportunities they have in the market.  Shopify’s opportunities are as follows:

In the technology industry, Shopify has some threats which can disrupt their business, and they have to work on it. The threats are as follows: 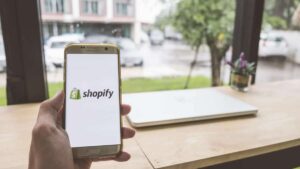 1. For Shopify, there is no brand ambassador for promotions. It promotes by giving small merchants the tool for e-commerce. This created a huge ecosystem in 2009 by launching its Application programming interface(API) platform and application. E-commerce is a highly individualized business. Every business wants to give an amazing buying experience to their customer, but providing so many features will lead to difficulty in using the interface

2. In 2010, Shopify launched a loose app. Shopify Mobile became a game-changer as it allowed dealers to screen their online stores, appear up client information, and satisfy orders from their phones—simply as “m-commerce” aka Mobile commerce started flourishing. More people have been getting smartphones and shopping and promoting online. This became a big possibility to command a brand new channel, and Shopify got onto peak because of it

3. Shopify additionally stepped up its efforts to sell e-trade through launching the “Build a Business” competition. This contest challenged shop proprietors to begin a shop over eight months. They created excessive-stakes to gas enthusiasm: the maximum a hit agency could win $100,000 and get mentorship from celeb entrepreneurs

4. In 2011, Shopify assisted 11,300+ stores and produced over $125million in sales throughout the stores. With such a lot of customers of all levels, Shopify desired to increase and get the right entry to expert support. They launched Shopify Experts, which became an “online listing of skilled Shopify pros” that had substantial information about Shopify and that could skip down recommendations to the less skilled sellers

6. In 2013 Shopify unveiled the main platform redesign, Shopify 2, that blanketed over 60 new features

7. In 2014 Shopify overhauled its app to house offline sales. The new Shopify Mobile sync with Shopify POS (Point of sale)

8. In 2015, Shopify brought “Buy Buttons” as a manner to promote content from any website — instead of just being an e-trade storefront. Users can upload Buy Buttons to the websites that they make with WordPress, Squarespace, and Tumblr

9. In 2016 To merge the customized contact of offline trade with the ease of e-trade, Shopify brought integration with Facebook Messenger. Merchants may want to talk with clients about orders and supply them with real-time providers in an extra private channel

10. In 2017 Shopify closed the distance between online and offline purchasing even similarly with Shopify QR codes. These permit buyers to test a code on a bodily object with their telecoil smartphone digital digicam and at once get right of entry to the object withinside the merchant’s online store

In this blog, we learnt about Shopify, what is its marketing mix, and how it uses the 4Ps to its benefit, then we saw the competition of Shopify. Needless to say, Shopify is a leading platform in the eCommerce industry and uses various marketing strategies effectively in order to remain on the top.

We hope that this case study is helpful and to get more insight into the marketing strategy of Shopify. Let us know your suggestions in the comments.

Also, If you enjoyed reading this case study and want to know more about the Marketing strategies of various brands and market leaders click visit IIDE’S  knowledge portal