In-Depth Marketing Strategy of Publix – With Campaigns and Target Audience 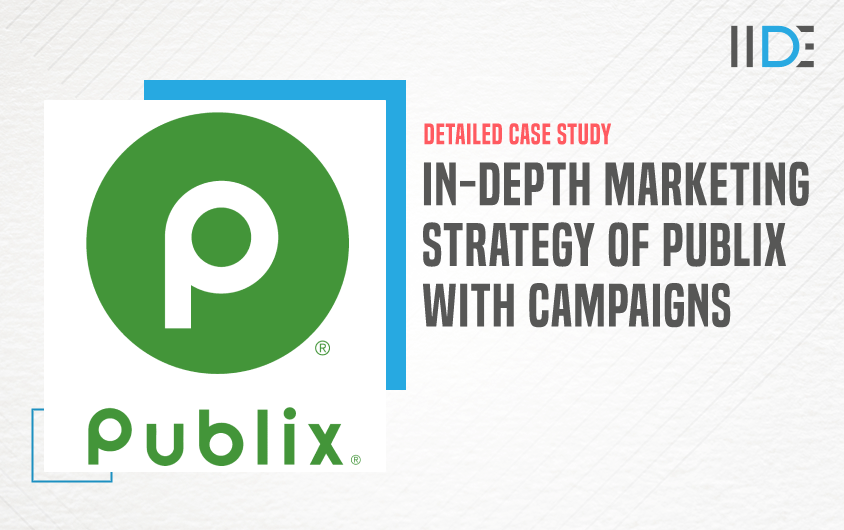 In the previous article, We learned about the SWOT analysis of Publix. In this blog, we will try to study and decode the marketing strategy of Publix – The largest employee-owned grocery chain in the United States.

The main objective of this blog is to provide our audience with a well-rounded insight into the world of Publix. How the company operates, the culture it abides by, the way it markets itself amongst much more.

The world has gone online now and having a digital presence is as important as the product/service itself for the company.  So, if you are really interested in taking your Digital game up a notch, try our Free Masterclass on Digital Marketing taught by our Founder and CEO Karan Shah.

We will learn the entire marketing strategy of Publix by the end of this blog. However, before diving right into it, let’s learn a little about the company, its digital presence and its target audience. 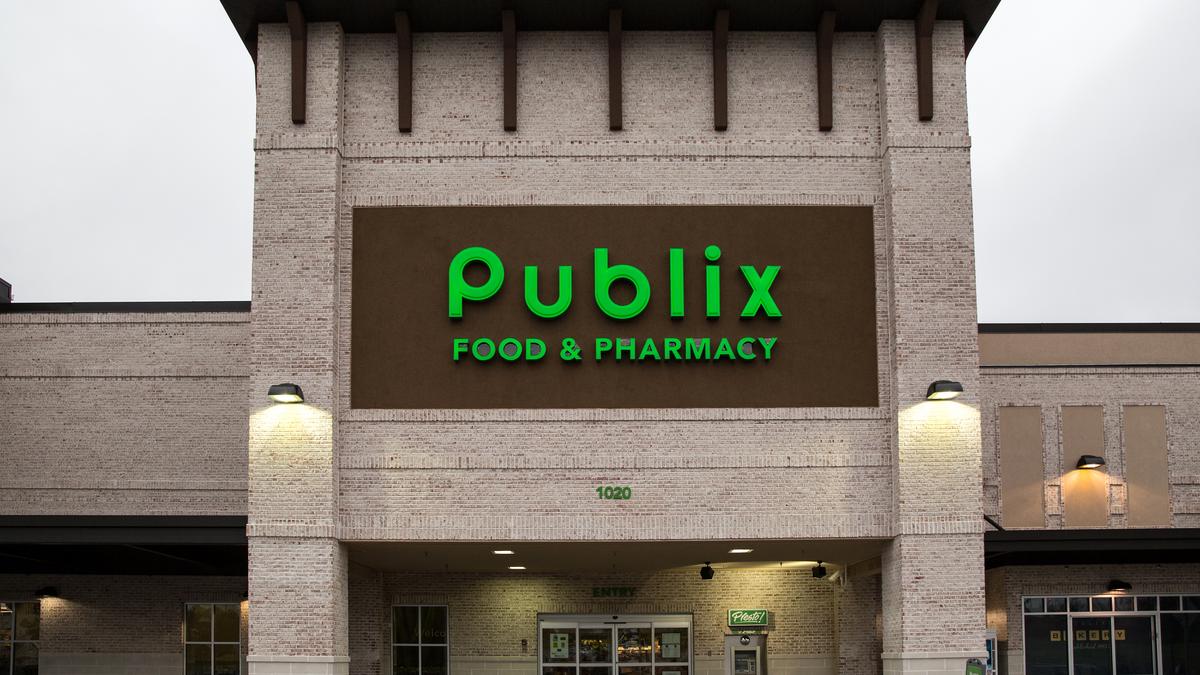 Publix supermarkets are frequently known as Publix and are headquartered in Lakeland, Florida. The founder of Publix is George W. Jenkins. It is a family autocratic company that is wholly owned by previous and current employees and members of the Jenkins family.

Publix operates in 7 nations of the Southeastern United States which include Florida, Georgia, South Carolina, North Carolina, Virginia, Alabama, and Tennessee. Publix is a widespread business that operates in various areas of public needs such as pharmacy, food market, cooking in school, restaurants, grocery, dairy, bakery and other food products.

Publix focuses on the younger generation as its target market and offers a lot of opportunities to younger people for scholarships or half prices to name a few. Whilst, they target younger people. Publix also tends to play the long game when it comes to repeat customers.

Somewhat like Apple, Publix also offers a mix of high-end products which once accustomed to at a young age. The youth of today will return to and potentially even become buyers of other high-end sophisticated products.

Publix has positioned itself as the smartest of the people. Creating a sense of belonging. However, it has also managed to create a position wherein they are not only catering to the middle and lower middle class but has products for which even the rich buy. The following campaign has been a longstanding one for sure. The campaign includes commercials and videos across TV and Social Media giving out special recipes or teaching how to assemble furniture.

The main selling point for this feature has been the emotion of “gratefulness” that a customer feels after not only getting a product but also getting allied benefits for free. 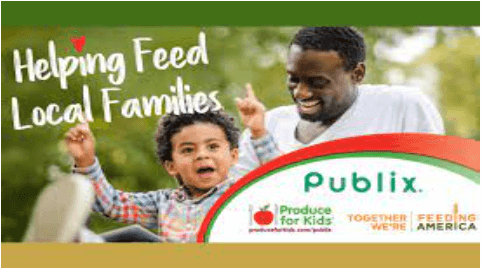 The following campaign is one of the most recent campaigns that Publix implemented during the Covid Era. The main aim of this campaign was to showcase the love Publix has for its customers. This campaign involved extra produce being donated transparently to Feeding America.

One of the more peculiar steps taken by the company involved the labelling of each item with its respective nutritional content. A small step which conveyed to the people that donations could help a lot of people.

Having fed over 11 million people in 2021, this campaign bought a lot of goodwill.

This ad Shows salt shakers being passed around by generations of family members to each other at a table with a lot of food and a lot of smiles. Similar ads echoing Togetherness were published regularly and created a sense of togetherness rather organically.

Publix has ensured that its social media footprint grows every day. The food recipes and DIY videos spread access to all forms of media and attract a lot of eyeballs. The company can be found everywhere from Linkedin to Instagram to Facebook to Twitter and Youtube.

Facebook is definitely the strongest Social Media platform for Publix when it comes to followers. However, this does not signify a different strategy, but rather just the time spent on a particular platform.

Publix has a very well-organised posting routine which makes sure that each Social media platform gets equal attention. 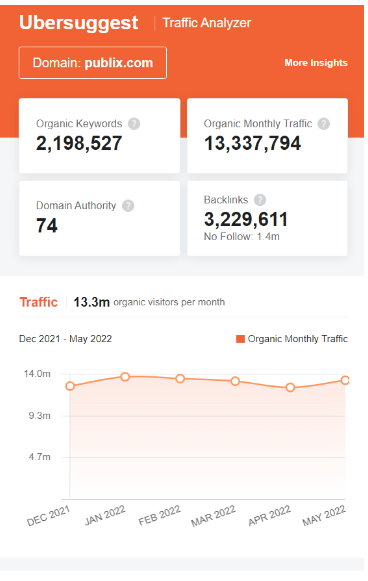 With over 2,200,000 Keywords and over 13 million visitors per month. It is fair to say that Publix has its SEO strategies rather sorted out. A majority of their traffic is organic from the posts they make and for a supermarket, the visits also act as enquiries about their products. A wide range means the average conversion rate is better than most other sectors as well.

Publix has culturally steered away from influencer marketing and celebrity endorsements. There have rarely been any global celebrities featured in their Commercials over the years. However, the company has time and again featured people who have done something for society in different fields. “Mr.George” is probably the only celebrated individual who is always remembered on important dates.

Apart from this, Publix has shone the spotlight on customers giving their reviews of the store or Employees describing their experience at work. The only possible time Publix roped in a celebrity was during pride month in 2016. They called Football(Soccer) icon Alex Morgan for an autograph signing at one of their stores.

Due to Covid, every major business in the world has had to shift towards E-Commerce business. Publix has implemented the online delivery system very well. One of the biggest benefits it provides is that there are no add-on costs involved for delivery. The price at the store and the delivery you get at home are the same.

The Publix app is operational at all the locations the company has physical stores. The App has a store locator which helps you recognize the nearest store to you. The App like other Supermart applications also rewards frequent customers with points that help them avail discounts.

The UI is interactive and easy to use as well. The App cannot be compared to the scale of Amazon but at the same time is enough to serve the store’s purpose of allowing customers to avail of their services online.

Publix also keeps their content interactive, giving a personal vibe to its client base. Informational content is also a major boost to their imprint as more and more people refer it to each other and help them build a community.

Publix has not tried to go global yet and that is probably its biggest strength. They know that they have a story that resonates with the area they run operations in. They have been visited by members of a family for generations and the family-based marketing has created a homely bond with the brand.

We should not underestimate or undervalue the benefits that can be achieved by implementing digital marketing into the core of any business. Individuals and organisations have fully embraced this fact and are working towards incorporating it into their business. The right campaign strategies can make or break a company’s brand image and determine how a company’s image is viewed. Effective campaigns can be designed through digital marketing. Learning about the growing field is an important first step.

If you like such in-depth analysis of companies just like the marketing strategy of Publix check out our IIDE Knowledge portal for more fascinating case studies.