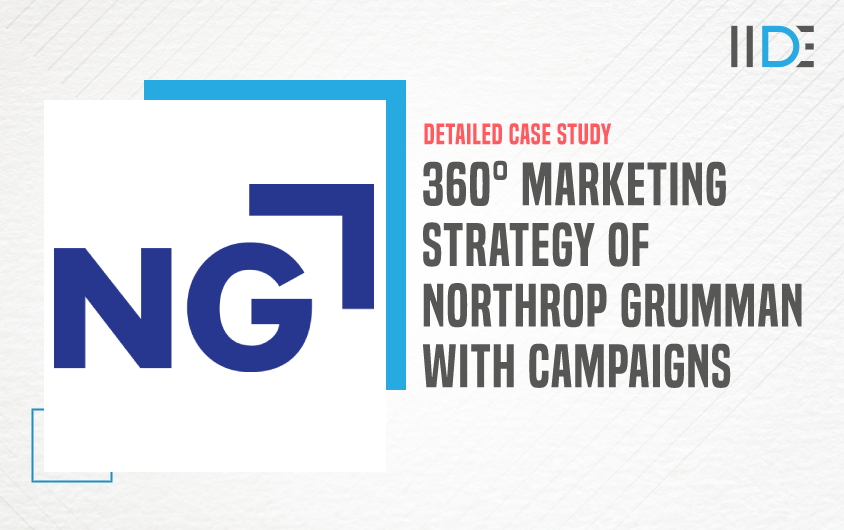 The objective is to learn and gain insights into Northrop Grumman corporation and how it became one of the world’s largest weapons manufacturers and military tech services.

So it’s quite clear now that marketing is the essence of any business. With the right strategies, one takes its business to the next level. If you are curious to know more about marketing then do check out our Free Masterclass on Digital Marketing by the CEO and founder of IIDE, Karan Shah.

By the end of this blog, you will get to learn the entire marketing strategy of Northrop Grumman. Before diving deep into it, let’s begin with Northrop Grumman’s story, target audience and online presence.

Northrop Grumman Corporation( NGC) is an American multinational aerospace and defence tech company. With 80,000 employees and annual revenue of over $30 billion, it is one of the world’s largest weapons manufacturers and military technology providers. The company operates through its four reportable segments: Aeronautics systems, defence systems, mission systems, and space systems.

This company was founded by John Knudsen Northrop ( an American aircraft industrialist and designer) in 1939 in California. After the end of the Cold War, Northrop went on a series of acquisitions where they bought noteworthy companies named Grumman Aerospace, Westinghouse and TRW Inc. Kathy Warden is the chairman, CEO and president of Northrop Grumman. NASA funds the company.

The primary customer of Northrop Grumman is the U.S Government, principally the department of defence and the intelligence community. Approximately 85.05% of the company’s total revenue comes from the U.S government. Their remaining target audience is international agencies, commercial agencies, and state & local governments.

The Northrop Grumman is segmented into 4 categories: Space, Aeronautics, Mission and Defence systems. The company generates most of its revenue from the Space segment.

The company solves the most challenging problems in space, aeronautics, defence and cyberspace to meet the ever-evolving needs of its customers. They made sure to deliver superior capability in tandem with maximised cost efficiencies. 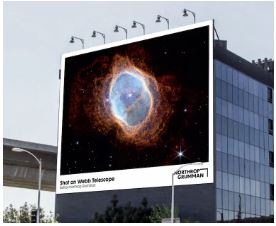 Northrop Grumman teamed with Dentsu creative for its “Not Shot On An iPhone” ad campaign in order to highlight the awe-inspiring power of the web. The campaign was launched on 25th December 2021.  Poking fun at Apple’s influential “Shot On An iPhone” platform, the campaign features OOH elements like billboards, posters etc. in Washington, D.C as well as Los Angeles where the telescope was built at the company’s Space Park facility.

The campaign was successful and spread a lot of awareness. Spending on OOH advertising skyrocketed by more than 40% in the first quarter of 2022 compared to 2021 with the Out of Home Advertising Association of America (OAAA). 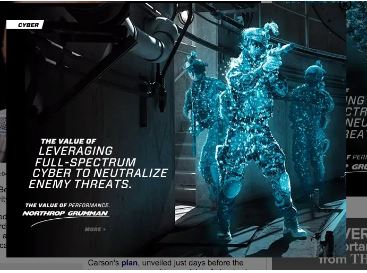 Northrop Grumman started a campaign “The value of performance” in 2016 with the mission to leverage full-spectrum cyber to neutralise enemy threats. The Northrop ad campaign helps explain cyber’s appeal: virtual soldiers dropping into the battlefield, zipping through laser grids, and shutting down communications before magically teleporting away. War is messy and cyber is as harmless as a game of Call of Duty. This campaign was successful and gained a lot of popularity.

This campaign was started when a candidate for president named Ben Carson stated that they needed to secure and advance America’s online presence. That was a major cyber opportunity for cyber brands selling cyber weapons to the nation’s cyber forces. That’s when defence contractor Northrop Grumman took this opportunity to start the cyber campaign.

Northrop Grumman has invested a lot of money in social media channels and has got a great response from people. They believe with the right strategies, they can spread awareness among large sets of people.

Moreover, the backlinks are about 2,596,041 which is amazing too. Thus we can say that Northrop Grumman is using the right SEO strategies to help improve its website’s ranking.

The company’s suite of Web-based OpenTrac (TM) systems helps control the supply chain and links communication between a business and its trading partners. OpenTrac Director(TM) enables B2B transaction communications to and from suppliers and customers.

The system tracks material shipments from producers, toll processors, service centres and warehouses to large manufacturing, trading and distribution companies. The company has advanced IT solutions and online business services for government and commercial clients.

Northrop Grumman company has a great content marketing strategy for its online platforms that have led to the growth of the company. They ensure that there is the right strategy on the right platform. They are very active on their social media platforms and post articles regularly related to technology, redefining traditional perceptions of the definition of “possible” and the impacts of tech developments in new and surprising ways.

They engage their audience through CTAs that link to Northrop Grumman’s careers page, related articles, catchy titles, and a monthly newsletter that rounds up a group of articles that all speak to one of the many themes throughout their content. Each article is carefully optimised in order to align with Google’s most current search algorithms to maximise performance.

Northrop Grumman is one of the leading companies in its industry. It maintains its prominent position in the market by carefully analysing and reviewing its marketing strategies.

As you know now the majority of the company’s revenue is derived from the US Government and its agencies, which leaves Northrop vulnerable to unforeseen circumstances, such as the US government terminating contracts, changes in defence approvals, changes in congressional appropriations, and changes in government regulations which could unfavourably affect its business operations and market share.

So the company should focus on other potential customers too so that it is not solely dependent on the government and risk its profit and market share.

Over the past few years, the company has invested a good amount of money into the online platform. This investment has opened a new sales channel for Northrop Grumman. In the next few years, Northrop Grumman can leverage this opportunity by knowing its customers better and serving their needs using big data analytics.

If you like such in-depth analysis of companies just like the marketing strategy of Northrop Grumman check out our IIDE Knowledge portal for more fascinating case studies.