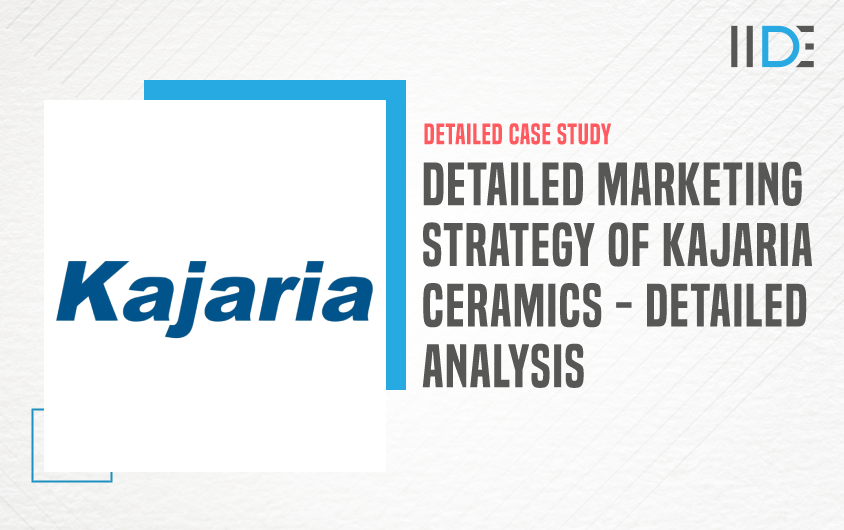 In our last blog, we discussed the SWOT analysis of Kajaria Ceramics. Now, for this blog, we will be presenting the ins and outs of the marketing strategy of Kajaria Ceramics, India’s largest ceramic/vitrified tile maker company that has been chosen as a superbrand of India for 12 consecutive times in a row.

Kajaria Ceramics has 8 factories all across India with advanced technologies where they produce high-quality tiles that would meet the customer’s expectations. Their tiles are exported to more than 35 countries around the globe. It is the most certified ceramic tile company in the world.

Kajaria Ceramics has been in operation since 1988 A.D. i.e. for more than 3 decades now. Throughout such a long time, the dynamic nature of the business environment has brought major alterations in the way it markets its products/services.

In contemporary times, the old paradigms of marketing are not very effective, so, the company has adopted new marketing tools and techniques, particularly digital marketing which has a huge contribution to making it stand at the no. 1 position in India as a tile manufacturing company. If you are interested in new-age digital marketing, then you should check out IIDE’s Free MasterClass on Digital Marketing 101 by the CEO and Founder of IIDE, Karan Shah.

Kajaria Ceramics was incorporated on 20th December 1985 at Kanpur and launched an initial public offering (IPO) in September 1988. Ashok Karanjia is the chairman and managing director of Kajaria Ceramics.

The company is equipped with cutting-edge technology i.e. incorporation of the latest and high level of IT developments and concepts. They offer a wide variety of 2800 design options in ceramic and vitrified tiles. It is India’s no.1 tile company and the 8th largest manufacturer of tiles in the world. The company is taking India to the international level and is making India proud.

The company is well aware of how corporate social responsibility should be fulfilled. So, it got membership in Indian Green Building Council which assures that production in Kajaria Ceramics is done by keeping sustainability and longevity in mind through an eco-friendly approach.

Kajaria Ceramics fulfils the 7 components or the 7 Ps of the marketing mix which is beneficial for them to gain a competitive advantage and surmount business challenges. The company does not have any reluctance when it comes to the application of modern marketing techniques and forms strategies that suit best modern times.

Market Segmentation is the division of customers into different categories on various basis like gender, preference, price, location, etc. The market segmentation of Kajaria Tiles comprises;

Target Market refers to the market segment i.e. taken as a focal point among the many market segments. In the case of Kajaria tiles, their target market is tile dealers and builders from urban areas. Outside of India, they are open to diversification and global networking, however; SAARC nations are their target market due to similarity in preference of tile designs.

For market positioning, the unique selling proposition(USP) of Kajaria Ceramics is the supply of high-quality products produced through cutting-edge technology along with the fulfilment of corporate social responsibility(CSR). 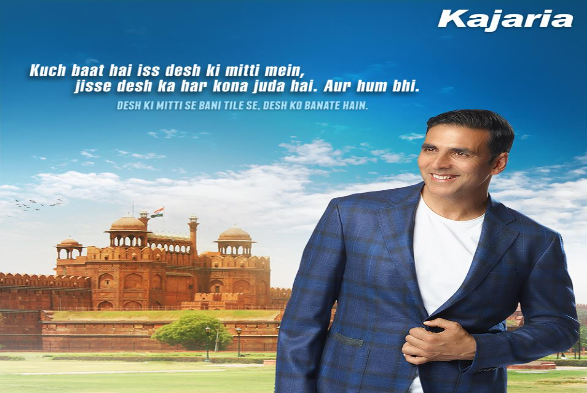 “Desh ki mitti” campaign of Kajaria Ceramics is one of its most successful campaigns. The advertisements under the campaign have Akshay Kumar who is one of the most famous Bollywood actors. He is their brand ambassador for the promotion of the campaign. The reputed actor is popular for his choice of movies with patriotic aspects which certainly contributed to developing an emotional attachment among the viewers who are also prospective customers. This campaign aligns with the official tagline of the company i.e. “Desh ki mitti se bani tiles se desh ko banate hai.”

The other campaign of Kajaria Ceramics is concerned with the fulfilment of corporate social responsibility. For this campaign, they joined hands with Shuddhi NGO to make the Yamuna River stretched across Delhi a cleaner place. The campaign comes under the nationwide campaign of “Swachh Bharat Abhiyan”. The campaign certainly succeeded as it followed a wonderful initiation of the Government of India. 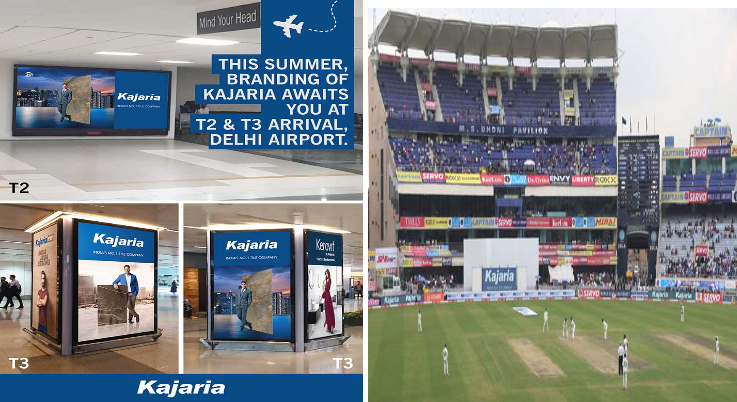 Kajaria Ceramics has a strong presence on social networking sites. It has become convenient for customers to reach out to them and for the company too. It has become relatively easier now to reach as many people as possible than three decades ago when it first started.

So, where can the company be found? These are the links to their social networking sites;

They are active on all the aforementioned social media sites. They have the highest number of followers on Facebook. Their social media sites inform their followers about new product launches and make promotional posts. They display their latest tile designs and update about new campaigns. 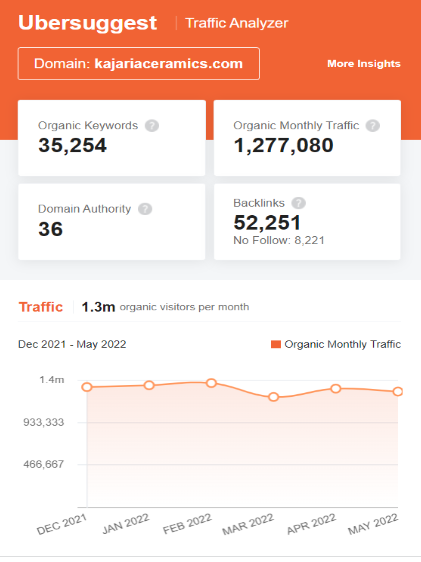 Kajaria Ceramics uses SEO to the fullest extent. The site attracts free traffic i.e. organic keyword of 35,254 through SEO which is a significant achievement. It drives 1,277,080 organic monthly traffic which is again noteworthy. This proves that Kajaria Ceramics is fueled by a foolproof SEO strategy along with working hard enough to keep the brand soaring in the Google organic SERP results.

Bollywood superstar Akshay Kumar is the face/brand ambassador of Kajaria. He has been featured in multiple advertisements of Kajaria Ceramics under the campaign “Desh Ki Mitti”. His patriotic personality aligns with the patriotic theme of the organization.

Apart from the tile industry, Kajaria has also laid its hands on faucets and sanitaryware under the name Kerovit which is a subsidiary company of Kajaria Ceramics. Kerovit has Anushka Sharma and Ranveer Singh as their brand ambassadors.

The products/services of Kajaria Ceramics are only available at physical stores. Hitherto, they only have an e-catalogue on their website that displays all its tile designs, however; if someone wants to purchase them they have to either contact them or the dealers they are connected with.

Kajaria Ceramics has launched applications with a mobile-friendly approach. The apps are available on Google Play Store and App Store. The apps are application versions of their websites and give the same information as on their website. In the app, they have their social media links, products display, brand campaigns, catalogues, investors, etc.

Kajaria Ceramics has a section on their website which is completely dedicated to blogs related to the company. The major content of their blog covers the information related to designs, textures, collections of their tiles, and other products.

Their posts on social media sites are well-structured, brief, and clear which entices the social media users to know more about their products. The company also gets featured in top-selling newspapers of India and significant news related to them is broadcasted on top Indian broadcasting channels.

In the presence of countless tile manufacturing companies around the globe, the element that sets Kajaria Ceramics apart from other companies is its motivation and feeling of loyalty to give back to the country through optimum utilisation of the resources available in the nation. Its tagline “Desh ki mitti se bani tiles se desh ko banate hai” sounds nationalistic which promotes the support for the goods manufactured in-home nation.

Along with the impassioned marketing technique, it ensures catering of quality goods produced by high technology through the fulfilment of corporate social responsibility.

Kajaria Ceramics has incorporated digital marketing in a commendable way. Its marketing largely depends on digital platforms and through this case study, we can comprehend that there is a balance between organic and paid digital marketing campaigns for the company.

If you like such in-depth analysis of companies just like the marketing strategy of Kajaria Ceramics check out our IIDE Knowledge portal for more fascinating case studies.