Detailed Marketing Strategy Of CSCEC – The Largest Contractor In China 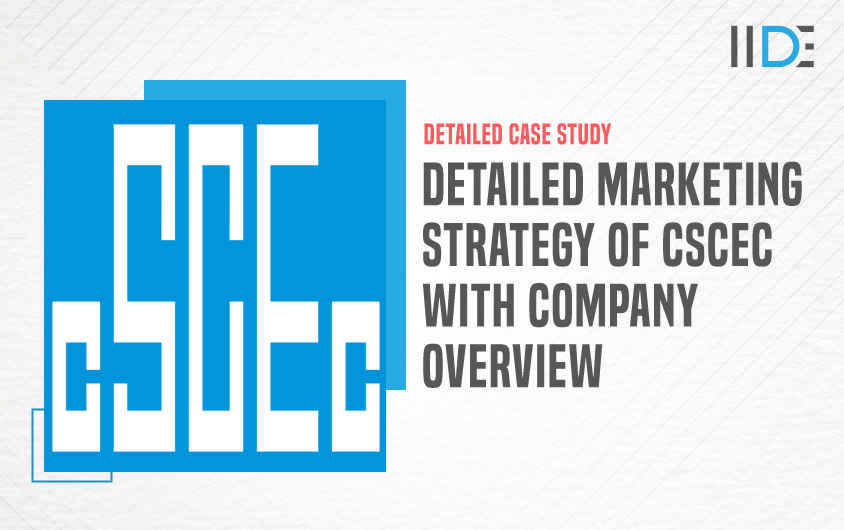 In a previous article, we learned about the in-depth SWOT analysis of CSCEC. In this blog, we will have a deep insight into the marketing strategy of CSCEC (China State Construction Engineering Corporation), the largest contractor in China.

The objective is to learn and gain insights into CSCEC and how it became China’s largest contractor.

In today’s world, the Internet is gaining more importance and marketing is the backbone of every business. So if you are a marketing professional or a business person or someone who wants to know more about marketing or online marketing, then do check out the Free Digital Marketing Masterclass by Karan Shah, the Founder of IIDE.

CSCEC is the biggest construction firm in the globe by income and the 14th biggest general free-lancer concerning overseas sales, as of 2016. While most of the properties of CSCEC were glided in the stock market as China State Construction Engineering Corporation Limited (CSCEC).

It was founded in 1957 as a state company with the purpose of founder Yu Tao to start a road construction service. The country had a global profile of construction-heavy industry and infrastructure in Asia, Africa, and the Middle East. It’s also constructing the new Athletics and Football Stadium in Grenada.

The targeted audience is simply any individual or firm that wants to construct any infrastructure for residential or commercial purposes. The government can also be an integral part of the audience that can be attracted to the company’s offerings. The company can also act as an investor in other infrastructure-based projects.

The marketing people at CSCEC need to select competitive advantages that are best suited to CSCEC’s marketing approach. CSCEC marketing managers can create perceptual maps to better understand the competitive positioning of different brands in the market. And utilise the marketing mix and promotion mix, position the brand as a provider of greater value to the target segment and successfully communicate that position to consumers.

The mission aimed by the company is being truly achieved by their construction of the infrastructures for instance Shanghai Disney Resort a man-made modern-day marvel which is delivering happiness to thousands daily. The infrastructure and housing developments that were undertaken by the company have facilitated a steady boost to China’s economy.

The company led to steady growth by offering the best services and economic responsibilities shortly after its establishment. The new company was on top of its game from the very beginning.

When it comes to promotion, CSCEC has put in a lot of work. They ensure that promotional initiatives are of high quality. China State Construction Engineering invests in a variety of promotional methods, including newspapers, radio, television, and online. The corporation also has well-targeted CSR efforts that indirectly aid promotions by reaching out to the general public. Through marketing, the company assists CSCEC in expanding its customer base. They have effectively used the internet to establish their presence, resulting in a large consumer base because many people outside of China are aware of the country’s potential and fame. 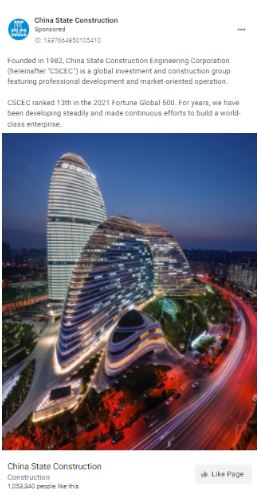 The above ad campaign was done in March 2022 to reach the maximum audience available. The company chose the page likes campaign for the growth of the company’s presence in the market. 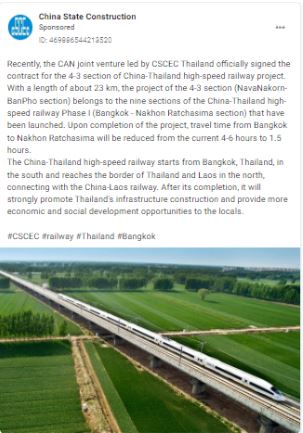 The above ad is a smart move by the company as it represents news to the audience but also carries an important message about the next infrastructural project of the company, and the benefits post completion of the project is quite welcoming, hence the upliftment of the company in the eyes of the general public.

The estimated audience size of the company was greater than 1 million but the amount spent on the ad campaign was less than 100 USD, so the campaign made only around 8–9K impressions, which may include multiple views by the same people. The major target audience was the male gender. 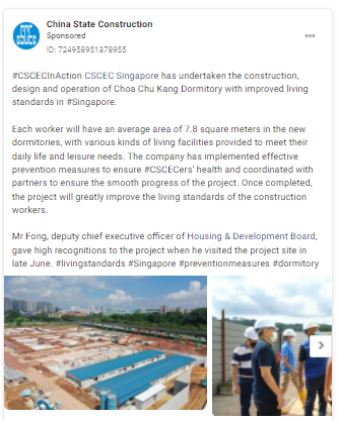 The above ad is again a smart move by the company as it not only carries news to the audience but also carries an important message about the project of building a dormitory and the benefits post completion of the project are quite welcoming, hence the upliftment of the company in the eyes of the general public as well as the construction workers.

Again, the estimated audience size of the company was greater than 1 million and the amount spent on the ad campaign was less than 100 USD. This time the campaign made 10k–15k impressions. The major target audience was the male gender. 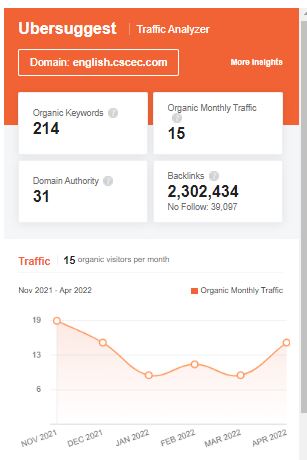 As per SEO ranking, it is said that the number of keywords below 1000 is bad, and as we can see, https://english.cscec.com/ has 214 keywords, which are not at all good, which means the digital marketing of CSCEC is poor.

Also, the traffic is 15, which is the worst for such a big company. Hence, CSCEC needs a lot of improvement and focuses on SEO strategies.

The company does not use this mode of marketing.

The design emphasizes the importance of teamwork, focuses on practical issues, and prompts timely thinking. It is an innovative practice to use modern technological means to solve management difficulties.

As we can see, the main focus of the company is to post information online on social media platforms (content marketing). They are very active there. But the company lacks marketing efforts, especially in other aspects of digital marketing. As the digital space is experiencing a boom in today’s world, a company needs to do better digital marketing.

If you like such in-depth analysis of companies just like the marketing strategy of CSCEC, check out our IIDE Knowledge portal for more fascinating case studies.