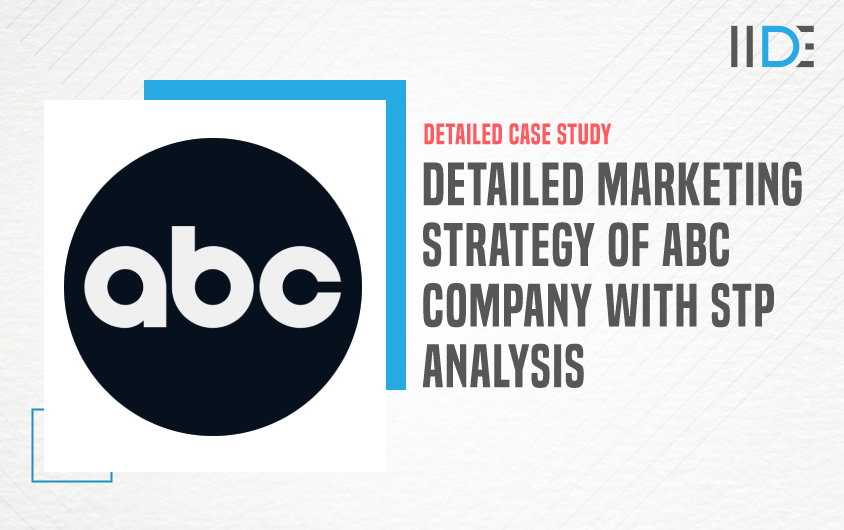 In the previous blog, we learned about the in-depth SWOT analysis of Motilal Oswal Financial Services. In this article, we will discuss the marketing strategy of ABC Company.

ABC Company – is an American commercial broadcast television network which is also a flagship property of the ABC Entertainment Group. Today, we are going to elaborate on its marketing strategies including, STP, SMM, SEO, influencer marketing, e-commerce etc. and more.

Marketing efforts by ABC company played a major role in what massive it is now. As the world goes online, marketing is changing and if you are curious in learning about the latest – check out our Free MasterClass on Digital Marketing 101 by the CEO and Founder of IIDE, Karan Shah.

In this study, we will look into the marketing strategy of ABC Company. First let us get to know the company overview, targeted audience and STP analysis.

ABC company network is headquartered in Burbank, California. American Broadcasting  Company is an American commercial broadcast television network serving as the flagship property of the ABC entertainment group division of the Walt Disney company. ABC has eight owned and operated and more than 230 affiliated television stations throughout the United States and its territories.

ABC provides several services video on demand, ABC HD etc. In 1943 the company launched radio broadcasting services as the successor of the NBC Blue network which was purchased by Edward J Noble in 1948 it extended its operations in television networks also.

This company was started on 15 may 1943 in 1945 to 1949 company owned by independently in 1949 to 1985 owner of the company is Capital Cities  and in 1996 this company was acquired by The Walt Disney Company. ABC entertainment group is the parent company of the American broadcasting company.

Now let us learn about the marketing strategy of ABC Company and their analysis and campaigns.

ABC Company segment itself as broadcasting operations almost exclusively to television. ABC has eight owned-and-operated and more than 230 affiliated television stations throughout the United States.

The target audience of ABC company is sports lovers, youngsters, adults to the last age because it is a broadcasting company who provide broadcast services of the live sports, comedy favorites, reality phenomenons, along with daytime talk shows it is one of the points where people like it.

ABC Company positions itself as the fifth-oldest major broadcasting network in the world and the youngest of the American Big Three television networks.

ABC does not conduct any kind of marketing campaign as it is a broadcasting company and it does not require any kind of advertising or promotion to grow its business.

People otherwise also are going to watch their favorite shows and programs on ABC channels, but ABC Company should always keep one thing in mind which is telecasting programmes and shows with good quality content.

The telecasted shows should be reasonable & make sense for the audience so that audience will always continue switching only between ABC networks ultimately helping ABC company to generate a rational amount of TRP on its network leading to immense business growth.

Instagram is more of an entertainment platform and ABC company exactly deals in the same area. Therefore, the number of followers on ABC Company’s Instagram page is high, the broadcasting network constantly posts on it and the posts are related to announcements of latest shows, grammys, awards, highlights to superstars and sport personalities, interviews etc. and more. Same posts are posted on Facebook and it reaches thousands of people.

The company is relatively active on social media and shares posts frequently because today people are going digital and so are businesses. So, to compete in this competitive industry the brand needs to work more on its social media handles.

Hey, If you want your business to get success on social media platforms or have a curiosity about how marketing works on these channels, then you must check out the short-term SEM course offered by IIDE in which you will get everything you are looking for to understand marketing on social media. 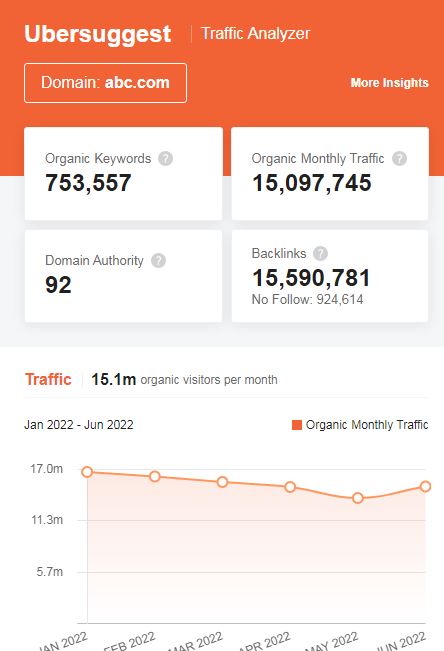 According to SEO strategy, considering the number of keywords – below 500 is poor, above 1000 is good, and 10,000+ is fantastic. As we can see one of the ABC Company subsidiaries – has 753,557 organic keywords & is considered superb.

However, if a company wants to set a benchmark before its competitors or remain at the top of its market, it must continuously work on its SEO techniques to attract a significant amount of organic traffic to its site, which leads to an increase in sales, which is beneficial to the company.

ABC Company doesn’t use this mode of marketing.

ABC company or ABC television network has an e-commerce website or more we can say a website where one can watch the latest web series, programs and shows either free or by purchasing a premium to unlock the locked ones.

ABC company’s website works more as a subscription and streaming services. Users can also check more about the company info and updates at ABC network through ABC’s website. As e-commerce actually means buying and selling of goods and services, primarily over the internet, so here ABC company’s business comes under service provider.

If you are interested in knowing more about e-commerce, then we at IIDE are providing an online e-commerce course that includes extensive training of this platform.

As we said earlier, other than broadcasting programmes on television, ABC company is also broadcasting the same on their website and are relatively active in providing services through the internet and digital media.

ABC Company updates its remarkable signs of progress through all social media pages. They are perfectly active on every social media platform and frequently partner with big brands and businesses.

In this blog, we have seen how ABC Company’s marketing strategy works. We also saw how adobe is gaining love and support as it is promoting creativity. In today’s world, almost every person is there on the internet and the value of good or creative content is increasing. This leads to an increase in demand for such facilities which are provided by ABC Company.

If you like such in-depth analysis of companies just like the marketing strategy of ABC Company check out our IIDE Knowledge portal for more fascinating case studies.