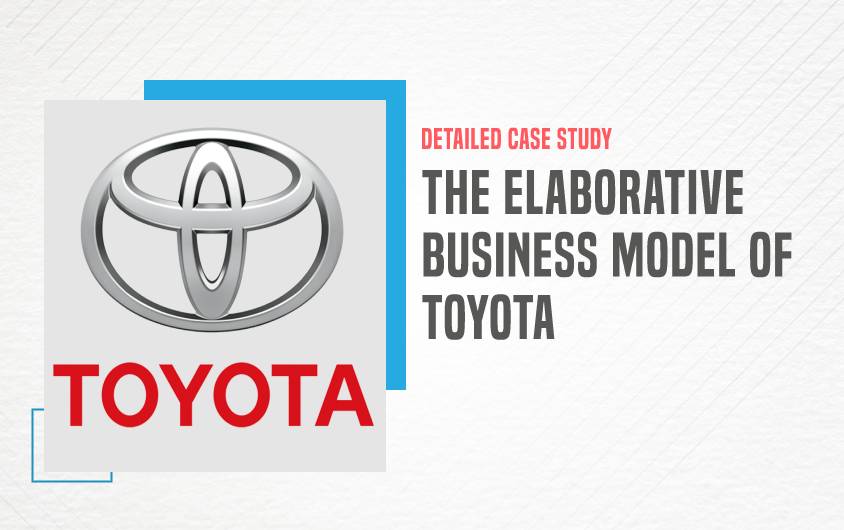 Starting from humble beginnings as the small Toyoda Automatic Loom Works, Toyota went on to become the “Best Selling Automaker “ in 2021, building a business empire from scratch. Toyota’s cars are known to be reliable and affordable, with a great reputation for their amazing engineering. The Japanese multinational automaker has been making innovative vehicles for nearly a century and its thriving in its position has been maintained very well.

Now you must be thinking about how Toyota succeeded in being the preferred choice of most people? And the answer lies in its powerful and targeted marketing strategies. As users across the world go digital, marketing has followed them to the digital realm as well. If you are interested in new-age digital marketing, then you should definitely check out IIDE’s Free MasterClass on Digital Marketing 101 by our CEO and Founder, Karan Shah.

If you are curious about knowing what Toyota does right in their business model and what helped them in achieving heights of success, then you are in the right place. In this blog, we will be going through the Business Model of Toyota, revealing the company’s promotional and marketing strategy, competitor analysis, market share, product offerings and pricing model.

So let’s begin by learning a bit more about Toyota first.

Toyota Motor Corporation, commonly referred to as Toyota, is a Japanese multinational automaker. It is headquarters are located in Aichi, Japan. It was founded by Kiichito Toyoda on 28th August in 1937, as a part of Toyota Industries which started as a machines manufacturer. Since then business has been managed by the successors of the Toyoda family. Currently, Akio Toyoda is the incumbent CEO of Toyota.

Today, Toyota is the richest car company in the world, manufacturing 2.3 million cars a year around the world. Just in 2021, the company was making $275.4 billion in revenues in the first quarter of the year.

The company got its initial boost because of the need for domestic vehicle production in Japan due to the war declared with China. The company produced its first passenger car (model A1) in May 1935 and the first truck (model G1) in August 1935.

Fast forward to today, Toyota has a car for every person to meet their individual needs. With competitive pricing and the use of cutting-edge technology, Toyota is preferred as a “Value for money” choice by the people.

The car manufacturing behemoth has survived and thrived over the last century and become a global force. The business model of Toyota is important to understand as it holds many keys to success in running a business and making it expand successfully. Their key focus has always been the customer and their satisfaction. In today’s age, that is more relevant than ever and the only way to keep a customer happy is with after-sales services and prompt communication. If you wish to learn more about reputation management in the modern era, visit the Online Reputation Management Course page offered by us.

In order to decode the business model of Toyota, let us start by looking into the company’s market share.

As of March 2021, Toyota Group is at the top of the Global market with a 12.6% share with 2.3 million Toyota cars being sold this year to date indicating an increase of 7.9% in overall sales. Toyota has great coverage worldwide and manages its product offering portfolio skillfully.

The brand is currently sold in approximately 200 countries around the world, with roughly 45% of total vehicle sales derived from Japan, and 52% of total revenue generated outside of Japan. In addition to sales by its core Toyota brand, the company also sells vehicles under the Lexus and Daihatsu brands. The major automakers Toyota, Nissan, and Honda control a combined 93% of the Japanese market.

This builds the market dominance for Toyota leading with a competitive advantage amongst the rest of the automobile brands. The next step to understanding the business model of Toyota is to understand a bit more about their target audience, let us have a look.

Toyota has its target group of customers who are in the age group of 30-50 having a middle-level income, with the need of a vehicle that offers good value for money. The uniqueness of Toyota cars is quality, safety, durability, sustainability, reliability, and innovation – a perfect combination of attributes that is looked forward to by its customers.

To successfully reach its target customers, Toyota uses multiple suitable strategies to meet its ends. Now let us look at how Toyota mobilizes its strategies in different aspects to stay ahead of the curve.

Toyota is a large company dealing in multiple segments, countries across multiple brands. In order to do a better analysis of the company and their efforts, we have divided the strategies utilized by them into four parts. Toyota is especially known for its amazing marketing efforts, if you wish to know more about that, check out a previously written article on Toyota’s Marketing Mix.

Without further ado, let us begin.

Toyota has a wide range of vehicles designed to meet mass mobility needs. Each product has its segment and its specific group of customers. Following are the product line of Toyota automobiles.

Toyota’s annual report mentions that it is making great sales despite the worldwide pandemic. Below information is a snippet of the Toyota sales report for June 2021 from the Toyota newsroom.

Toyota’s best source for distributing its products​ are dealerships, so it is vital to determine the venues where consumers can view the products. The strategy of Toyota stands on easy to find venues and good customer service.

Toyota tries to find how its customers can access automobiles through surveys and market research. Once the customer locates and reaches a Toyota dealership, they nurture hospitality while attending to their customers. They ensure that their visitors leave with a good experience in services provided by the staff.

The staff is recruited based on being able to discuss the company’s products, collect orders, take data and fill insurance. In addition, they also recommend the right models of Toyota cars for different customers to satisfy their demands.

They do not just focus on sales. All the product information and automobile data are precisely organized in Toyota’s system, which could provide reliable communication and convenient service to customers at affordable prices.

Toyota has an automobile to meet every person’s needs. Toyota has a range of automobiles starting from the lowest tier daily commute cars to luxury cars. Its pricing strategy has covered every price bracket range so that their customer can choose as per their needs and requirements.

This makes Toyota’s cars compete in every price segment and due to the number of Toyota car models and variants, it becomes a necessary step for Toyota to do cost optimization in some aspects.

Secondly, Toyota pays specific attention towards eliminating waste which leads to an increase in profits over time due to fair pricing, high quality, and low cost on maintenance. Creating a difference in the product helps the company to gain an advantage against the competition in the automobile industry. Toyota utilizes those cost-cutting profits on their promotion of products.

Toyota uses different mediums for its promotional strategies to meet its sales target volume.it advertises through radios, billboard hoardings, television advertisements, brand collaborations, product placements, word of mouth, and recently it has had a growing focus on digital marketing. Toyota has its unique way to promote itself:

The consumer targeting strategies do wonders for Toyota: from pitching their products along with tie-up with dealerships to solve the problems of logistics and powerful and targetted advertisements, make the customer more attracted to buy a Toyota car.

Let us learn more about the way the company generates and manages its cash flow.

In the business model of Toyota, the company generates 90% of its revenue with automobiles sales exclusively. The automotive business has four strategic subsegments through which cash flows in the industry and Toyota capitalizes on all of them:

Toyota automobile has been created not only to achieve synergies between similar vehicles but also to enable greater specialization in pursuing worldwide market growth for each product category.

A fair percentage of revenue is obtained by Toyota in ways such as :

Undoubtedly, Toyota is the #1 leading brand in the automobile industry according to multiple news articles papers, surveys, and the internet. Now, as we near the end of understanding the business model of Toyota, let us understand the Unique Selling Point or USP of Toyota.

The automobile industry is saturated with competition, with price being a key differentiator. Due to this, the industry is shifting from product differentiation to low-cost production. In a marketplace in which consumers are increasingly sensitive to price, Toyota has been able to build cars that are both fuel-efficient and affordable to maintain its lead in the auto market.

To tackle this problem, Toyota has come up with several core competencies that represent its uniqueness, or its USPs. Toyota’s key unique competencies include:

These were the pillars of Toyota’s business model which supported them to become the leader in the automobile sector globally in 2021. Let us now conclude this case on the business model of Toyota.

Toyota is all about a product that stands on customers’ needs and delivers more than customers’ expectations. For over 90 years, Toyota has been proving that affordable does not mean “cheap.” Instead, it represents a better value for your hard-earned money. To reach every customer of its kind, Toyota strategically uses its powerful and targeted advertising campaigns. Nowadays promotion of products takes place on online platforms.

Every brand prefers online promotion because it provides statistical data of the advertising campaign and gives useful insights about how the advertising is creating an impact on its customers base. You can also learn how to create an impactful and targeted advertising campaign by being a part of IIDE’s Online Digital Marketing Course which upskills you in all aspects of the rising digital marketing field.

Thank you for reading the case study and if you wish to add to the discussion, please leave your thoughts in the comment section below.