In-depth Research on the Business Model of Amul you need to know! 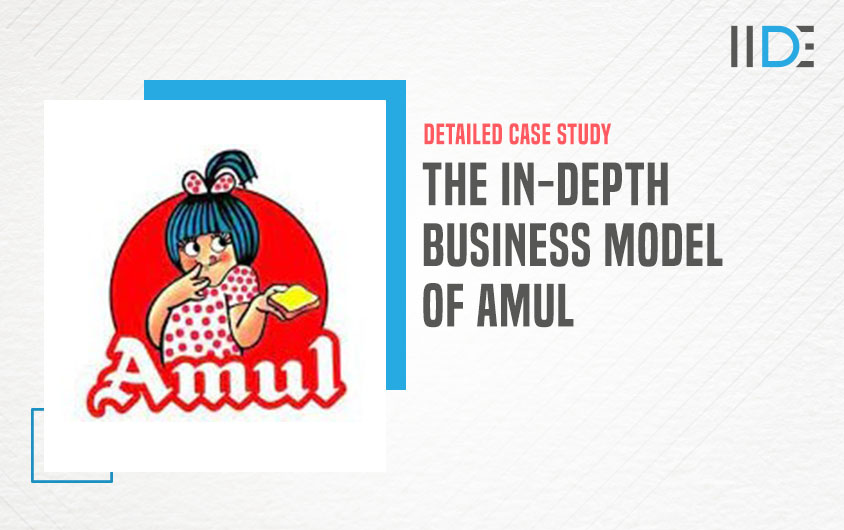 Amul is one of the oldest organisations operating in India! This article will take a deep dive into the business model of Amul.

Amul is an Indian dairy co-operative society that spurred India’s White Revolution and becomes the largest Milk and Dairy products Company in India. The business model of Amul has developed India as the largest milk producer. Around 15 million milk producers instill their milk in 1,44,000 dairy societies in the country.

In this case study, we will be taking a look over the business model of Amul, the marketing strategy of Amul, and the SWOT Analysis of Amul. Let’s first learn more about the company.

Anand Milk Union Limited (AMUL) needs no introduction as such because the whole nation knows about Amul being the biggest brand in the Dairy Products Society. The name AMUL itself is a big brand and has created this name and reputation by delivering the best quality Dairy Products all over the world. Amul was founded in 1946 by Verghese Kurian and is situated in Anand, Gujarat. The current CEO of Amul is R.S. Sodhi.

Looking at the business aspect of Amul, it caters best quality Dairy Products all over the world and is quite reputed. The success story of Amul is very attractive and exclusive. Today, whenever someone mentions, ice cream, milk, cheese, butter, or any Dairy Product, Amul is the first company that pops into our mind. One of the reasons for Amul’s great success is its innovation at each step.

Now you know the basic details about Amul which will give you a better understanding of the company. So now let’s move on to the Business Model that Amul follows and has had a great impact and reputation in the market.

Amul has a cooperative society model. It is a model where people get together and pool resources to grow in the market. The people who pool in the resources are members of this society. They take care of the finances, resources, and operations of this cooperative society.  The business model focuses on affordable prices for consumers, keeping in mind the interests of farmers. Let us dive into it.

The business model focuses on affordable prices for consumers, keeping in mind the interests of farmers. Let us dive into it.

First Tier – The first tier consists of the farmers from the villages who are a part of the Village Dairy Cooperative Society. All the villages in a particular State select their representatives who represent their village in the District Milk Unions. The Village Dairy Cooperative society is the First-tier in this Business Model.
Second Tier – The second tier consists of the representatives that the Village Society selects. These representatives then together manage the District Milk Union. These Unions take care of the milk and the milk products and are responsible for processing these products. After processing the products, they sell these products to the State Milk Federation.
Third Tier – The third tier of this model is the State Milk Federation. State Milk Federation sells the processed products that they receive from the District Milk Union and acts as a distributor and facilitates the selling of the products in the market. The revenue that is earned is distributed downwards in a similar fashion.

Now that we know the business model of Amul and get to know in detail about the Cooperative model that they follow, one might understand how successful and effective this model is. It shows how the benefits trickle down from the market and right to the producer who is at the bottom of the Pyramid. Now let’s move on to the marketing strategies that have made Amul a successful company.

We all know how successful and reputed Amul is. But do you know the reason behind this success? In this section, we will get to know the answer to this question and how Amul has maintained and continued a legacy for a very long time. The marketing strategies that helped Amul gain success are –

Amul promotes all its products under one brand name i.e., ‘AMUL’. This provides the company better brand visibility and reduces its advertising costs. The reputation of the brand name has been impeccable through the decades and still, its reputation is similar to when Amul came into the market decades ago.

As we saw, Amul caters its products to every segment of the society, be it kids, adults, senior citizens, rich, poor, all the segments of the society. It has always catered even to the economic segments without any compromise in its products. Products that cover a huge market segment and are used daily are tried and provided at an affordable price without any compromise in the products, hence giving them an advantage over their competitors.

One of the biggest marketing strategies that helped Amul gain success is its advertising campaign. Amul got its name in the Guinness World Record for the longest-ever advertising campaign. The Amul-girl, the cartoon figure, is used by the company to promote its brand. Their advertisements are related to the recent and trending events happening all over the world with a bit of sarcasm and humor.

Now that we know the marketing strategies of Amul, let’s take a look at their SWOT Analysis.

Amul has seen commendable growth in the past few years. The company continues its innovative and unique style of business to sustain its position. The company is setting its next target to achieve record sales with INR 50,000 crores target in 2020 to set a new growth record.

Amul is a brand managed by the GCMMF (Gujarat Co-operative Milk Marketing Federation Ltd), a cooperative body that provides about 17.7 million liters of milk per day.

Amul has a strong and loyal customer base because of its standard quality production. It has maintained its operations with required transparency for years and also maintained healthy relations with the government and health ministry.

The brand faced an internal crisis after it chose to advertise its products by disparaging its rival competitors and their competitors demanded that Amul should stop its condescending advertising immediately. It has tarnished Amul’s image as an irresponsible company that can use unhealthy ways to beat the competition.

The operational cost for Amul is enormous due to its massive structure. It is a major issue for the problem as its pricing is very volatile and keeps changing with time.

Amul has a huge product portfolio and the company targets a large audience but it is not the same with its production cycle, both the aspects don’t move proportionally. The best example is its chocolate products that have not reached the same level of success as its ice creams.

Amul can invest highly in its chocolate section and generate huge revenue as chocolate is a very common and tempting product. By accurate advertising and marketing, the company can become a significant leader in the chocolate market as well.

Amul can explore its reach in the international markets. It can access more Asian markets from neighboring countries to other regions and operate accordingly. Its international exports will increase its margins and turnover rapidly.

Amul can increase its per capita milk consumption which is generally 97 liters per year, much lower than that of countries like the USA or the EU. The demand for dairy products is continuously growing, and Amul has enough resources to fulfill this demand.

Amul is continuously facing increasing competition in the Ice Cream sector. Many companies and brands both local and foreign are invading its markets and overtaking its sales, reducing its revenue. The major competitors for Amul in the ice-cream market are Kwality Walls, Mother Dairy, Baskin Robbins, London dairy, and Havmor.

Negative media coverage has not been beneficial for Amul’s operations. It has affected the company both externally and internally and is hampering its brand image.

As we all know, Amul has been growing for the past many decades and has always been one step ahead of its competitors. We learned here about the business strategies, marketing strategies, and many other topics of such a huge establishment which helps us understand these companies and how they work, even better.

Amul keeps on increasing its customer base every year by its marketing strategies which are very effective and efficient and are giving Amul the desired results.

All the credit for its success goes to its marketing strategies and its constant attempt at innovation. It also tells us that how important marketing has become in today’s world and the best option in marketing is digital marketing. Digital marketing is taking over the business world.

If you are interested in Digital Marketing and want to pursue your career as a Digital Marketer, IIDE will be happy to help you with its short-term courses which are accessible from anywhere in the world.

If this blog helped you or made you curious that how the companies work, then please leave a comment. You can head on to read the blogs of various other huge establishments and their strategies at the official site of IIDE.