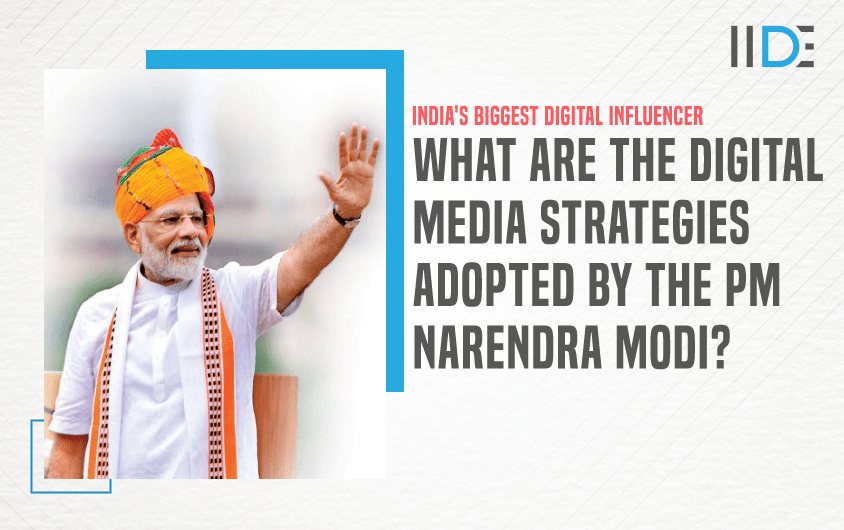 In order to be a Digital Influencer, Narendra Modi knew ‘How to utilize the social media platforms’ which were available for free to his advantage!

When the world thought they were advancing well without Digital, Narendra Modi made the best use of social media platforms.

His rapidly rising fan base exemplifies what brand building entails and how an influencer and leader like him can become the people’s favorite by being available for them, keeping updated with trends, and adjusting technology as needed.

Even the prime minister office social media accounts are one of the most followed accounts held by the office of a world leader.

Also, it is said that PM Narendra Modi’s favorite digital media platform is Twitter because he is most active on it compared to all other platforms.

The Prime Minister’s current team is doing a fantastic job of keeping consistency across numerous accounts and engaging with the audience in a genuine way.

Since his platforms are so well-connected and individualized, it appears that they are all posted by Prime Minister Modi himself.

Unlike the BJP, Narendra Modi wasn’t inactive on social media. Right from his days as Gujarat Chief Minister, he utilized Twitter and YouTube in a true sense to stay connected with his voters. Later on, the Facebook account handle was made official.

Right from YouTube in 2007 to Narendra Modi’s App in recent years, the Prime Minister has been the strongest and the biggest influencer online.

Narendra Modi’s journey towards becoming India’s biggest digital influencer was not easy. To accomplish so, you’ll need to know how to use social media platforms to communicate with your audience successfully.

Bonus: Check out our Online Social Media Marketing Course if you want to become the next biggest digital influencer and learn more about how social media marketing may help you engage with your audience.

The PM’s efforts to connect with Indians all over the world have made him not just one of the most popular Prime Ministers, but also India’s biggest Digital Influencer and a social media star with billions of followers across all social media platforms.

As we all know, the world has been affected by this Pandemic, namely the covid-19 virus, since 2019. And it hit India in March 2020. Everything came to a halt, and everyone was confined to their homes.

And India is also suffering a lot from this Pandemic. However, our Prime Minister, Narendra Modi, has not abdicated his responsibilities.

As the Prime Minister of the nation, he has many responsibilities and obligations towards the citizens and it is his duty to serve the nation, especially during difficult times. And he has done so, very perfectly and flawlessly.

Using digital media, he held a series of meetings with ministers, doctors, and state chief executives to discuss the virus and find a permanent solution.

Modi has always sought to stay in touch with citizens through his social media channels, listening to their issues and attempting to address them.

He even tried to spread positivity by sharing good information and uplifting remarks on social media during this pandemic.

Despite the Covid-19 scenario, numerous states held elections in 2021, and it was also important for Modi and his party to concentrate on elections.

As a result, he conducted Virtual rallies to overcome the problem of social distancing, through the use of digital technology and addressed the people.

This shows that Narendra Modi made optimum use of digital media to continue his work.

Now let’s look at the significant observations we made around the PM’s digital presence over the years.

Would you imagine a Prime Minister of any other country coming live on various media portals to address your nation on New Year’s Eve? That’s where our Prime Minister stands different.

A recorded 2-hour video was live on Facebook wherein he summed up the entire year’s progress. And by doing so, he intends to develop a relationship with the public, a sense of belonging, and what better way to do so than through digital platforms.

Video content bought up by NaMo’s digital media team has been substantial and effective.

Every month end PMO addresses the masses of India and gives them an insight into the monthly progress of the government. It’s a radio-based effort, and the citizens can listen to the podcasts online.  And it’s not a minor initiative to create an app for it and make the podcast available in 19 languages.

PM Modi ensures to keep a channel of communication open between himself and his supporters. This increases people’s faith in him and helps them form a greater bond with the PM. It drops lines of communication. It provides all of the tweeters with a sense of direct communication.

Other ministers joined Modi in using social media to post updates and connect with the public about their activities and schemes. Sushma Swaraj organized rescue attempts for distraught Indian migrants who asked for aid on Twitter while Smriti Irani dealt with controversies.

And he also encouraged a number of other ministers, who began connecting with the audience through various digital media platforms.

4. Quick Action: Gift to a lady who tweeted for Shawl of Narendra Modi

Narendra Modi perfectly knows how to make the citizens happy. Once Narendra Modi wore a shawl in an event, a lady tweeted for a shawl. The next day the shawl was delivered to the lady’s residence with an autograph on the lady’s tweet.

This demonstrates how quickly he responds to everything, as well as how he and his team make an effort to read all of the comments on their various social media platforms.

“The Opinion Matters”. Narendra Modi’s digital strategies are far more advanced and well-thought-out than any other global politician.  It was critical to understand the public’s opinion on demonetization once it took place.

Guess what? People downloaded Narendra Modi’s app just to put a yes and 90% of the population were in favor of the Prime Minister.

PMO is an expert at executing successful campaigns. His digital media presence prior to elections has been substantially successful due to 3 word(mostly) campaigns. Swachh Bharat Mission, Make in India, Beti Bachao-Beti Padhao, Skill Development India, and AAYUSH are just a few examples. Narendra Modi’s election campaign has a long-term impact.

The PMO’s social media team makes extensive use of creative visuals and infographics.

With just one email every day, Team Narendra Modi reaches out to 20 crore people per day. Prime Minister’s mail is received by every individual registered on their subscription list. Citizens of India receive updates from the Prime Minister on a variety of topics, including personal, economic, professional, and political matters.

If you want to learn more about how email marketing works, have a look at our Online Email Marketing Course.

Twitter is undoubtedly one of Narendra Modi’s most popular engagement sites, where he spends most of his time interacting with people in order to preserve his relationship with the public.

Twitter had also played an important role in the personal branding of PM Narendra Modi.

Narendra Modi is ranked #12 on the list of the world’s most-followed Twitter accounts,  and when it comes to the most followed leaders, he stands out in the second position after the former US President Barack Obama.

Below given are some of the digital media strategies during elections.

If you managed to read this blog article on India’s biggest digital influence: PM Modi until here, you’ve probably already realized how valuable the ideation, techniques & strategies are that led him to this level of digital & overall success!

No one can doubt the brainchild of Narendra Modi. How he utilized these platforms to ensure his seat as a PMO and is utilizing it to be in the minds of the masses.

Our Gift To You!

Since we teach digital, our team decided to do a case study on PM Modi’s Digital Success. It is in the form of an ebook we’d love for you to read.

A sneak peek for you, it contains:

So we’re excited for you to read this because once you’re done reading it, you’ll have a whole new idea & experience on digital! Hope you are able to make the most out of it & look forward to getting your feedback!

And we have another FREEBIE just for you! Here’s your chance to register for Karan Shah’s Free Masterclass on Digital Marketing Basics & Secrets. All you need to spare is 45 minutes!

Did this information intrigue you? Are you also trying to mark your presence in the digital world and wish to ace this game? Enroll for this 11-month MBA-Level Postgraduation in Digital Marketing and get started with managing your own digital marketing needs or bag high-paying job offers at the mid-senior managerial level.

And if you’re solely interested in learning about certain digital marketing skills, you can enroll in one of our short-term certification courses, which can help you gain an in-depth understanding of that skill.

We hope you found this blog to be informative and entertaining. Please share your thoughts in the comments section below. We’d be delighted to hear from you.