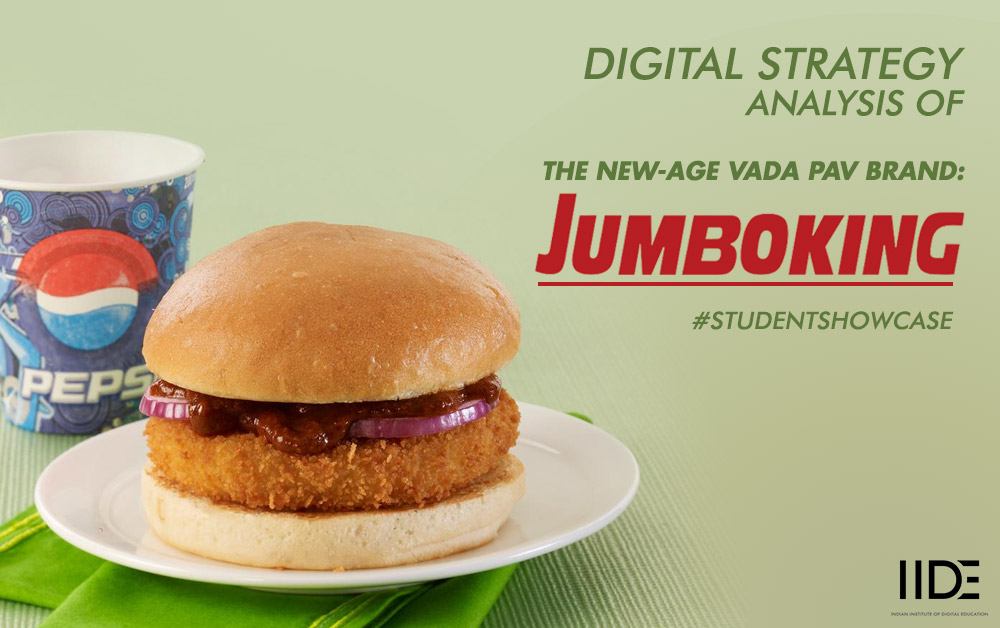 Ever walked past a bright red and yellow signboard at a metro station, likely above a store that smells like something good cooking? Then you’ve probably already encountered Jumboking, my friend. Capitalising on public areas like metro stations, Jumboking has been catering to the masses by selling low-priced burgers, vada pavs, soft drinks and other travel-friendly snacks for years now. And the public have been loving it! A hygienic solution to when you wake up in the morning and don’t have time to eat breakfast, staying at work late, and too tired to cook dinner at home, Jumboking has made its way into the hearts of commuters—corporate employees, students and entrepreneurs alike.

But how did they do it? And more importantly, can they grow further than this? One of IIDE‘s student, Owais Chasmawallah, answers these essential questions in his digital marketing report of the company that we’ve included down below. Read on to find out more about Jumboking Digital Marketing Strategy!

With its very first outlet opening outside Malad railway station in Mumbai in August 2001, Jumboking is nothing if not a testament to the perseverance and success of its owner and founder, Dheeraj Gupta.

At the age of 25 and with two business degrees in his pocket, he set out with the goal of establishing a sweets business that made mithai as accessible and resaleable as chocolate. He borrowed money from his father and brother (already running a successful sweetshop) to give a jumpstart to his idea. However, within a mere five months, his first business plummeted.

But Gupta did not wallow in his loss. Instead, he picked himself back up and built Jumboking from scratch. Learning from the mistakes he made the first time around, this venture was infinitely more successful than the last, and eventually earned Gupta profits which would libertae him from his debt.

His first outlet was called Chaat Factory (Snack Factory) and sold the humble vada pav for a mere Rs. 5. Gupta had observed the Burger King business model on a visit to London and had decided that it would work very well in India, which is what he was trying to emulate at first. Compared with other vada pav sellers across the city, Jumboking’s vada pavs were produced in hygienic and safe conditions, which set them apart from all other possible competition in the same price range.

Now, Jumboking serves numerous variations of the vada pav. It has grown to own more than 300 outlets in the country , with 30 outlets in Mumbai alone. Truly, Jumboking has risen above its humble beginnings. But can it grow further? Let’s see what our student has to say on the matter. Lets check out their Jumboking Digital Marketing Strategy!

One of the key factors towards the success of any business these days, especially those in the food industry, is, of course social media. And after 17 years in the industry, Jumboking has certainly learned this.

In order to truly make their presence online, Jumboking has adopted a few strategies, like making use of certain campaigns like #OnTheGoSnacking, in which the brand has posted creatives of things you can do while eating a vada pav. For example, an edit of two people doing garba while one eats a Jumboking vada pav.

At the same time, #VadaPavDay was a campaign that Jumboking used before their self-proclaimed Vada Pav Day—celebrated on the date of their anniversary (23rd August) which intended to get people to eat vada pavs from Jumboking on that day, as well as to create brand awareness and brand recall.

Another interesting campaign was regarding #ChotiBhok in which Jumboking spread awareness about vada pavs serving the purpose of a small snack between meals.

A few strategies that Jumboking could further follow in order to fully grow their social media to its potential could be #JumboChampionship, which would involve a vada pav eating contest at malls in Mumbai and Pune. A couple of malls where this suggested contest could take place could be High Street Pheonix in Mumbai and Pheonix Marketcity in Pune. The registration form should be online so that people may be encouraged to check out Jumboking’s website and social media before registering. The prize for this contest could be gift vouchers or a Jumboking offer booklet. There would be two separate competitions, one for males and one for females.

#MeraWalaVada is another clever campaign Jumboking could use to increase brand awareness, would be to ask people to share recipes of their favourite vada pavs online on the brand’s website. A deadline would be announced and after the deadline 30 best recipes would be selected. These recipes would then be published in a booklet which would be available for purchase at all Jumboking outlets. A copy of this booklet, along with Jumboking vouchers, would be delivered to each of the 30 chosen cooks. The best recipe out of these 30 would then become the new Jumboking launch. This campaign not only increases Jumboking’s interaction with their followers but also helps them find a delicious new addition to their menu! This Jumboking Digital Marketing Strategy was found to be very successful.

Burger King uses several campaigns to maintain their social media pages, one of which is #HatersGonnaLove in which they retweet year-old tweets that gave feedback for the Burger King Crispy Chicken Burger that was … let’s just say, less than glowing. The brand then gave the tweeters a free and updated Crispy Chicken Burger, stating that it was now ‘dressed to impress’. This campaign ran only across Twitter in the month of March 2017.

Goli, too, uses several clever strategies in order to up their social media following, like #GoliAwesomeness, a hashtag used to create hype for their vada pavs. This ran across all social media platforms on which Goli had a presence and involved showcasing an item from their menu with the help of a creative and encouraging customers to buy it.

There is no doubt about the fact that Jumboking needs to improve their social media game in comparison to Burger King, its international competitor. However, with Goli on the home turf, it quite obviously has a superior digital presence.

Jumboking tries to cater to audiences of all genders who are from a middle-class background and are between the ages of 15 to 35. Their customers are students and working professionals who often commute or take the trains and metros. They belong to fast moving, urban cities.

Some of the most popular keywords for Jumboking are jumboking, jumboking menu and jumboking vada pav price. This means that whenever someone searches for these terms online, Jumboking’s results are the first that pop up.

Often, brands bid on certain search terms to ensure that when users search these particular terms on the internet, the particular brand’s page pops up as one of the first results. This may be useful for Jumboking in reference to other words that it could really capitalise on if they were able to be one of the top results.

Some of the suggested bid words for Jumboking are vada pav, vada pav in mumbai and on the go snacks. This ensures that when someone searches for the said terms online, they are bound to encounter Jumboking’s website as one of the first results. This makes the website more accessible to the people looking for joints that serve vada pav near them, which is ultimately the group of people Jumboking wants most to reach out to. Developing an SEO Strategy has surely benefited Jumboking Digital Marketing Strategy

Jeb pe sasta, dil pe hasta—why Jumboking is Mumbaikars’ favourite choice and Are you a hygiene freak? Jumboking is the right place for you! are examples of articles that the brand could create to ensure that website visitors spend more time with Jumboking online!

An example of listicles that Jumboking could post on their blog could be 5 experiences that make you a Mumbaikar and Great Indian delicacies. Listicles are extremely entertaining and captivate the reader’s attention, and at the same time subtly encourage the reader to visit Jumboking. In this case, the readers might want to eat vada pavs at Jumboking just for a chance to see what all the hype is about!

Jumboking could conduct influencer campaigns in which it approaches influencers to attend Jumboking’s event, review Jumboking on Zomato and write a post about the Jumboking vada pav of the day. For example, thehungrymumbaikar on Instagram (70k follwers), thebigbhukkad on Instagram (25k followers) or Mumbai Foodie (240k followers on Instagram).

A few online platforms that could be of use to Jumboking’s ORM could be Zomato, Burrp, Quora and Mouthshut. These online reputation management platforms help the customers share their reviews of Jumboking’s food and therefore spread the word!

Platforms like Quora and Yahoo Answers often include questions like ‘Where can I get the best vada pav in Mumbai?’ and other similar queries. It has to be made sure that Jumboking is mentioned in such answers! This increases the likelihood that, when someone searches stumbles across such questions, they have a positive impression of Jumboking.