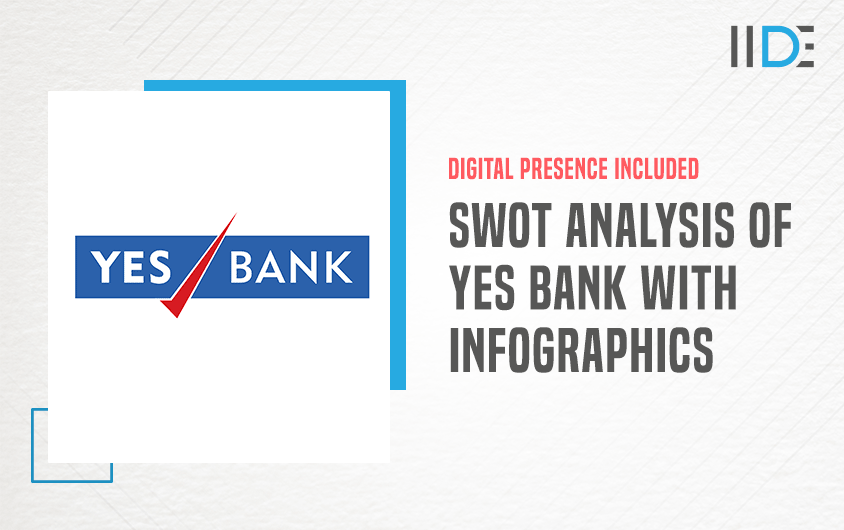 In our previous blog, we elaborated on the SWOT analysis of one of the toughest contenders in the private banking sector, HDFC. In this blog will be doing an end-to-end SWOT Analysis of Yes Bank.

Yes Bank has made a jump in its profits of about 74% which was more than the estimated profit during the Q2 of 2021. In the past decade, it has shown its success by winning a variety of awards. Due to its abundant knowledge in the banking sector, it has been providing its customers with different facilities and giving quality services.

They have been using some innovative marketing strategies in this digital era. Digital marketing is one of the most essential methods of marketing for the current time as most people are online and it can cater to a large audience. So if you are interested in learning the latest skills – check out our Free MasterClass on Digital Marketing 101 by the CEO and Founder of IIDE, Karan Shah.

This makes us curious to know how Yes Bank became such a big name in the industry, here we have covered the topic SWOT analysis of Yes Bank in depth. But before we understand its success strategy let us know a bit about Yes Bank as a company, its services, competitors, financial health, and more.

Yes bank was established in the year 2004 by Rana Kapoor and Ashok Kapur. It has its headquarters in Mumbai, India, and has been providing its services all over the country and 9 union territories with a large workforce under it.

It has been acknowledged as one of the fastest-growing banks in various national rankings by renowned news outlets and global advisory firms. Yes Bank was one of the top 10 banks in India as of market capitalization in 2018. It has also earned several regional and global honors for its businesses that including Corporate Investment Banking, Treasury, Transaction Banking, and Sustainability.

The Reserve Bank of India seized control of the bank on March 5, 2020, in an attempt to prevent its collapse due to the heavy accumulation of bad loans. Since then, the board has been restructured as the former Chief Financial Officer of SBI was assigned as the new MD and CEO at Yes Bank.

Through an extensive branch banking network of over 1000 branches and 1,800 ATMs. A wide array of services are offered such as:

Due to its large presence in the market have many competitors all over the country, some of which are:

Now that we know about the company. Let us now start with the structured SWOT analysis of Yes Bank. SWOT analysis refers to the study of the Strengths, Weaknesses, Opportunities, and Threats which a company possesses. This helps the company to know its position in the market and what needs to be improved and what it needs to be prepared for.

SWOT Analysis of Yes Bank can be evaluated through the following points:

Strengths include the potential capabilities and available resources that a firm can utilize for its growth. The following are the strengths of Yes Bank:

Weaknesses are those elements that impede the company’s growth and prevent it from reaching its objectives. Yes bank has a few deficiencies that must be addressed

Opportunities are favorable conditions that offer a company a competitive edge over rival enterprises. Following are the favorable opportunities for Yes Bank:

External elements that might affect the firm are referred to as threats. These issues should be addressed as quickly as possible to prevent severe harm to the organization. The threats to Yes Bank are as follows:

With this, we have completed the SWOT Analysis of Yes Bank, let us conclude the case study.

Yes Bank has been growing exponentially with a jump in profit of about 74%. As we have studied the SWOT Analysis of Yes Bank we have known that it has a rising net cash flow and cash from operating activity with a diversified business and has a good opportunity in the global market. However, some of the factors are potential drawbacks for the company.

With changing market conditions there is an increase in competition in the market and its returns in assets are negative. It can tackle this problem by entering the global market and by the use of digital marketing it can create a large customer base as in modern times most people are active on digital platforms. If you are interested in learning more and upskilling, check out IIDE’s 3 Month Advanced Online Digital Marketing Course to know more.

If you like such detailed analysis of companies, find more such insightful case studies on our IIDE Knowledge portal.