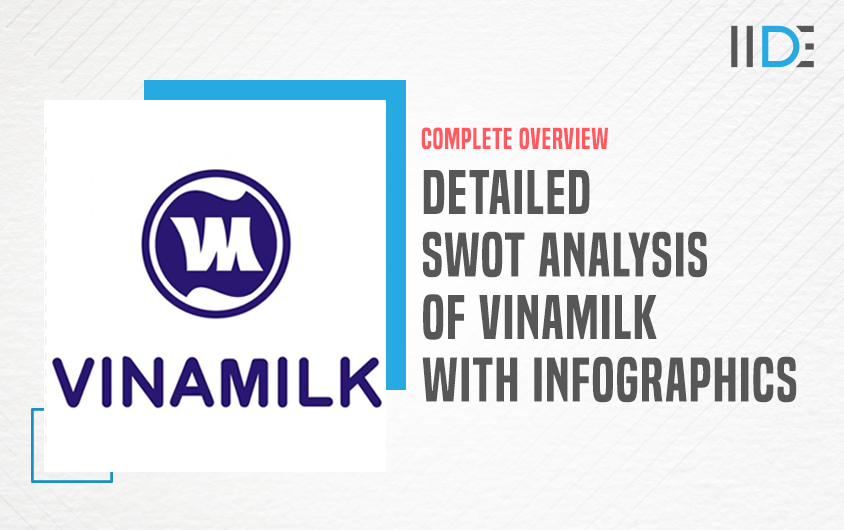 It is the 3rd most valued brand in Vietnam in Forbes list of 50 most valuable brands in Vietnam with a brand value of US$2.1 billion. Vinamilk is listed as the largest dairy company in Vietnam. With over 40 years of experience in the industry, it provides its customers with some of the finest quality products in the market. It caters to international markets like the United States, France, Canada, Poland, Germany, the Middle East, and Southeast Asia.

To market to such a large audience it uses one of the most popular marketing methods which is digital marketing, helping them advertise to customers in different countries. So if you are interested in learning the latest skills in digital marketing – check out our Free MasterClass on Digital Marketing 101 by the CEO and Founder of IIDE, Karan Shah.

Thus this makes us keen to know how Vinamilk has grown exponentially in its field, we have done an in-depth study on the topic SWOT Analysis of Vinamilk. But before we dive into its SWOT Analysis let us first know about Vinamilk as a company, its products, competitors, financials, and more.

Vinamilk stands for Vietnam Dairy Products JSC. It was the first company to be included in Forbes Asia’s 200 Best Under A Billion list from Vietnam. It was established in 1976 which is a joint-stock company and most of its shares are with Vietnam’s State Capital Investment Corporation (SCIC) which is 36% of the total shares.

Vinamilk comes under the food processing industry, specifically, the dairy industry. It manufactures, markets, wholesale trades, and retail distributes dairy products, such as milk of various forms and flavours, including fluid milk, powdered milk, and sweetened condensed milk, along with yoghurt, ice cream, frozen yoghurt, cheese, and infant nutrition flour. Some of its other products are soya milk, rice milk, bottled coffee, sugar, bottled juice, and other non-alcoholic beverages.

Vinamilk also exports several milk-based products to the Middle East, Cambodia, the Philippines, and Austria. It holds a market share of about 47% in the Vietnam dairy industry. It earned a total revenue of VNĐ 59.6 Trillion in 2020. It has a market capitalization of VNĐ 188 Trillion.

Vinamilk is the largest dairy brand in Vietnam. It provides its customers with a wide range of products with diverse choices. Some of Vinamilk’s products are listed below:

Vinamilk has its branches in different countries thus this increases the competition for Vinamilk. Following are some of Vinamilk’s competitors:

Now that we know about the company let us start with the SWOT Analysis of Vinamilk.

SWOT analysis is the study of a companies Strengths, Weaknesses, Opportunities, and Threats in the industry. This helps the company to know where it stands in the market and analyze its strategies.

Let us know about its SWOT Analysis of Vinamilk, starting with its strengths. 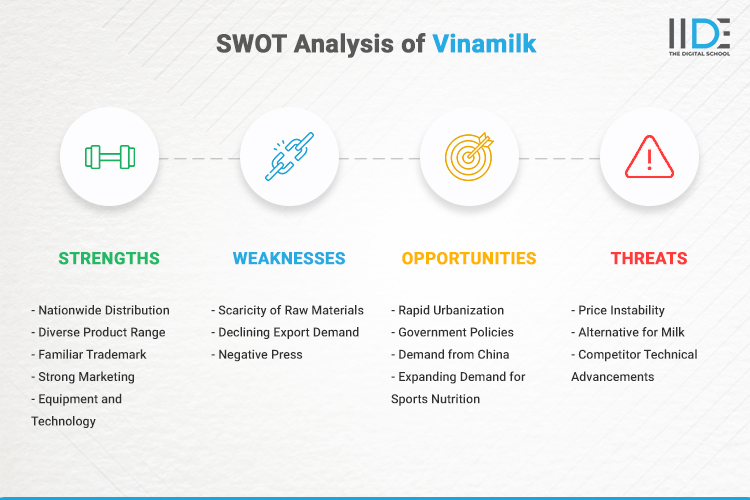 Strengths are the positive point of a company that keeps it ahead of the competition. Following are Vinamilk’s Strengths:

Weaknesses are the internal factors of a company that creates a drawback in the growth of the company. These problems need to be addressed before it becomes more troublesome. Following are the Weaknesses of Vinamilk:

Opportunities are the positive factors for a company. This helps the company to grow in the market and create more customers for its brand. Following are some of the Opportunities for Vinamilk:

Threats are the potential risks that Vinamilk can face in the future. It needs to be aware of such threats and be prepared with proper solutions to tackle such situations. Following are some threats for Vinamilk:

With this, we have come to an end of the SWOT analysis of Vinamilk. These studies help the company plan strategically and grow its business in all possible ways.

We can conclude that Vinamilk is one of the most valued brands in Vietnam. It has a strong nationwide distribution channel and a strong marketing plan as well as it has opportunities from government policies and the increase in demand from China. Even though it has such a good market hold there are some flaws. There are rumours surrounding Vinamilk products by competitors and the increase in competition from global players in its home country is reducing its market share.

These factors can be tackled by the use of better digital marketing knowledge by improving its brand image and improving its brand reputation as most of the people are on digital platforms it is easy to connect with them. If you are interested in learning more and upskilling, check out IIDE’s 3 Month Advanced Online Digital Marketing Course to know more.

If you would like to know such detailed analysis of companies, find more such insightful case studies on our IIDE Knowledge portal.

Thank you for taking the time to read this blog, and do share your thoughts on this case study in the comments section below.