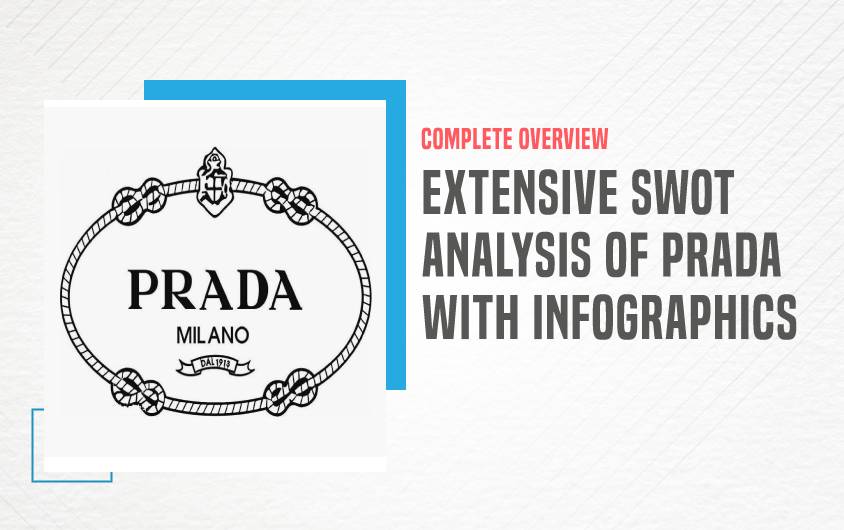 Since its founding, Prada, the renowned Italian luxury fashion business, has dominated the luxury bag industry. They are noted for their innovative designs, which make it a trailblazer. Prada has also reintroduced a number of classic styles to the mainstream. They are now one of the most fashionable and internationally recognised names in the luxury and apparel industries.

Prada has undertaken excellent marketing efforts, but they are falling behind in the fight to reach the digital world. Marketing evolves with time, according to the demands and preferences of the present population. The bulk of effective campaigns have now migrated to digital media. If you want to learn more about today’s effective marketing, check out our Free MasterClass on Digital Marketing 101 taught by Karan Shah, CEO and Founder of IIDE.

Interested to dive into the key to Prada’s success in the luxury fashion industry? In this case study, we will learn about the SWOT Analysis of Prada. Before we begin, let us learn more about Prada, its founding, products, financial status and competitors.

Prada is a fashionable attire and accessories business, established during the early 1900s and is headquartered in Milano, Italy. It’s a luxury fashion brand that focuses on several luxury merchandises ranging from travel accessories to shoes, watches, and so on. Prada manages and owns a few of the most prestigious brands – Miu Miu, Church’s, Cas Shoe, and Pasticceria Marchesi.

Mario Prada and his brother Martino started Prada as a leather goods store called Fratelli Prada, which translates to “Prada Brothers” in Italian. Animal goods, purses, and steamer trunks were among the items marketed by Fratelli Prada. The majority of these things were brought in from England.

Prada’s development in the fashion business continued throughout the 1990s, and by that time, it had established itself as one of the world’s top fashion houses. Prada made the purposeful decision to have some exclusivity to the brand, thus certain of their things were produced in restricted quantities. They expanded their business from luxury bags to a plethora of fashion items.

A company that started solely with leather products, widened their product scope over the years. Following are merchandises by Prada –

Prada holds their reputation under the top luxury fashion brands. However, they are in constant competition with –

Now that we have insight into the background of Prada, let’s delve deep into the company’s operation via the SWOT Analysis of Prada. 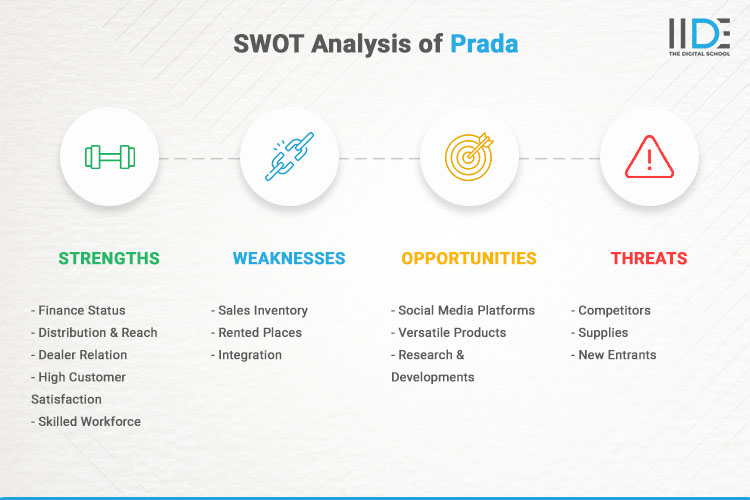 What distinguishes Prada from other fashion firms is its minimalist but elegant designs, which are free of flashy brand marks. The following are Prada’s intrinsic strengths that have led to their consistent success –

Next under the segment of the SWOT Analysis of Prada are the Weaknesses. The factors that pull the brand down are its flaws. Early detection of flaws would assist the brand in promptly resolving the issue before it becomes a disaster. Let’s take a look at Prada’s weaknesses –

Last under the SWOT Analysis of Prada are the Threats. Because prevention is better than cure, what better way to protect the brand’s reputation than to be aware of external threats? Prada should concentrate on the following elements to avoid further damage –

For large brands like Prada, a SWOT Analysis is an ideal technique to break down their operations and analyse management risks and benefits. With this, we come to the end of this case study on the SWOT Analysis of Prada.

Prada’s position as a top luxury fashion brand has been solidified by its strong financial situation, steady relationships with external dealers, consumer satisfaction, and, most crucially, its global reach. Clearly, Prada faces risks as a result of the industry’s significant rivalry and appeal. Working on their sales inventory, focusing on feasible research and development, and tapping into the digital world of marketing would assist them to secure their renowned position and increasing sales.

Prada will not only gain from the cost-effectiveness of digital marketing when they boost their presence through different channels like SEO, emailing, content marketing, and social media marketing, but they will also reach a larger audience than normal.

Obtaining the necessary skills in Digital Marketing and completing Certified Courses may lead to opportunities to work with fashion houses like Prada.

IIDE provides training in a variety of digital skills and knowledge, including Short Term Certification Courses that can bring you up to speed in as little as five days. Check out IIDE’s short-term certification courses, which include topics like social media marketing, media planning, and SEO.

Thank you for taking the time to read this SWOT Analysis of Prada, do comment below with your opinions on the case study.