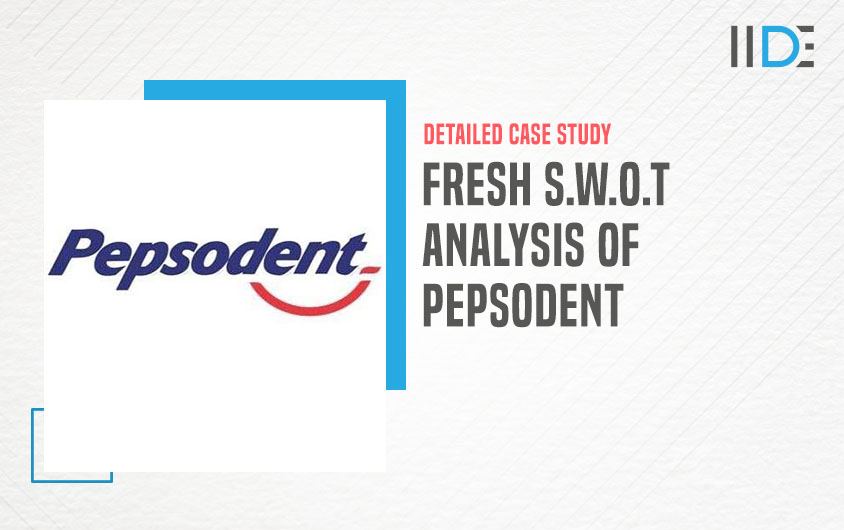 Pepsodent is a well-known oral care products corporation with a presence in over 50 countries under the brands Pepsodent, Mentadent, PS, Signal, and Zhonghua in select areas.

Pepsodent has been endorsed by the FDI, the world’s largest dental association, giving it an enormous reputation. Pepsodent is a Unilever product except in the United States and Canada, where it is owned by Church & Dwight.

We should understand the SWOT analysis of Pepsodent to better understand the reasons for its continuous growth, which is required for any business to survive and thrive in the market.

In this case study, we will learn about the SWOT Analysis of Pepsodent and about the company So, let’s get right into it.

Pepsodent was first introduced in India in 1993, and the brand has since set the standard for Oral Care solutions in the country. It offers a variety of toothpaste and toothbrushes to meet various oral care requirements.

It is a predominating oral care brand with a diverse product portfolio, owing to Unilever’s long history of R&D in this field.

Now that we’ve covered the company’s fundamentals, let’s look at the SWOT Analysis of Pepsodent in the section below.

It’s an excellent tool for determining where the firm thrives and where it falters, designing countermeasures, and determining how the organization may expand. So, in the part below, we’ll look at the SWOT Analysis of Pepsodent.

Strengths are an organization’s distinguishing qualities that provide it with a competitive advantage in acquiring more market share, attracting more customers, and maximizing profitability. Some of Pepsodent strengths are as follows:

Pepsodent is available in over 50 countries thanks to Unilever’s extensive distribution network. A strong global presence mitigates the business risks of being overly reliant on a single market.

Unilever’s collaboration with FDI allows it to be supported and endorsed by FDI as well as various National Dental Associations around the world, making it a credible product.

Pepsodent offers a diverse range of oral care products such as toothpaste, mouthwash, and toothbrushes. It has offerings that address specific issues such as gum bleeding and sensitive teeth, among others.

Pepsodent has a very strong marketing team that has ensured that the trust of FDI is communicated through its integrated marketing communications (TV Ads, etc.). This contributes to the market’s growing demand.

A company’s or brand’s weaknesses are elements that need to be improved. So let’s take a look at some of Pepsodent weaknesses:

There is an increase in demand for herbal products not only in India but around the world. Pepsodent lacks many herbal products, which is its weakness.

Colgate, as the most popular oral care brand in the world, has given competitors a limited market share due to the brand’s popularity.

Opportunities are places where a company might concentrate its efforts in order to enhance results, sales, and, eventually, profit. So, let’s have a look at what type of opportunities Pepsodent has to produce outstanding achievements.

In order to generate buzz about the brand, Pepsodent should look for an innovative approach to marketing the product. In this category, the innovative packaging also draws the consumer’s attention.

As people’s lifestyles improve, particularly in developing countries, there is a greater awareness of the importance of oral health, creating an opportunity for Pepsodent to capitalize on the potential demand.

Threats are environmental factors that can inhibit a company’s expansion. The following are some of Pepsodent’s threats:

In India, Patanjali has made a significant incision in the oral care market, affecting all popular brands, including Pepsodent. This has disrupted market dynamics, and as a result, there is an increasing threat of new entrants in other markets as well.

In many countries, Pepsodent competes directly with another popular Unilever brand, Close up. This increases product cannibalization and, as a result, affects sales of both brands.

There is a lack of oral care awareness in rural areas of countries such as India and Pakistan, among others. This acts as a deterrent to growth in rural areas for brands such as Pepsodent.

Now that we’ve gone over Pepsodent’s SWOT Analysis in-depth, let’s wrap up the case study in the section below.

Pepsodent is a well-known oral care organization with a presence in more than 50 countries under the brand names Pepsodent as well as Mentadent, PS, Signal, and Zhonghua in certain parts of the world. It has the highest demand of all of its competitors, yet its sales are second only to Colgate. It will eventually grow in the toothpaste market in the next few years, although at a slow and steady pace.

The SWOT analysis performed by the company aided in the formulation of key recommendations, such as establishing a new vision and strategy and adhering to current performance indicators.

Please share your thoughts on this case study in the comments section below. Thank you for taking the time to read this, and if you found it interesting and wish to step foot into digital marketing. Check out IIDE’s Digital Marketing Free Masterclass.