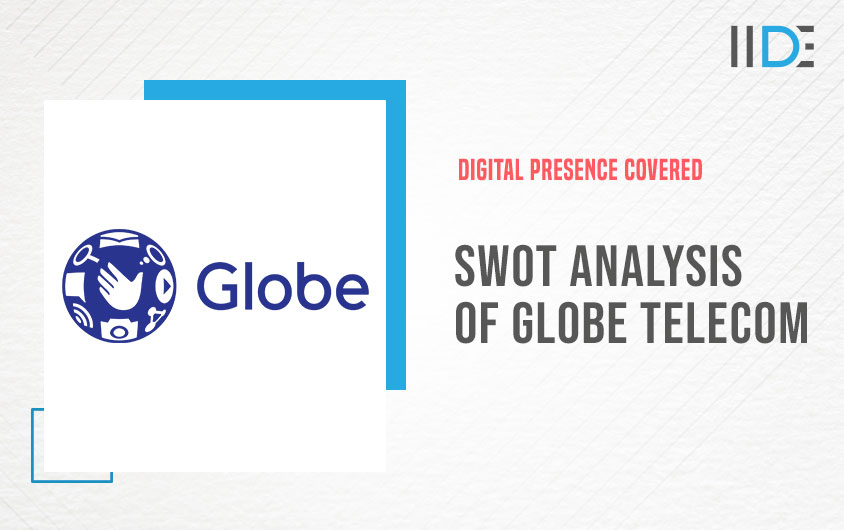 Last time we took a deep dive into the SWOT analysis of Airtel, one of India’s largest telecoms. Now we turn our attention to the Philippines and will conduct a SWOT analysis of Globe Telecom.

Globe Telecom Inc, commonly known as Globe, is the leading telecommunication giant in the Philippines. In this digital day, where there are so many rivals and so many services to offer, being the main telecommunication service provider in a country is a hard task, and maintaining its position as a market leader is even harder.

For market leaders like Globe Telecom, having a strong online presence is a must to be able to maintain its market leader position. Digital marketing has become more relevant than ever since businesses need to have an online business to stay in the game. If you are interested in knowing the latest marketing techniques as well, you should definitely check out IIDE’s Free MasterClass on Digital Marketing 101 by our CEO and Founder, Karan Shah.

To learn more about how the company has stayed in the leading position, we are going to do a SWOT Analysis of Globe Telecom – exploring its strengths, weaknesses, opportunities, and threats in detail.

So before we begin our deep dive, let us start by learning more about the company – its history, services, financial position and competitors.

Ernest Cu, the CEO of Globe Telecom, was named CEO of the Year at the World Communication Awards 2017. In the following year, Globe was announced as the best workplace in Asia. The major offerings of the corporation include providing commercial wireless services through its 3G, 4G LTE (Long Term Evolution), and LTE-A (Long Term Evolution-Advanced) networks. It has also started to deploy its 5G service offerings in some key areas in the Philippines.

Apart from this, in 2016 the organization also launched the Globe Lifestyle brand where the main focus was to expand the company in the fashion sector which would, in turn, help the firm’s lifestyle brand connect with the customers via fashion. It also ventured into the entertainment industry with 2 divisions namely Globe Studios which focuses on film and television production and Globe Live which focused on music events and live concerts.

The Telecom industry is oligarchic, i.e., it has few but very intense competitors, Globe’s competitors are:

Now we got a basic understanding of the company, Globe Telecom. Let’s quickly begin the exploration of the SWOT analysis of the company.

SWOT stands for Strengths, Weaknesses, Opportunities, Threats. It is used as a tool to know and analyze the market position and general health of a business. It is extremely useful and is done by every old as well as a new business to determine the most effective future path.

So without any further ado, let us start the discussion of each segment in the SWOT analysis of Globe Telecom in the coming section:

Some of the major advantages that Globe has over others are :

These are Globe Telecom’s strengths and benefits in dealing with competitors in many industries. Let’s take a look at the weaknesses of the company below.

The areas where Globe Telecom lacks are as follows:

This concludes the weaknesses of Globe Telecom. These flaws are the most important areas where Globe should concentrate its efforts. Now that we know about the weaknesses of the company, let’s focus on its opportunities.

The opportunities that Globe Telecom should focus on include:

These are the possibilities for the telecom company to improve its position in the market. In the next section, we’ll take a quick look at the company’s threats.

The threats that Globe Telecom faces are :

This was the in-detail SWOT analysis of Globe Telecom, now let us conclude our learnings in the section below.

Globe Telecom, the leading telecommunication service provider does have some flaws and risks in its business. By using its might and prospects, the company can achieve its success no matter what. The organization can reach its target audience as it is expanding its business. With innovative products and services, Globe Telecom can create a positive atmosphere around the company to maintain its position in the market.

Gaining a professional understanding of digital marketing is essential for working in the marketing sphere of highly competitive industries such as telecommunications. If marketing is something that interests you, you should definitely check out the Post Graduation Programme in Digital Marketing offered by IIDE that will help you transform into the managerial candidate in the marketing department of companies.