BP, formerly known as British Petroleum, is a global leader in the oil and gas industry. They are also involved in the refining, marketing, and supply of petroleum products, as well as in the production and marketing of chemicals, gas and power generation, and the production of photovoltaic (solar) cells.

BP’s marketing game has helped them to tap into new areas throughout the world. Marketing develops in response to current consumer trends and interests.  If you want to learn more about today’s effective marketing, attend our Free MasterClass on Digital Marketing 101, led by Karan Shah, CEO and Founder of IIDE.

Before we delve into the SWOT Analysis of BP, let’s have a look at the company, its history, financial situation, products, and competitors.

The British Petroleum Firm plc (commonly known as BP Amoco plc) is a United Kingdom-based international oil and gas company. In the oil and gas business, it is one of the world’s seven “supermajors.” It is a vertically integrated corporation that engages in exploration and production, refining, distribution and marketing, power generation, and trading across the whole oil and gas industry.

BP is also a barometer firm for the United Kingdom’s economy, and the corporation’s ups and downs have a significant impact on the region’s economy. BP is the world’s third-largest oil and gas company, as well as the leading gasoline retailer in the United States.

The company operates approximately 18,700 service stations worldwide. BP holds 19.75 per cent of Rosneft in Russia, the world’s largest publicly listed oil and gas corporation by hydrocarbon reserves and production. The Anglo-Persian Oil Company was established in 1908 as the predecessor to BP. In 1935, it was renamed Anglo-Iranian Oil Company, and in 1954, it was renamed British Petroleum.

Following are the products sold by BP –

Below are the top 5 competitors of BP –

Now that we are familiarised with BP’s operations and finance, lets dive into the SWOT Analysis of BP. 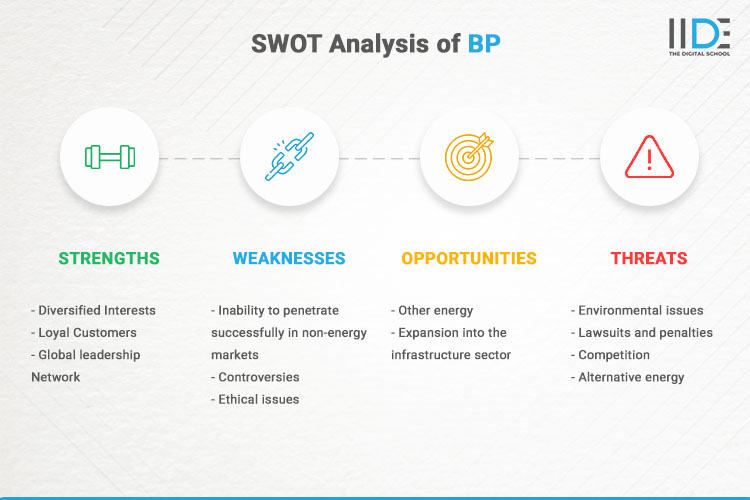 Strengths are described as what a company excels in its many operations, giving it a competitive advantage. The following are BP’s advantages:

Weaknesses are aspects of a company or brand that can be improved.

The term opportunity refers to pathways in the business’s environment that it can use to boost its profits. Among the possibilities are:

Environmental components that have the potential to limit a company’s growth are known as threats.

With this, we come to the end of the SWOT Analysis of BP. In the following section, let’s briefly conclude the case study.

BP has positioned itself as a global leader n the market with the inter in diversified areas and technology, a loyal customer base and a strong network. However, like every company, they do have a few prominent shortcomings. Working on reducing their controversies and ethical issues with clear its slightly tainted image.

For businesses all around the world, having a digital presence has become the most critical part. This demands a working understanding of digital marketing. By giving you a thorough grasp of the strategies and functions of Digital Marketing, completing certified courses may give you the opportunity to work with well-known companies such as BP.

IIDE provides training in a variety of digital skills and knowledge, including Short-term certification courses, which include topics like social media marketing, media planning, and SEO, in as little as five days.

Thank you for taking the time to read this case study on the SWOT Analysis of BP. Don’t forget to add your thoughts in the comments box below.