Researched SWOT Analysis of Barclays – One Of UK’s Largest Banks 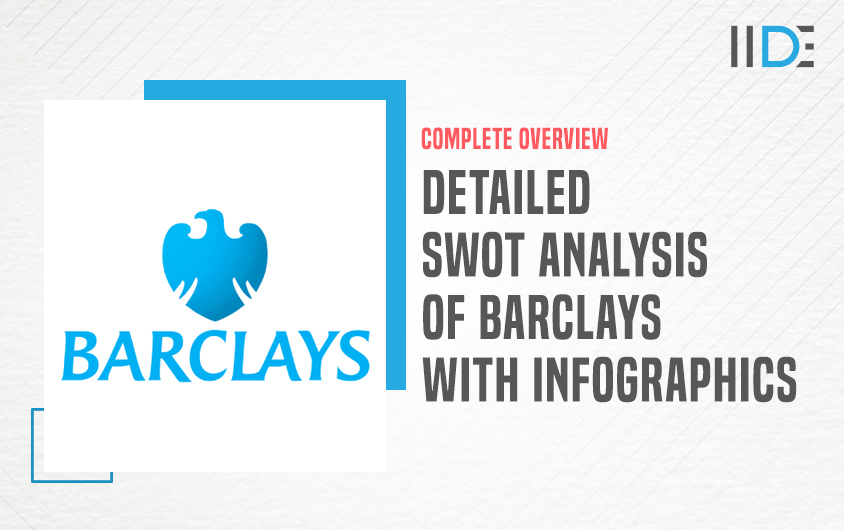 In our last blog, we did an end-to-end SWOT analysis of one of the strongest contenders in the private banking sector, HDFC. In this blog will be doing a detailed SWOT Analysis of Barclays.

In this growing digital era, one of the most crucial parts is to make a good digital presence on which Barclays has done a good effort. But still, there are some places where it can improve on. With the use of advanced digital marketing skills, it can fix these flaws. Having knowledge of digital marketing is one of the most helpful tools for businesses nowadays. If you want to know what is digital marketing and how to use it to your advantage  – check out our Free MasterClass on Digital Marketing 101 by the CEO and Founder of IIDE, Karan Shah.

Thus this makes us anxious to know how Barclays grew its success in the industry. In this blog, we have done an elaborated SWOT Analysis of Barclays. But before we start with its SWOT Analysis let us first know about Barclays as a company, its services, competitors, financials, and more. 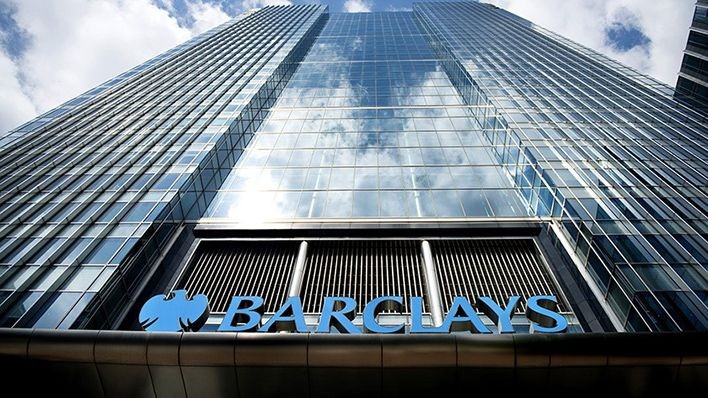 A British multinational universal bank established in 1690 which has a worldwide high reputation – Barclays has its headquarter in London and is known for all its firsts to credit, machines, funding from more than 300 years of history whether it’s the funding for the world’s first industrial steam railway in 1819, to introducing the world’s first automated teller machine in 1967.

Barclays with more than 325 years of history and aptitude in banking, works in more than 40 nations and utilizes roughly 83,500 individuals.

Barclay is one of the largest companies in the Uk and over the world. It provides its customers with different services to keep them satisfied. Following are some of Barclays services:

Barclays provides its services all over the world. Thus this brings a large amount of competition for it. Below are some of the top competitors for Barclays:

Now that we got an idea about the company let us start with the elaborated SWOT Analysis of Barclays. 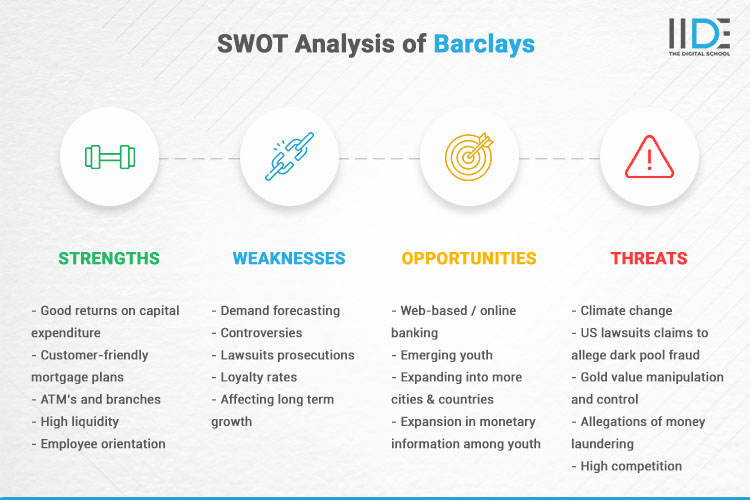 The main purpose of SWOT analysis is to identify the strategies that can be used to build on & protect Barclay’s strengths and eradicate its weaknesses both of which are the internal factors of the company whereas to exploit its external factors such as its opportunities and counter market threats.

Let us understand its SWOT analysis by starting with the Strengths of Barclays.

Strengths are the positive factors of Barclays. These help it stay above other competitors. Following are some of the Strengths of Barclays:

The weaknesses are the regions where Barclays can improve. These are the factors that affect a companies growth. It should be aware of such factors and tackle them as soon as possible. Following are some weaknesses of Barclays:

These are those factors that help Barclays grow in the industry. It should be able to capture such opportunities and make them their strengths. Following are some of Barclays Opportunities:

Lawful difficulties are additionally considered dangers. For example, The Serious Fraud Office (SFO) in the UK has accused Barclays Bank PLC of ‘unlawful monetary help’ identified with billions of pounds brought from Qatar up in 2008. Barclays holds a financial permit that permits it to work in various nations. In any case, if the bank was seen as blameworthy, it could lose that critical permit (BBC, 2018).

With this, we have completed the SWOT Analysis of Barclays. This study helps Barclays to know its internal and external factors better and make changes accordingly in the business.

On the study on the SWOT Analysis of Barclays, we know that it is one of the largest banks in the United Kingdom. It provides good returns on capital expenditure and customer-friendly mortgage plans. It also has large opportunities in the youth as knowledge of financial investment is growing. Even with such advantages, it has some flaws in the market.

Its involvement in controversies and low loyalty rates make a breach in the brand’s image. The large competition in the market also affects the company at large. These factors can be overcome by implementing proper strategies like improving its online reputation and making a better brand reputation. These come under advanced digital marketing skills which are very important in this digital age.  If you are interested in learning and upskilling, check out IIDE’s 3 Month Advanced Online Digital Marketing Course to know more.

If you would like to read such detailed analyses of companies, find more such insightful case studies on our IIDE Knowledge portal.