Punjab National Bank is a state-owned commercial bank that was India’s first ‘Swadeshi’ bank. It began operations on April 12, 1895, in Lahore, with only 2 lakhs sanctioned capital and 20,000 working capital. Today, PNB is the country’s second-largest public sector bank.

In the Punjab National Bank case study, we shall cover the bank’s marketing strategy throughout its extensive journey with the help of its marketing mix, marketing campaigns, SWOT analysis, and social media presence. Let’s get started by learning more about the company. 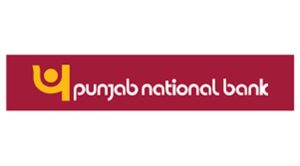 The Punjab National Bank (PNB) was established in the spirit of nationalism, and it was the first bank entirely run by Indians and funded entirely by Indian capital. PNB has since merged with 9 other banks throughout the course of its existence.

Personal and corporate banking, commercial, agricultural, and export finance, as well as international banking, are all available services offered by the financial institution. Its lending services include mortgages, car loans, and college loans. Indian conglomerates, small and mid-sized firms, non-resident Indians, and multinational corporations are among PNB’s diverse clientele.

Despite being a state-owned corporation, Punjab National Bank faces stiff competition from the likes of State Bank of India, Corporation Bank, Bank of Maharashtra, State Bank of Mysore, and others. Since the government owns a large portion of the bank, the interest rates set by PNB are lower than those set by private banks, which exist solely to make a profit.

While seeking profit, public banks must ensure that they are the bank of the people, fostering the country’s development. The RBI guidelines, competitor offerings, and business interest rates all influence PNB’s pricing decisions.

Punjab National Bank is a state-owned bank that is present Pan-India. Its headquarters are located in New Delhi. The bank has a large customer base of 188 million customers. It has over 10910 branches and 13000 ATMs spread across 764 cities. Given the bank’s extensive presence across the country, the figures show that accessing a Punjab National Bank branch is very convenient. Outside of India, Punjab National Bank has offices in Hong Kong, Dubai, Kabul, Kowloon, Shanghai, Sydney, and Oslo.

Punjab National Bank participates in a variety of corporate social responsibility programmes, including health screenings, tree-plantation campaigns, recycling drives, the installation of dustbins, the sponsorship of uniforms, and the adoption of villages, among others. This helps in promoting a positive and trusting image to the customers. Punjab National Bank had also partnered with cricketer Virat Kholi as a brand ambassador to garner the interest of young people. We talk about this later on in the blog, under PNB’s marketing campaigns. The bank also promotes itself through audio/video advertisements, print media, social media, underprivileged, and its own website. 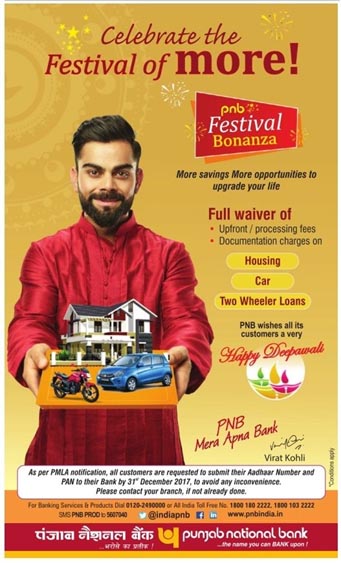 Punjab National Bank is a massive corporation with over 70,000 employees. PNB employs 919 people with disabilities, according to public records. This is a great way to support the underprivileged and contribute towards society. PNB Parivar is the company’s human resource management software, which refers to the workers as a family. It was established in 2006 with the aim of making payroll processing, wage payments, and employee loan monitoring more transparent. It also acts as a dashboard for all internal news, as well as questions about transfers and postings. This made the company an aspirational organisation for employees to seek employment under.

Punjab National Bank has expanded steadily in both organic and inorganic ways during its extensive journey in the industry. PNB was formed by the merger of nine separate banks, bringing it to its current scale. Some of these banks were:

Since it is a public sector bank, Punjab National Bank’s infrastructure is less technology-centric. It also invests comparatively lesser in customer service. Bottlenecks and bureaucracy are public-sector businesses’ commonly experienced problems, making it difficult to have above-average customer service. However, in terms of speedy transactions, a wide range of services, and extensive facilities, Punjab National Bank’s services are comparable to those of a private bank.

The marketing mix of Punjab National Bank is thus complete, with each strategy and its objectives detailed. Each of these help in envisioning the overall business and marketing strategies of a company. Let’s see how these align with PNB’s marketing strategy.

In this section of the blog, we shall talk about Punjab National Bank’s marketing strategy in terms of its STP i.e. segmentation, targeting, and positioning. Punjab National Bank segregates and targets existing high-value customers. PNB does not geographically segment an exclusive market segment since it has a wide presence in both rural and urban areas.

Their target audience includes people who are self-employed, corporate, or government workers in rural, urban, and metropolitan areas. It also targets teachers, people from low-income families, and others who are financially disadvantaged to avail their services. The bank mainly markets aggressively through print and television media, and via call centers and outbound sales forces to procure new customers or at least increase brand awareness.

Over the years, PNB has mainly positioned itself based on its value proposition. Today, it emphasises upon its telebanking, net banking, internet banking, and other value-added services with the aim to communicate its image as a value-providing bank. This is how PNB segments and targets its audience, positioning itself appropriately.

One of the most effective ways to position a brand and to communicate to a target audience, is by way of marketing campaigns. In the next section of the blog, we shall look at some of PNB’s campaigns.

Throughout its decades-long presence in the industry, Punjab National Bank has carried out many advertising and marketing campaigns. Following are two of the bank’s most popular campaigns: 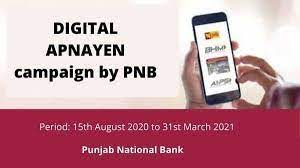 On the occasion of Independence Day, 15 August 2020, the bank’s Managing Director S S Mallikarjuna Rao launched the campaign. The campaign aimed to enable and encourage customers to use digital platforms and donate to the PM CARES Fund for COVID-19 relief through PNB. This Campaign was thus named “Digital Apnayen”. Under this campaign, the bank pledged to donate Rs 5 to the PM CARES Fund on behalf of each customer who made their first financial transaction to unlock their RuPay Debit card, either at a point of sale (PoS) or via an e-commerce site. It was an overall effort to get customers to avail their services while also contributing to a believed noble cause. 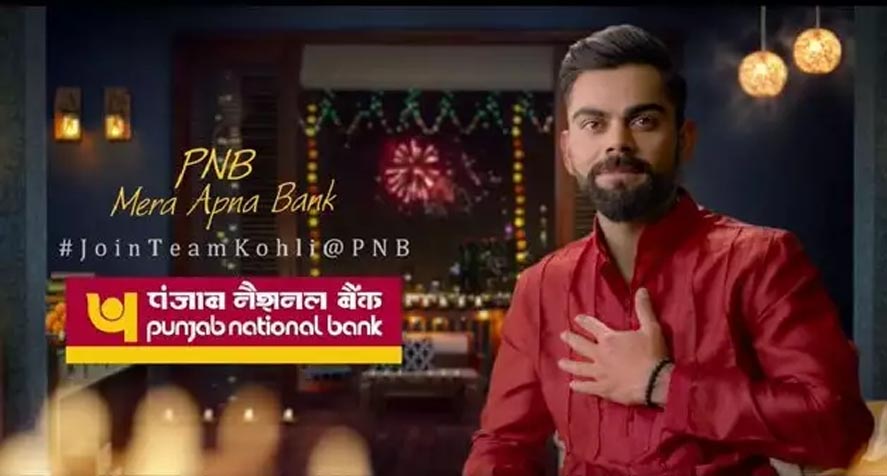 PNB’s then brand ambassador Virat Kohli featured in a host of advertisements. Ranging from festive ones, to informative ones, #JoinTeamKohli being the recurring hashtag used to encourage customers to join Virat in availing the bank’s services. The cricketer genuinely marketed the brand and was quoted saying that he was an account holder since he was 16. Each advertisement under these campaigns ended with an assuring “Mera Apna Bank” note from Kohli.

Advertising and marketing campaigns are also widely conducted via social media and digital platforms in today’s times. We shall thus analyse PNB’s social media marketing presence now and see how it manages to build its digital brand position.

Social Media today plays an important role for a company to make its brand accessible. As the use of social media increases by the day, it is becoming an important tool to reach out to potential customers and increase brand recognition. We  Following is PNB’s digital presence summary: 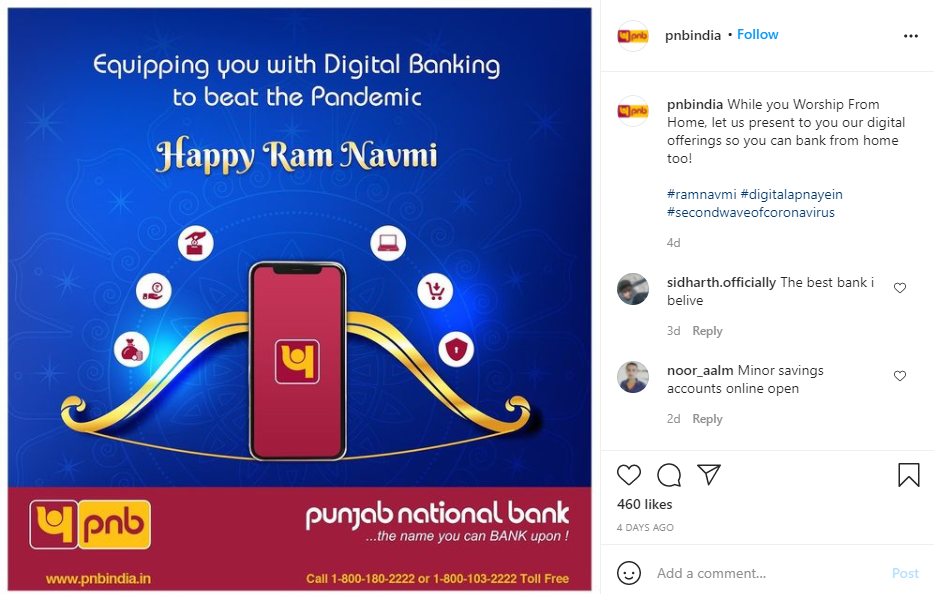 PNB is certainly trying its best to be engaged with its digital audience and post relevant content accordingly.

Finally, using all of the information we collected, we conducted PNB’s SWOT analysis to summarise its position and operations.

The SWOT analysis of a business spells out its strengths, weaknesses, opportunities, and threats, all of which can lead to the company’s downturn or growth. It is a form of strategic planning that helps an organisation determine its current position. The SWOT analysis of Punjab National Bank can be seen in the table below:

The Punjab National Bank has managed to be in business for many years. Its core services and offerings are up to industry standards. As we discussed in the marketing mix, they are very accessible to the general public and also use standard promotional techniques to increase their client base.

Their marketing efforts over the years had proven successful, along with their social media presence as well. But due to their brand’s coverage in recent controversies, the common man’s perception remains hesitant and unfavourable. They need to actively work on revamping their brand perception and image to be able to gain consumers’ trust and business.

That brings us to the end of this case study. We hope you enjoyed reading this blog and found our information useful. If you did, share it with your peers and friends and like the blog. Thank you!