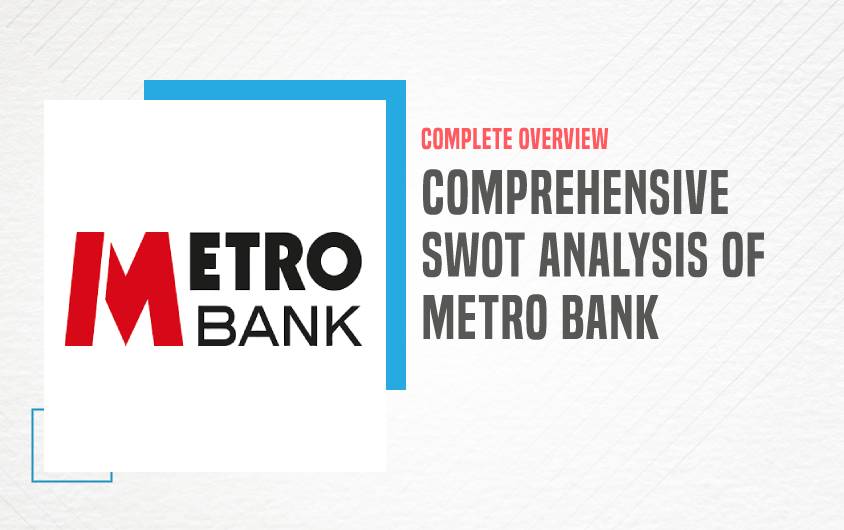 In this case study, we will learn about Metro Bank SWOT analysis. Let’s dive right in.

Metro Bank PLC is a retail and commercial bank based in the United Kingdom that was founded in 2010 by Anthony Thomson and Vernon Hill. It is a company that trades on the London Stock Exchange. Within ten years of its inception, it planned to open between 200 and 250 branches in Greater London. Its first location, in Holborn, central London, opened on July 29, 2010. 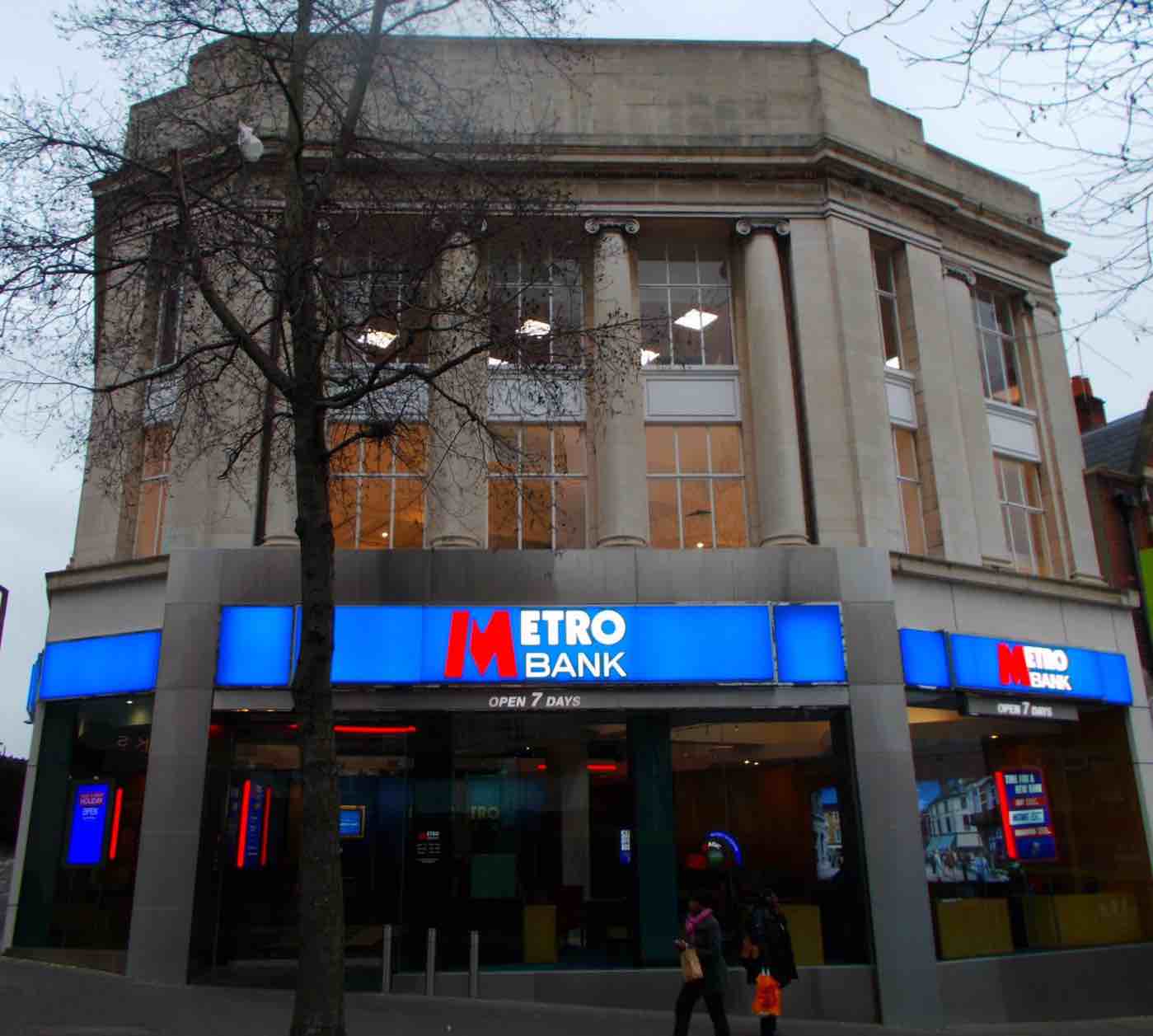 They’ve created a unique type of high-street bank. A bank with locations that are open when it is convenient for you, seven days a week. A bank where you can walk in without an appointment and leave with a working account, debit card, and everything.

Now that we’ve covered the company’s fundamentals, let’s look at Metro Bank’s S.W.O.T analysis in the section below.

It’s an excellent tool for determining where the firm thrives and where it falters, designing countermeasures, and determining how the organization may expand. So, in the part below, we’ll look at the SWOT analysis of Metro Bank.

Starting in the list of Metro Bank SWOT Analysis, we have the strengths. These are an organization’s distinguishing qualities that provide it with a competitive advantage in acquiring more market share, attracting more customers, and maximizing profitability. Some of Metro Bank strengths are as follows:

Metro Bank has a large distribution network in the United Kingdom, with 77 branches and 2300 ATMs in almost every state. It also supports the customer through a strong distribution network (outlets) all over the world, making it easily accessible to a large number of customers on time.

Metro’s low-cost structure enables it to produce at a low cost and sell its products at a low price, making it affordable to its patrons.

Metro Bank Plc has a strong relationship with its dealers, not only providing them with supplies but also focusing on promoting the company’s products and providing training.

Metro Bank Plc has a strong financial position, with five years of consecutive profits and profit reserves that can be used to finance future capital expenditures.

Return on Capital Expenditure: In the past, Metro Bank Plc has been able to generate positive returns on capital expenditures incurred on a variety of projects.

Automation of various stages of production has allowed for more efficient resource use and cost reduction. It also allows for product consistency and the ability to scale up and scale down production in response to market demand.

A company or brand’s weaknesses are elements that need to be improved. So let’s take a look at some of Metro Bank weaknesses:

Decisions are highly centralized, and team decisions must be approved by specific officials. This reduces operational efficiency by making them more time-consuming. It has a negative impact on innovation as well.

While Metro Bank Plc spends more than the industry average on research and development, it spends far less than a few industry players who have gained a significant advantage as a result of their innovative products.

Metro Bank Plc rents out a significant portion of its property rather than purchasing it. It must pay high rent on these, which adds to its expenses.

The performance evaluation is not done in a systematic manner. People’s performance is frequently not evaluated. Employee morale suffers as a result, as do their chances of advancement.

Opportunities are places where a company might concentrate its efforts in order to enhance results, sales, and, eventually, profit. So, let’s have a look at what type of opportunities Metro Bank has to produce outstanding achievements.

The number of people who use the internet is growing all over the world. This means that Metro Bank Plc has an opportunity to expand its online presence by interacting with its customers via the internet.

Automation can be used for operations to reduce expenditure. Innovation empowers better information to be gathered on clients and enhances the marketing strategies, which results in the growth of the market with new customers.

Metro Bank Plc is not constrained to its own country as a result of increased globalization. It can expand its operations to other countries, entering these markets and capitalizing on the opportunities that exist there.

There has been a new trend and an increase in the e-commerce industry’s sales. As a result, many people are now making purchases online. Metro Bank Plc can generate revenue by establishing online stores and selling products through them.

The population has been growing and is expected to continue to grow in the coming years. This is advantageous for Metro Bank Plc because it increases the number of potential customers that it can target.

Threats are environmental factors that can inhibit a company’s expansion. The following are some of Metro Bank’s threats:

Numerous players have entered the market and are gaining market share by acquiring the market share of existing companies. Metro Bank Plc faces a threat as a result of these new entrants, as it may lose customers.

The industry’s competition has increased, putting downward pressure on prices. If Metro Bank Plc reacts to the price changes, it may lose market share, but if it does not, it may lose revenue.

Constant technological advancements necessitate training for the workforce, as failure to keep up with these changes can result in Metro Bank Plc losing business.

Political uncertainty in the country proves to be a barrier in business, sometimes hindering performance and causing the company to incur unnecessary costs.

Now that we’ve thoroughly explored Metro Bank SWOT Analysis, let’s wrap up the case study in the section below.

Metro Bank has grown well despite the challenges it faced when it first launched as a new high street bank. Its information technology system appears to be a competitive advantage for it. It sees capital holding requirements, the ability of larger banks to subsidize new customers, and indirect access to payment systems as major impediments to further expansion. Metro has also adopted a branch-based business model in order to promote and acquire customers.

It can also improve its goal-setting procedures by better understanding the target audience and focusing on them accordingly. As a result, Metro Bank can compete fiercely with its competitors.

Please share your thoughts on this case study in the comments section below. Thank you for taking the time to read this, and if you found it interesting, please share it with your friends and family and check out IIDE’s Free Masterclass on Digital Marketing.