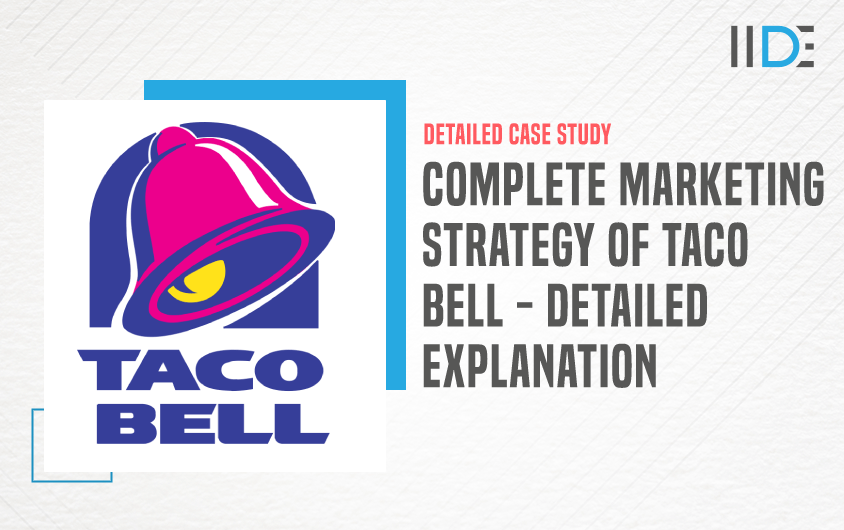 In our previous blog, we learned about the SWOT analysis of Dunkin’ Donuts. In this article, we are going to talk about the marketing strategy of Taco Bell based in the United States, and also one of the largest Mexican food chains in the world, as well as a quick-service restaurant.

Taco Bell is the 4th best fast-food restaurant. Taco Bell has been functioning since 1962, which indicates that they are winning the hearts of its customers for the last 6 decades. Does the question strike your mind? It’s because they have invented and delivered food that people relish and will continue with this performance in the future as well.

Another vital feature that makes Taco Bell so successful is its amazing marketing practices. The world is evolving with everything moving online, it has become important to market your business online using the latest tools and technology. If you feel the urge to grasp more knowledge about digital marketing. Give a shot at our Free Masterclass on Digital Marketing especially prepared and brought to the table for beginners by our CEO Karan Shah.

Excited to learn about how Taco Bell became so successful in the fast-food industry? Stay tuned in with us as we will take you through a complete marketing strategy of Taco Bell and will help you decode the answer. Before commencement, let us learn more about Taco Bell. 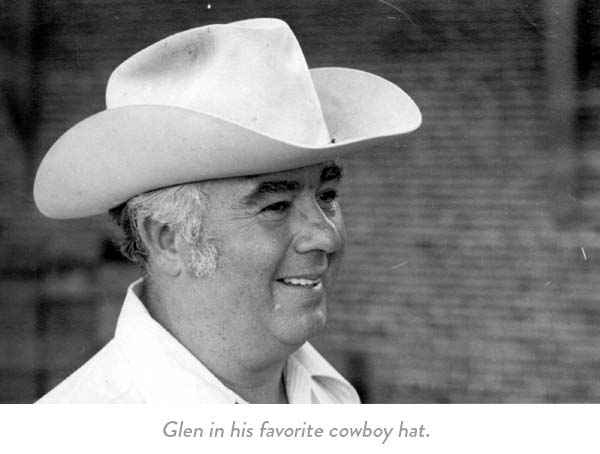 Taco Bell was founded by Glen Bell in Irvine, California 1962. It is an American-based fast-food restaurant that delivers a variety of lip-smacking dishes that are Mexican-inspired foods, such as tacos, burritos, quesadillas, nachos, novelty, and speciality items.

Taco Bell which was previously a subsidiary of PepsiCo is now a subsidiary of Yum! Brands and serves about 2 million customers every year. It has 7072 restaurants out of which more than 93 per cent are owned and operated by independent franchisees and licensees.

It all started in 1948 with a small hot dog stand when the founder Glen used to sell hot dogs on the street, later he saw that a Mexican restaurant named Mitla Cafe is getting immense traffic from customers for hard-shelled tacos. Glen started learning the recipe for Tacos and eventually he attempted to reverse-engineer the recipe in his style with the idea of selling crispy-shell tacos from the window of his hamburger stand which really got successful among Mexican eaters and became the foundation of Taco Bell in 1962.

Before settling on Taco Bell in 1962 it went through several name changes from 1951 to 1961 from Taco-Tia through El Taco, finally, in 1962 the popular taco-selling shop got the name Taco Bell.

The demographics-based segmentation is geared toward young people and kids between the ages of 18 and 35. The market sector is divided by income categories, with attention focused mostly on the lower-middle-upper income group. Those that fall under the behavioural category regard fast food as a cheap alternative to a healthy diet.

The target demographic is young people and children in the middle and upper classes between the ages of 18 and 35. To keep up with the younger generation’s tendencies, the menu includes healthier selections. Fitness enthusiasts who appreciate eating wholesome snacks or meals are drawn to this.

Taco Bell has positioned itself in a market where consumers prefer healthier fast food, and as a response, it has expanded its menu to include wholesome items. 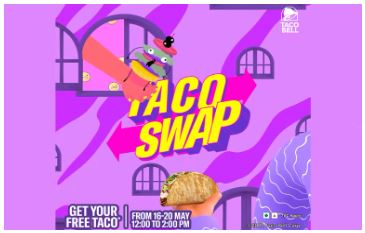 TACO BELL hosted a four-day taco swap in May 2022. It was a multi-market promotion that spanned 25 countries. During this campaign, participants can exchange their lunch meal for a complimentary taco. They collaborated with Avneet Kaur and other influencers for this campaign. In the taco-loving community, TACO BELL has developed customer loyalty. The goal of this promotion was to increase customer engagement and persuade people to switch their meals for free.

The campaign got successful and the likes on their social media posts such as Instagram increased by 3x more compared to the previous posts. It was the continuation of the ‘ISEE TACO campaign which was TACO BELL’s first global marketing campaign. 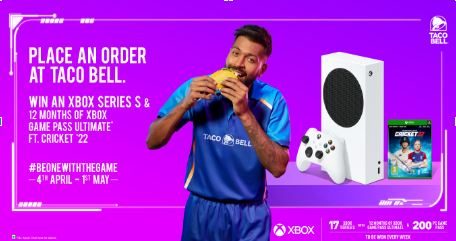 This campaign ran on Instagram from April 4th to May 1st, 2022, with Hardik Pandya and several other influencers and celebrities using the hashtag #BEONEWITHGAME. Anyone can enter the contest by just ordering a taco from TACO BELL. One lucky winner gets an Xbox One S, as well as a 12-month subscription to Xbox Game Pass Ultimate, which includes cricket 22 and PC game passcodes. There were more than 60 winners, each receiving an Xbox One S and other prizes.

This ad is targeted toward gamers and the Gen Z audience. This campaign was a huge success thanks to the high level of customer interaction. Just by collaborating digitally, the reels’ videos and posts grew by 3x.

TACO BELL astonished its customers by introducing the greatest cheese taco at a reasonable price in this ad. Following the success of their cheese burritos and quesadillas menu, this was created for their cheese-loving taco fans. By making posts and reel videos, this campaign was created in digital partnership with comedian Akash Gupta and other celebrities. This promotion was created in partnership with the Age of Empires:4 PC game. Participants can join by ordering via the Taco Bell website or app, or by simply going to a restaurant, and using the hashtag #Gameforthecheese.

The post and associated video for this campaign received 3x the number of likes as a previous post. After a successful launch of cheese burritos and quesadillas, they expanded their menu. 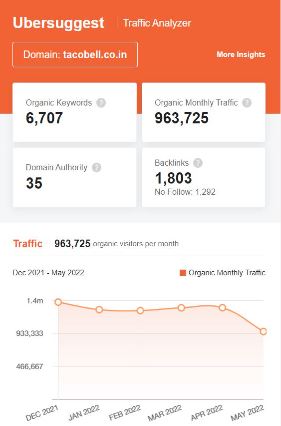 As per SEO ranking, it is said that the number of keywords – below 500 is bad, above 1000 is good, and 10,000+ is amazing. As we can see that www. tacobell.in 6,707 has organic keywords and it’s considered as good. That means the digital marketing of taco bell is gaining a good number of insights.

Also, the traffic per month is around 100k which is amazing. Hence, taco bell does not require improvements.

When it comes to e-commerce methods, Taco Bell has a website where they sell their items with discounts. Apart from that, it has partnered with other meal delivery apps like Zomato and Swiggy to bring food to eateries, and users can even order via Instagram.

Taco bell has its own app taco bell IN with 100k downloads in the play store. one can order via their app as well. Users can officially download the Taco Bell® app from the app store and play store. You can also earn points on every qualifying order and reward yourself with free food. Gain access to exclusives only available on the app. Order tacos for delivery or pickup.

Conclusion — What is unique in Taco Bell’s marketing?

TACO BELL is a one-of-a-kind healthy fast food quick-service restaurant that delivers nutritious tacos, burritos, and quesadillas. TACO BELL is gaining popularity among young people and fitness enthusiasts around the country. Because it is the only taco brand in the food market, there is less competition. Taco Bell’s innovative marketing techniques include collaborations with game developers, cricketers, and influencers. Taco Bell is the only company that collaborates with games and rewards participants with items valued at up to $30,000.

If you like such in-depth analysis of companies just like the marketing strategy of Taco Bell check out our IIDE Knowledge portal for more fascinating case studies.