Comprehensive Marketing Strategy of McDowell’s No. 1 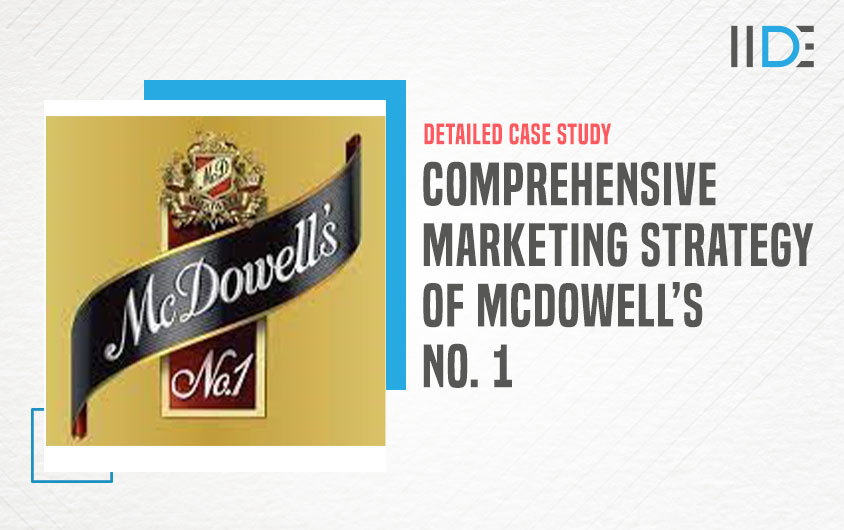 McDowell’s No.1 is one of the largest selling whiskey brands in the world today, thanks to its marketing strategies. It’s a brand that has become extremely popular among liquor enthusiasts or what we usually refer to as “Yaars”.

In this case study, we take a deep dive into the Marketing Strategy of McDowells No 1 that made them successful, along with their marketing campaigns, marketing mix, SWOT analysis and competitor analysis.

So let’s start this case study by learning more about McDowell’s No 1. 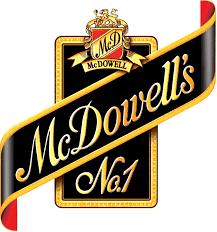 McDowell’s No. 1 is the largest selling umbrella brand of spirits in the world. It is the flagship brand of United Spirits Limited, a subsidiary of Diageo. The name ‘McDowell’ originated after the Scottish distiller Angus McDowell.

This liquor brand began with the launch of their Brandy in 1963-64, Whisky in 1968 & Rum with Celebration(dark), and Caribbean(white) variants in 1990-91. The brand also offers complimentary products such as soda and bottled water.

It also focuses more on the merger of top brands that are already existing like Shaw Wallace, Baramati Grape Industries, Triumph Distillers, and Vintners Ltd, and many more to expand its brand offerings.

Let us now look into the marketing mix of McDowell’s No 1 which will give us an understanding of their basic information and strategies that define the brand. 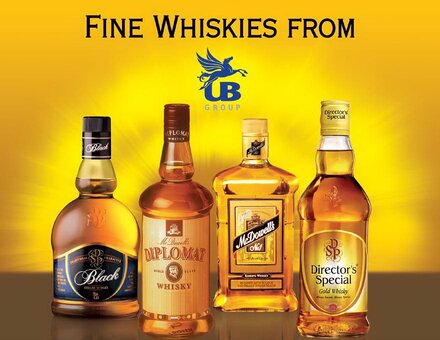 The major products of McDowell’s No 1 are related to alcoholic drinks. They sell whisky, rum, and brandy. Its alcoholic beverages are one of the successful products in the market.  The main focus of the brand is to build trust with the customers.

It has a variety of drinks to offer based on providing different taste experiences.

For example, the new McDowell’s No 1 – Original promises that it will give a more balanced whiskey experience without leaving the original taste.

On the other hand, McDowell’s No 1 – Luxury will offer customers a superior experience.

The brand understands that a high percentage of alcohol drinkers usually prefer alcohol at an affordable price range. That’s why the products released by McDowell’s No 1 are lowly priced as compared to other brands.

The pricing strategy is based on the distribution costs and also on the value of production. Also, their prices have to be comparative with other alcoholic products in the market.

Currently, McDowell’s No 1 has conquered almost every area of India by opening its distilleries. Also, they are serving in around 20 countries across the world.

Apart from India, this brand has subsidiaries in Africa, Japan, the Middle East, and the United Arab Emirates.

McDowell’s No 1 uses eye-catching taglines and focuses on product packaging and bottle designs to stand out from the crowd. They ensure that the quality of their products is maintained at the highest order.

It has sponsored various music events and is also associated with many Bollywood films in India.

Now we have seen the 4P’s of the marketing mix of the company,  let’s go through its SWOT Analysis in the coming section.

SWOT Analysis of McDowells No 1

SWOT analysis means analyzing the strengths, weaknesses, opportunities, and threats faced by a company. Here, let’s have a deep SWOT analysis of McDowell’s No 1.

1. Strengths of McDowell’s No 1

2. Weaknesses of McDowell’s No 1

3. Opportunities of McDowell’s No 1

Now that we understand the company’s core business, let’s take a look at the marketing strategy of McDowell No 1

Marketing Strategy of McDowells No 1

The Marketing Strategy of McDowell’s No 1 revolves around maintaining a premium brand image in the mind of the audience. Content and influencer marketing have always been an important part of its promotion mix.

It makes relevant content and value-adding which appeals to its consumers. It always comes up with topics in trends and related conversations to attract the young generation.

The brand has sponsored several music concerts in India featuring artists such as Mark Knopfler, Enrique Iglesias, Elton John, Shankar–Ehsaan–Loy, Vishal Dadlani, Shekhar Rajviani, Mika Singh, and many more. The brand has always banked on associating itself with Music which also led to McDowell’s No 1 releasing theme songs of its own in collaboration with various artists.

McDowell’s No 1 is also an associate sponsor of IPL. It has also associated itself with Bollywood films like Devdas, Road and Kaante through its “Mera No 1 Entertainment banner”. 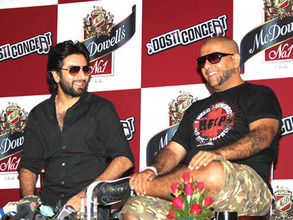 Now that we understood the marketing strategy of the company, let us see the successful marketing campaigns led by McDowell’s No 1

Marketing campaigns run by the brand are always according to its sales target, demographics, and product launches.

McDowell’s No 1 is one such brand that is known for its marketing campaigns. We will take a deep dive into some of its most iconic campaigns and why they touched the hearts of its customers.

The advertising film attempts to show the genuine friendship between the Indian cricketer Mahendra Singh Dhoni and his childhood friends. Dhoni revisited his hometown Ranchi and met his ‘Bachpan Ke Yaar’.

The film tried to bring out the real friendly chemistry between Dhoni and his friends. It shows how these three people have nostalgia for the years they have spent together.

No.1 Yaari Jam is a music platform that was launched in 2017. It is a partnership between McDowell’s No.1 Soda and Hungama.

It released 5 engaging soundtracks by famous music artists across India. The popular duo, Salim & Sulaiman Merchant, were the directors.

The No.1 Yaari Jam is a platform where music enthusiasts can collaborate with artists to create new music and showcase their stories to the world. It has inspired a lot of people across India. It was clear that McDowell’s No 1 wants culture and music to be the main elements of its core philosophy.

The campaign is a tribute to Yaars (a friend) who celebrate another Yaars successes and moments of joy. This campaign, just like its campaigns, revolved around showcasing friendship and brotherhood.

The face of the campaign was none other than Vicky Kaushal and the advertisement highlighted moments of his life before he became an actor.

Portraying his journey from doing an engineering job to pursuing acting and now signing autographs at Cannes.

The campaign beautifully depicts how his Yaars always stood by him and surprised him at moments he did not expect them to.

Brand Ambassadors of McDowells No 1

Using popular celebrities as a brand ambassadors is common and can also turn out to be a successful marketing strategy. Mcdowell’s, being a liquor brand that uses surrogate advertising, banks heavily on celebrities. As of now, Farhan Akthar and MS Dhoni are its Brand Ambassadors.

A target audience is a specific group of customers to whom the business targets specifically and directs their marketing of products and services. Let us see who are McDowell’s target audience:

Social Media Presence of McDowells No 1

Social media is an amazing platform to express one’s views or feelings. It is the basic way to popularize a brand in all parts of the world. 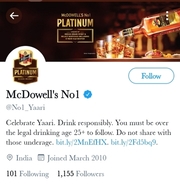 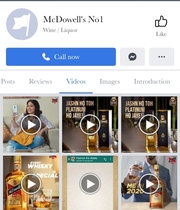 These are some of the posts of  McDowell’s No 1 on its social media accounts. Now let’s see how McDowell’s No 1 stands in its position with its competitors. So let us conclude this case study in the coming section.

Despite its strengths and opportunities, McDowell’s No 1 uses its unique tactics to compete by getting rid of its weaknesses and threats.

Let’s see how McDowell’s No 1 strategies differ from that of their competitors: 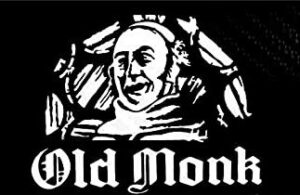 Old Monk was launched in 1954 and it was the largest selling dark rum in the world for decades. Celebration Rum by McDowell’s No 1 has been a long-term rival of Old Monk. Old Monk has lost so much ground that it now only sells about a quarter of the volume of McDowell’s No. 1 rum. 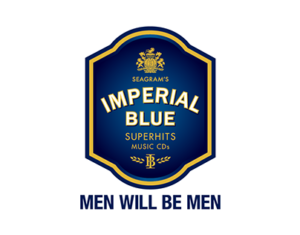 Imperial Blue is the third highest-selling whiskey brand which was launched in 1997. It’s one of the country’s most popular budget whiskies. McDowell’s sold 25.6 million cases and Imperial Blue sold 18 million cases.

Bacardi is a family-owned spirits company in the world founded in 1862. Bacardi and McDowell’s have been in close competition since 2012.  In 2014 Celebration Rum overtook Bacardi by selling 18.3 million cases over 18.2 million cases of Bacardi.

Today McDowell’s No 1 whiskey brand sells more than 29 million cases per year, which is why it is the second-largest selling whiskey brand in the world.

It became one of India’s biggest alcohol brands by introducing some of the best marketing campaigns which helped the company gain a healthy market share from its competing rivals. They always focus more on innovation which gives them the edge over their competitors.

With this, we come to an end of McDowell’s Marketing Strategy.  Le’s conclude this case study in the coming section.

McDowell’s No 1 brand has always attracted customers through its campaigns.  We have also seen earlier that the brand is promoting friendship throughout its campaigns. They are always creating a brand image with their interactive campaigns which helps them to reach out to their target audience.

In our opinion, McDowell’s No 1 is a brand that has a good position in the market and they are maintaining this position by building trust, assuring the product quality, and executing multiple campaigns.

Thank you so much for giving time and reading this blog. If you wish to share your thoughts about what you read, please do so in the comments section below (your inputs are valuable). For more blogs, you can check IIDE’s website. If you wish to learn more about Digital Marketing, here’s your chance to upskill yourself by attending free weekly Digital Marketing MasterClasses by IIDE.