Whenever someone says “let’s go to the supermarket”, you get a strong recall of either DMart or Big Bazaar, isn’t it? That’s why in this case study, we would go through Big Bazaar’s parent organization, Future Retail Limited, to understand the marketing strategies it has implemented that reinforce such a strong brand recall in the minds of customers.

We would go through the marketing strategy of Future Retail by understanding the 4Ps of the marketing mix, its marketing and campaigns strategies along with its digital marketing overview by going through its social media presence and website analysis. So let’s get started by first knowing about Future Retail.

Future Retail, which is a part of the Future Group, is one of the fastest-growing retail companies in India. It was incorporated in 2007 and is currently headquartered in Mumbai, India.

Being one of the country’s well-known brick-and-mortar retail chains, it operates approximately 1500 stores in India and has established itself under the brand names such as Big Bazaar, Hyper City, Ezone, Easyday, Foodhall, etc.

It sells everything from household goods and groceries to apparel, electronics, toys, games, and health & beauty products. 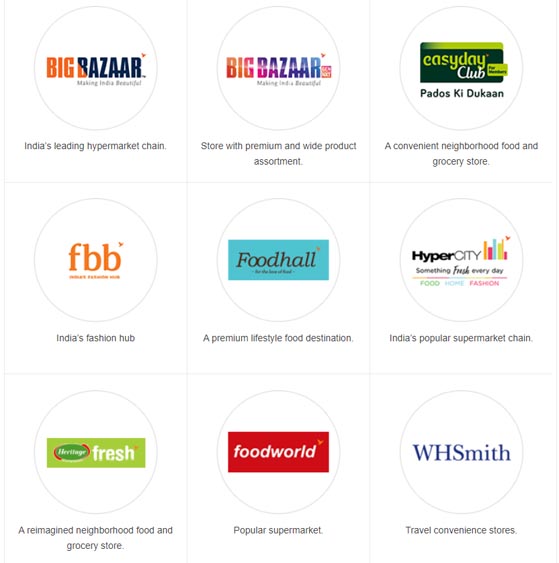 Future Retail is a listed entity on the Indian Stock Markets and is currently a subsidiary of Future Group.

Now that we know a brief about Future Retail, Let us now understand further by understanding its marketing mix in the coming section.

The marketing mix model is designed to solve the most basic problem of marketing, which is how to influence customers. It also helps in understanding a business from a marketing point of view. This model is based on four basic parameters, i.e product, price, place, and promotion.

So let us go through the marketing mix of Future Retail by starting with the product parameter:

So this is how Future Retail provides customers with a wide selection of products and services under various retail brands.

The major Unique Selling Proposition (USP) of all the major brands of Future Retail is offering lower prices: 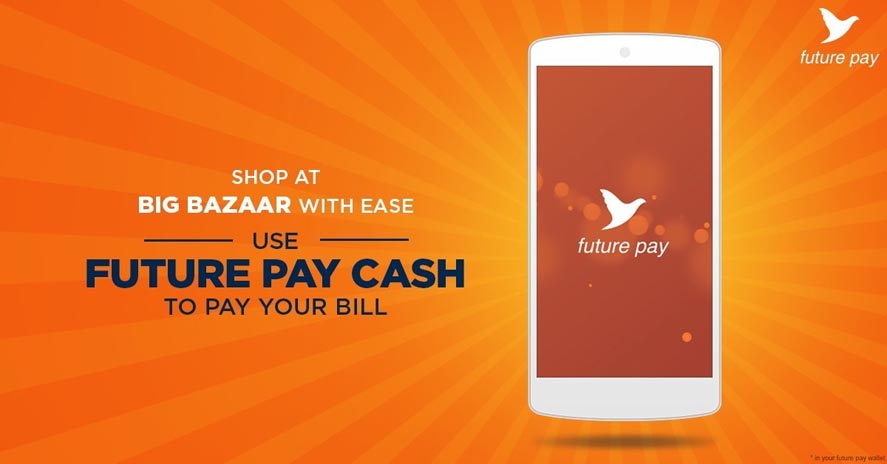 Future Retail’s pricing policy has helped them attract customers which have heavily contributed to increasing its market share among its competitors.

Future Retail has its presence almost everywhere in India, which makes it the most preferred retailer by the customers: 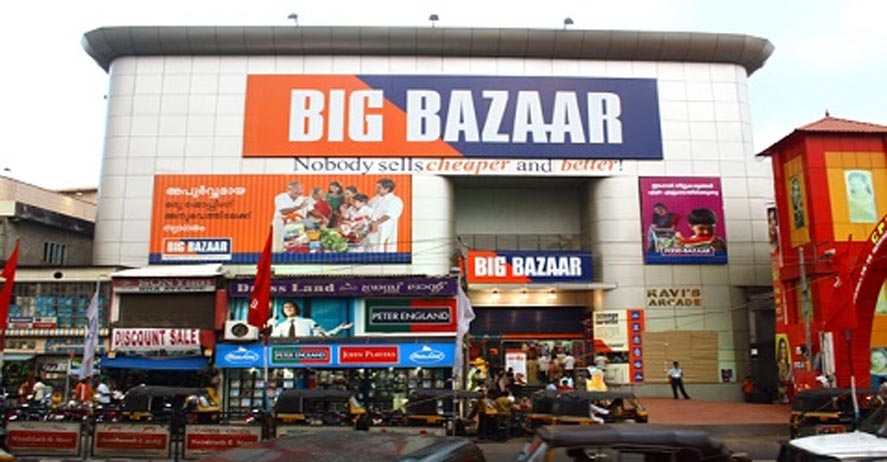 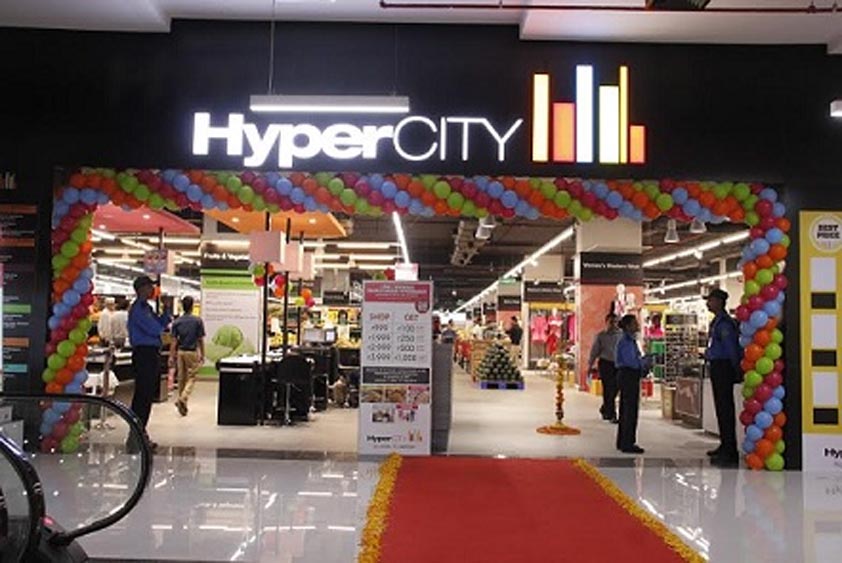 The place is also one such factor that has helped Future Retail to reach out to maximum customers.

Future Retail has been very aggressive when it comes to the promotion of its brands. it encompasses a wide range of marketing activities for all of its events: Future Retail incorporates various other steps to enhance the customer experience, not just in terms of just promotion but throughout all the other parameters as well.

Now that we know a little more about Future Retail as a company, let us now further understand its marketing strategies and campaigns which helped them position themselves strongly in the minds of customers.

Every business wants to have an edge over its competitors, and the retail giants are not an exception. It is the marketing strategy that makes a brand reach a position of distinctiveness in the eyes of its customers.

In this section, we will go through the marketing campaigns undertaken by Future Retail which led them to be one of the top retail giants in India.

Big Bazaar is the flagship brand of Future Retail. It has been in business for more than 20 years now and has established a name for itself. Its marketing activities are moreover these days focused on creating awareness and promotion of the Sale Days.

Sabse Saste 6 Din roughly translates to 6 days of lowest possible pricing at Big Bazaar. This campaign was launched to promote and create awareness regarding the Sale Day Events of Big Bazaar.

It also related this recent Sale Day launch with the Covid-19 Vaccine launch and themed the sale as Bachat Paane Ki Vaccine. The below ad beautifully portrays the theme of the campaign with a subtle tone to entice customers to come and shop at Big Bazaar. 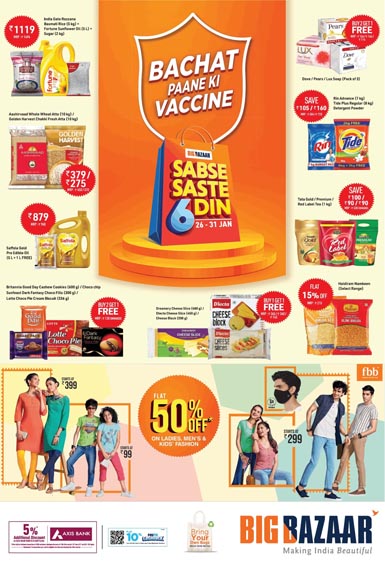 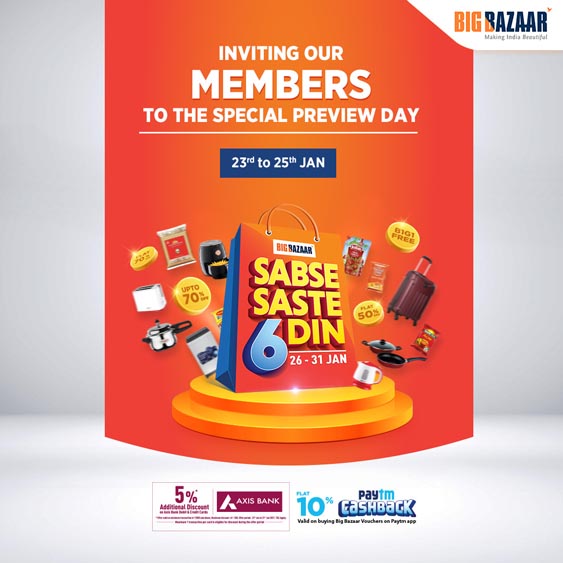 Big Bazaar has been working very well both, online and offline, to promote its Sale Days. It uses a very attractive tone of colours to attract customers. It also makes sure it gets the first-page advertisement from the pre-sale to the final sale day.

Marketing and Campaign Strategy of FBB

Future Group’s Fashion at Big Bazaar (fbb) is the face of its fashion division. It was established in 2008 and is usually found at various malls in popular cities and towns of the country.

Sara Ka  Sara Below 599 – A Marketing Campaign of Fbb

Fbb launched a campaign to promote its Sale Day, a marketing strategy similar to how Big Bazaar uses to promote and create awareness among the general public.

“Sara Ka Sara Below 599” roughly translates to “Anything and everything below 599”. 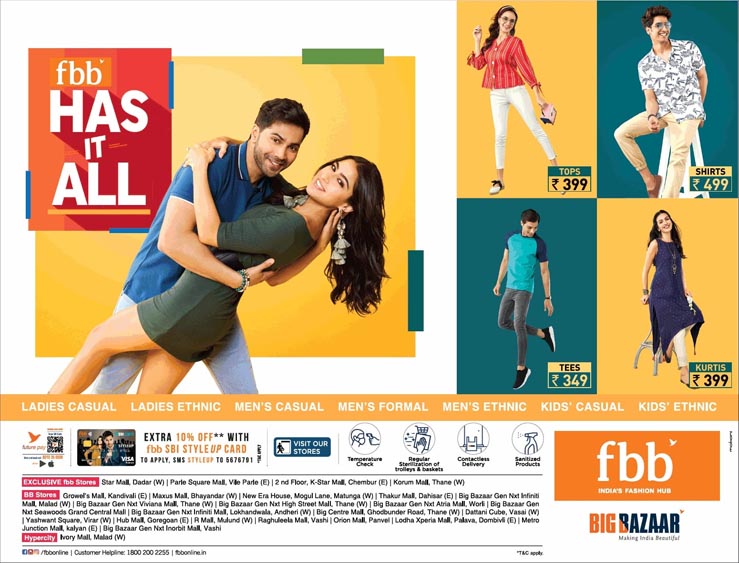 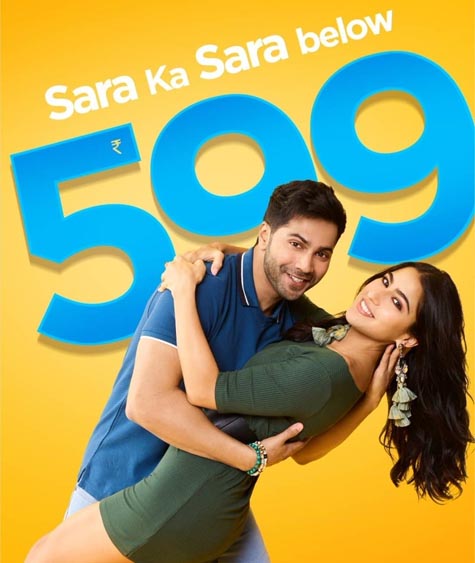 Easyday Club is an Indian retail brand owned by Future Group that runs chains of consumer retail and convenience stores. It majorly deals in providing discounts and home delivery services of Food and Grocery items. 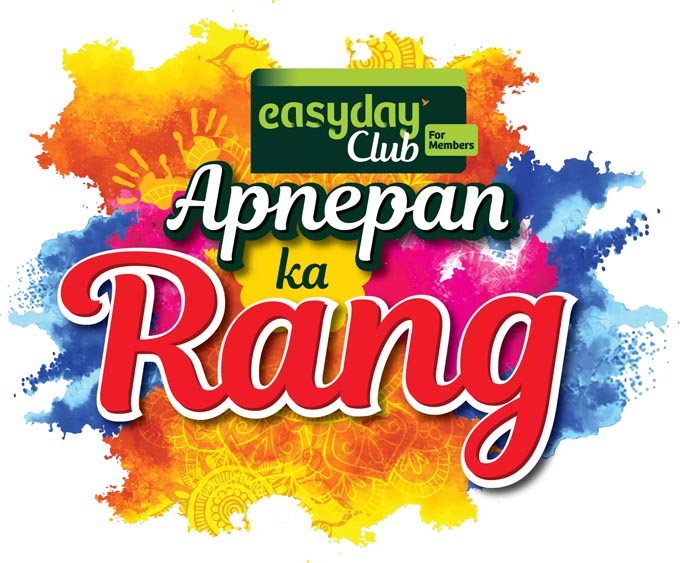 Easyday Club has launched its Holi festive campaign ‘Apnepan Ka Rang’ (Colour of Emotions). This campaign showcases how its delivery partners deliver the goods in time despite all the hustle and bustle going around them. It also highlighted the facility of online ordering via this campaign to create awareness. 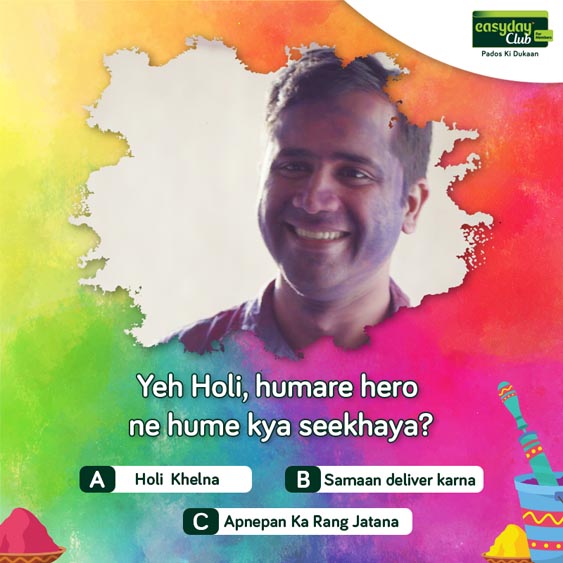 These were some of the popular marketing campaign undertaken by Future Retail to promote its brands. Let us now go through the digital presence in the next section.

Traditional marketing and advertising can still be very effective in creating demand for your product or service. However, with the incredible growth of social media, it is not enough to simply have a website with an about page or business description. There must be an online presence and interaction with social platforms.

Future Group is one of the country’s most appreciated businesses for its e-commerce plan as well as its marketing approaches.

In Future Retail’s case, it is one of the few companies that have a very strong presence both offline and online. It always comes up with a complete marketing plan to promote its events. With that being said, let us go through its social media presence.

Future Retail is one of the most diversified retail companies and has a very active social media profile. Most of their brands maintain a top-notch presence on social media.

Some are running campaigns and other brands like Big Bazaar have a subsidiary channel called Big Bazaar Foods which showcases food recipes and also brings in revenue from youtube and thus adding more to the marketing budget.

Here is a quick overview of Future Retail’s brands on Social Media:

As we previously said, It has a great reputation in the markets when it comes to social media profiles, and here are a few examples to show you how it has been successful in catering to its customers through social media: 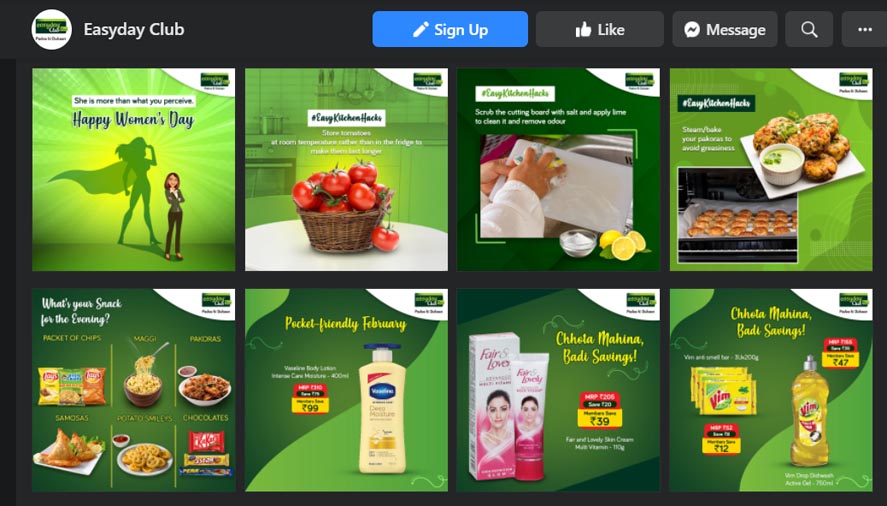 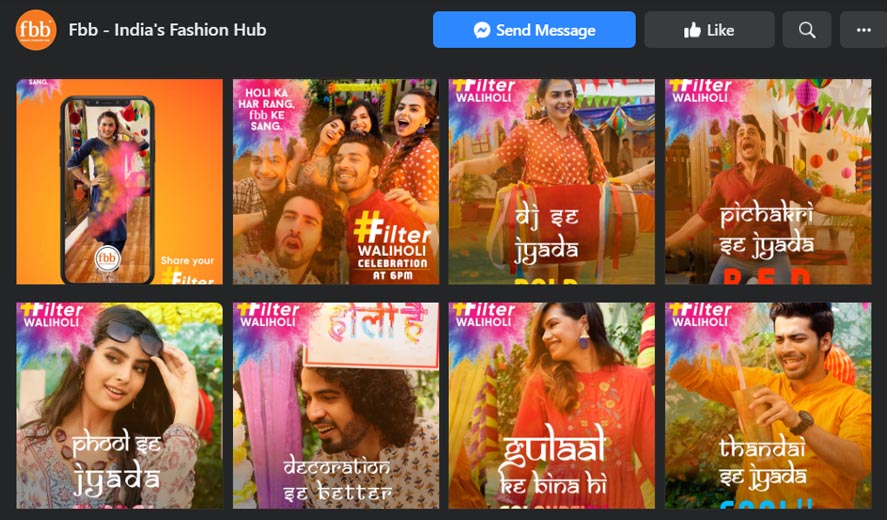 From the above table, we can interpret that Future Retail’s popular brands have a very low subscribers count compared to its followers on other social media platforms.

At the same time, Big Bazaar Food has almost five times the number of subscribers compared to the total subscribers of all the three main channels. It is a very unique strategy implemented by Future Retail to remain connected with the homemakers with its cookery videos.

However, Future Retail should focus more on its main youtube channels as they can also increase engagement with the customers and at the same time add more to the revenue.

Currently, Future Retail is working on creating a single portal, www.shop.bigbazaar.com, under which all the Future Group’s offerings are available.

This is done to provide customers with a rich and seamless experience of the brand they are looking for, be it their local shop or any one of their e-commerce sites.

Future Retail’s mission is to be a provider of integrated multi-channel consumer experiences through its businesses. Its strong belief is the customer should have access to quality products all under one ecosystem which will enable a frictionless shopping experience for customers.

Reliance Retail has also acquired Future Group but the deal has been halted temporarily over agreement disputes. However, once the deal gets materialized in the near future then we might see a brand new portal under Reliance Retail.

With this our case study on Future Retail comes to an end, Let us go through the final summary in the final section.

If you take a narrow definition of retail – just what is sold in stores – you would find Future Retail among the top 10 retailers in the country. Take a broader definition, which includes everything sold through stores and all of the supply chain associated with that, and there are only three companies of any size that do more business: Walmart, Flipkart, and Future Group.

With already strong marketing authority in place and a probable acquisition by Reliance Retail can take the company to new heights with customers being the ones who get the most benefits out of the same.