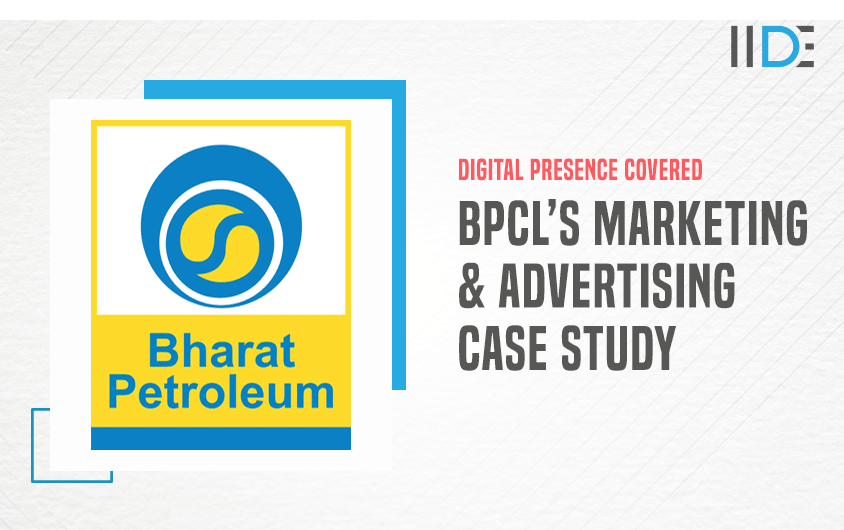 Bharat Petroleum Corporation Limited (BPCL) is one of the leading players in the oil and gas sector of India. It is also regarded as one of the most important companies in India as it produces and markets one of the most essential commodities that drive the growth of any country.

This case study on marketing strategy of BPCL deep dives into 4Ps of the marketing mix, its marketing and advertising campaign strategies along with its digital presence.  So let’s start by knowing more about BPCL in the coming section. Bharat Petroleum Corporation Limited is a state-owned oil and gas corporation, incorporated in 1952. It became a Maharatna Company in September 2017 and is currently headquartered in Mumbai, Maharashtra.

It is engaged in businesses such as Oil Refinery, Aviation Turbine Fuel (ATF), Lubricants, Liquified Natural Gas (LNG), and Liquified Petroleum Gas (LPG). It is also an Oil Marketing Company (OMC) that operates in retailing fuel such as Petrol and Diesel.

BPCL is a listed company on NSE and BSE and also has investments in many popular companies such as Petronet LNG, Indraprastha Gas, and Oil India.

To some extent, it seems that BPCL is one of the powerhouses in its business niche. Let us understand more about the company by understanding its marketing mix.

The marketing mix is usually represented by a model of 4Ps, which stands for product, price, place, and promotion. Below explained are the four Ps of the marketing mix of BPCL:

Product strategy is related to the physical features as well as the quality of products and services. It is also related to customer-perceived benefits.

BPCL is mostly a Business-to-Business (B2B) entity except for its oil marketing business that includes retail selling of petrol and diesel.

Price here refers to the cost of the product or service at which a company sells to its customer.

BPCL, being an oil and gas sector company, heavily depends on the price of crude oil in the international markets.

Place is related to distribution channels and the area of availability of the products and services.

BPCL has businesses such as Fuel Retailing and Liquified Petroleum Gases (LPG) which are Business-to-Consumer (B2C) businesses and require a strong distribution network. 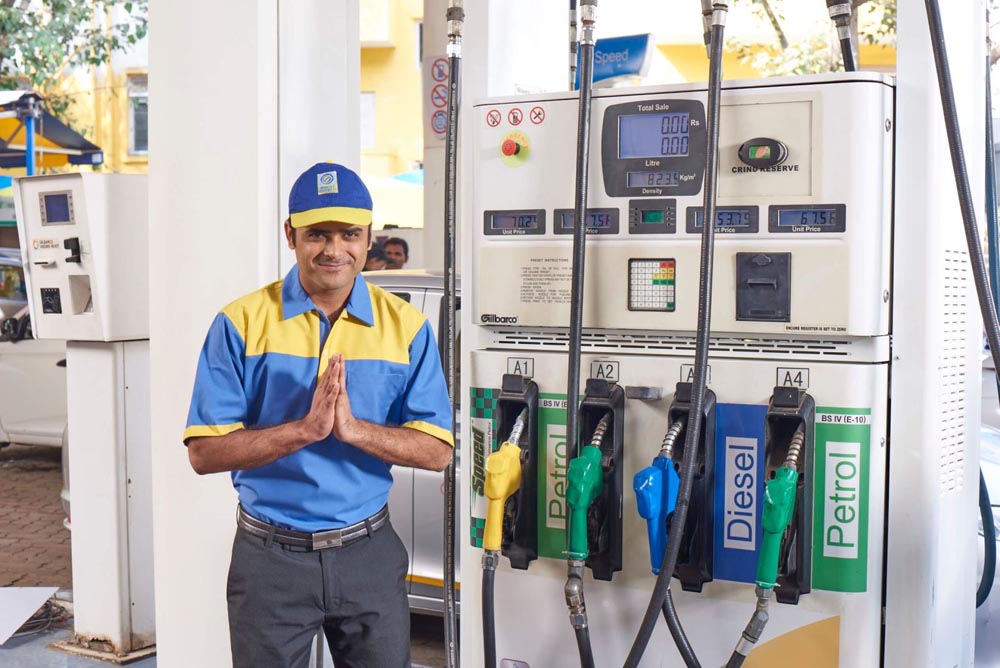 Promotion represents a marketing communication effort that will help in generating awareness as well as attitude towards buying the product or service.

BPCL being a government-owned company and also being in the business for more than 70 years now has developed a very good name and reputation in the industry. Its name sells for itself. It usually used to advertise using offline mediums but now has increased its focus on digital advertising. Also, it has also tied up various brands to offer discounts on its products. 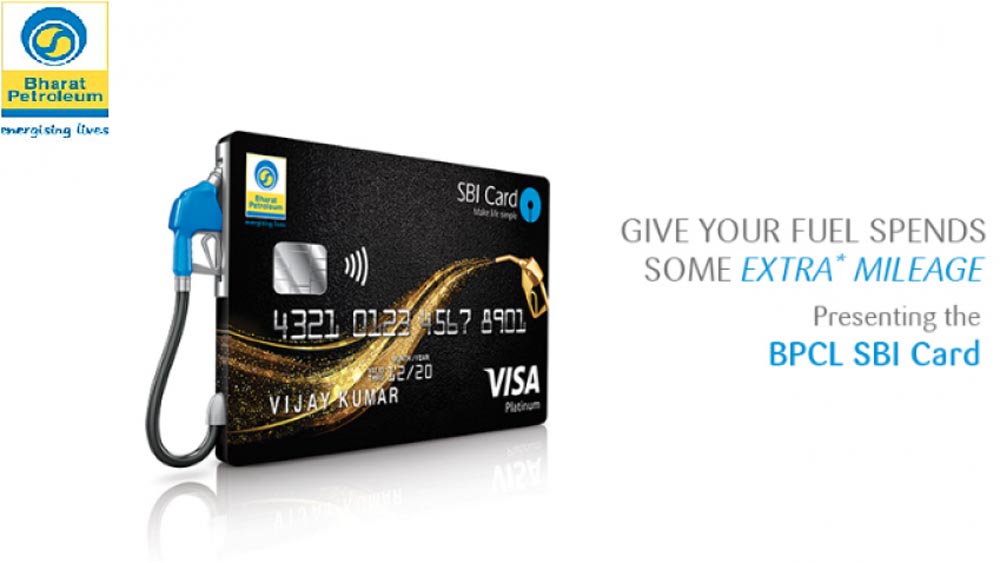 Now that we know a little more about Bharat Petroleum Corporation Ltd, let’s look at the marketing strategies and campaigns it has undertaken to maintain its presence in the eyes of the consumers.

As previously said, BPCL being a government-owned entity and has been in the business for more than 70 years has helped it develop a name for itself. It has lived up to its work commitments for all these years which has made it a trustworthy company in the minds of the consumers.

So, BPCL does not completely focus on promoting its products to general consumers but also promotes its name by undertaking various activities related to Corporate Social Responsibility (CSR).

That being said, let us now go through various advertising campaign activities undertaken by BPCL to keep itself relevant in the minds of the general public.

Marketing and Advertising Campaigns of BPCL

BPCL has regularly come up with various advertising campaigns to improve its visibility among the general masses. Furthermore, it launches campaigns for its different brands and also has signed brand ambassadors to create a strong customer connection. So here are some of the popular campaigns of BPCL.

It focuses on promoting cooking gas and has released a series of cooking and cooking related instructional videos for housewives. This campaign was mainly focused on targeting homemakers and thus promoting its cooking gas.

Go Digital, Go Cashless is a campaign that focuses on promoting digital payments at petrol stations, during the delivery of its LPG gases, etc.

This campaign was also rolled out after the introduction of India’s Digital India policy. Narain Karthikeyan, a popular F1 racer, was signed as an ambassador for the promotion of this campaign.

Under this campaign, the company also started loyalty programs like SmartFleet and Petrocard to build a stronger customer base. 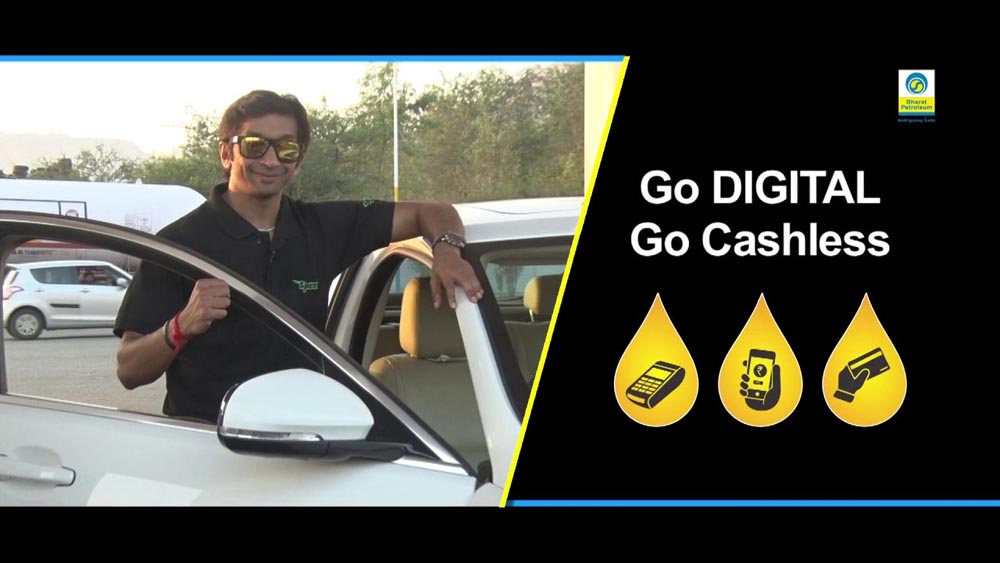 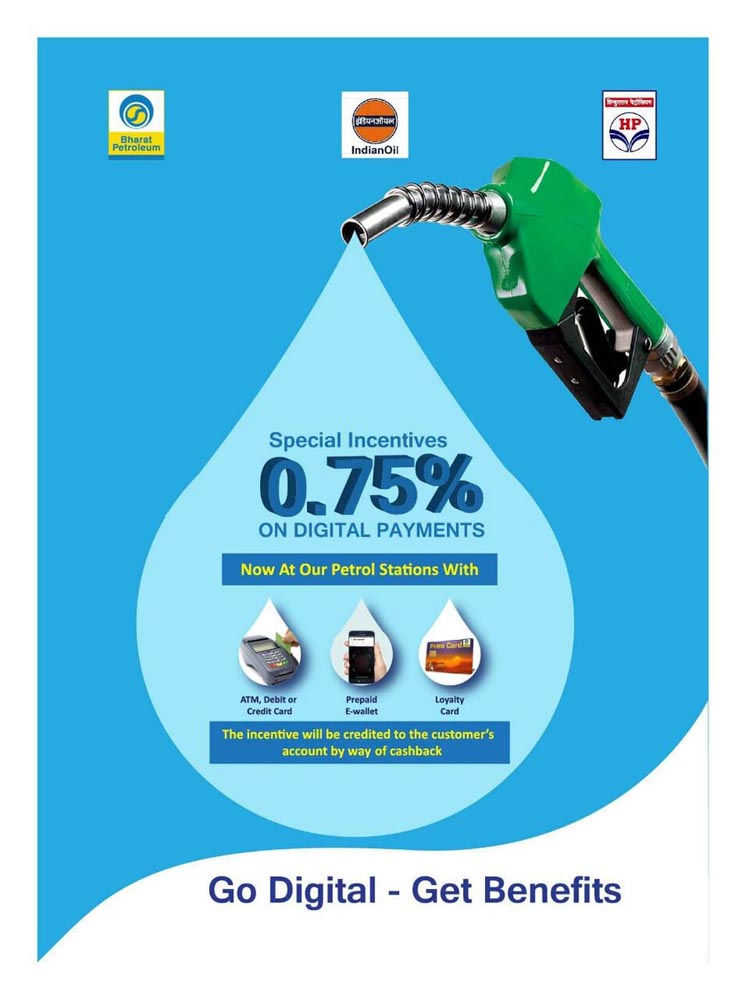 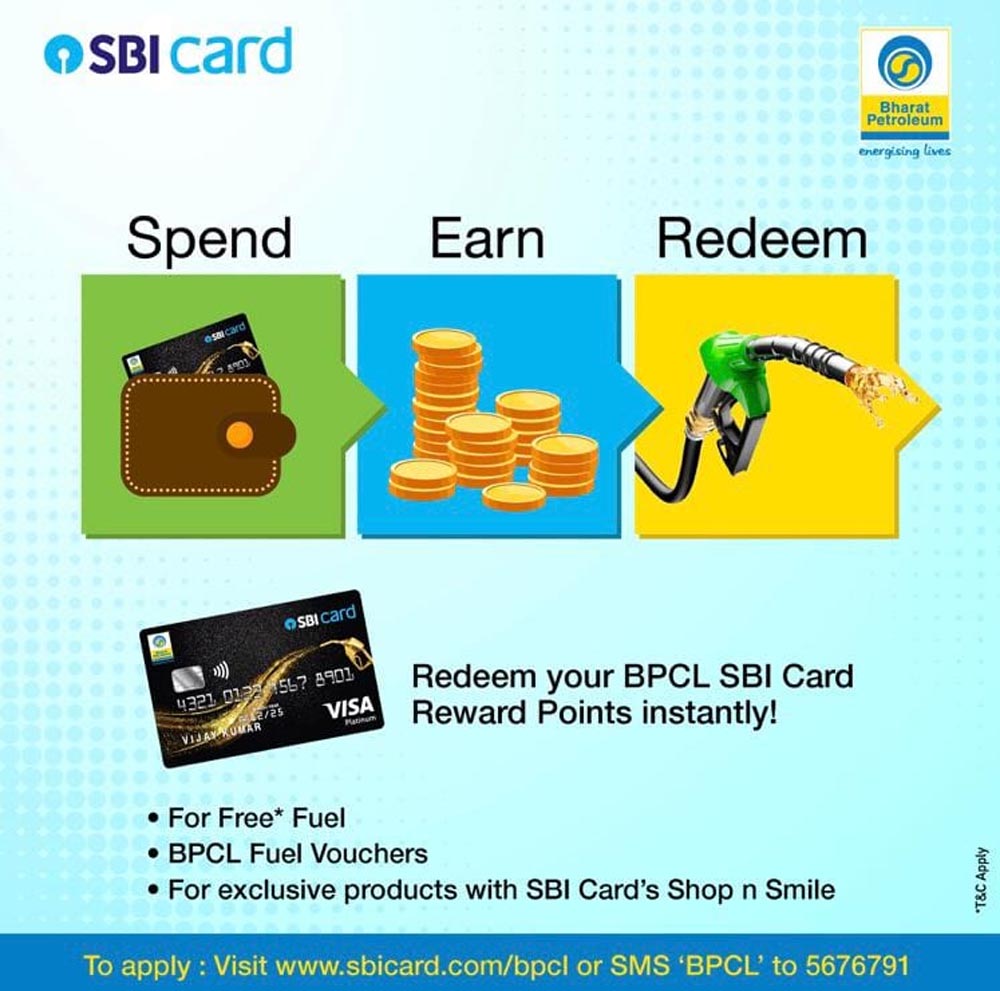 Jaanchein Parkehein Phir Bharein means to examine, understand, and then pay for the fuel. This campaign was launched to make people aware of the quality of its fuel and other services that it offers are among the best in the country. 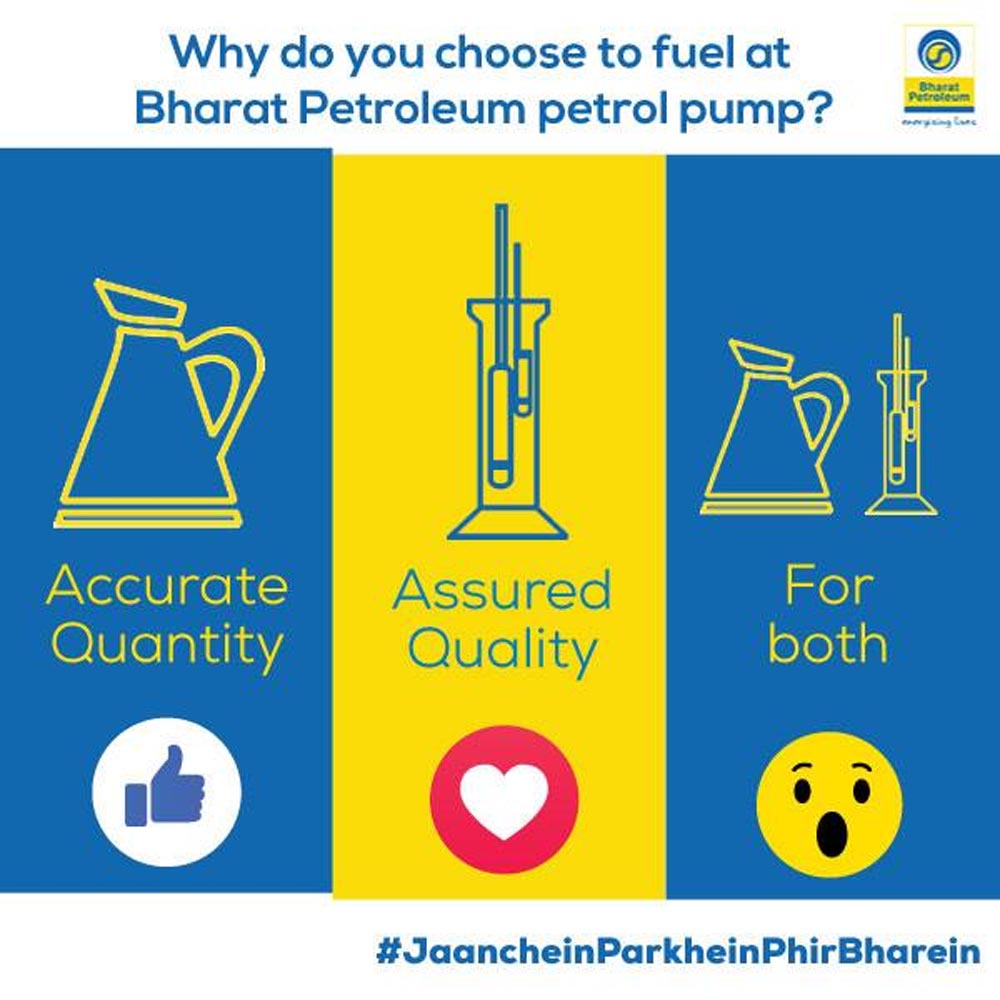 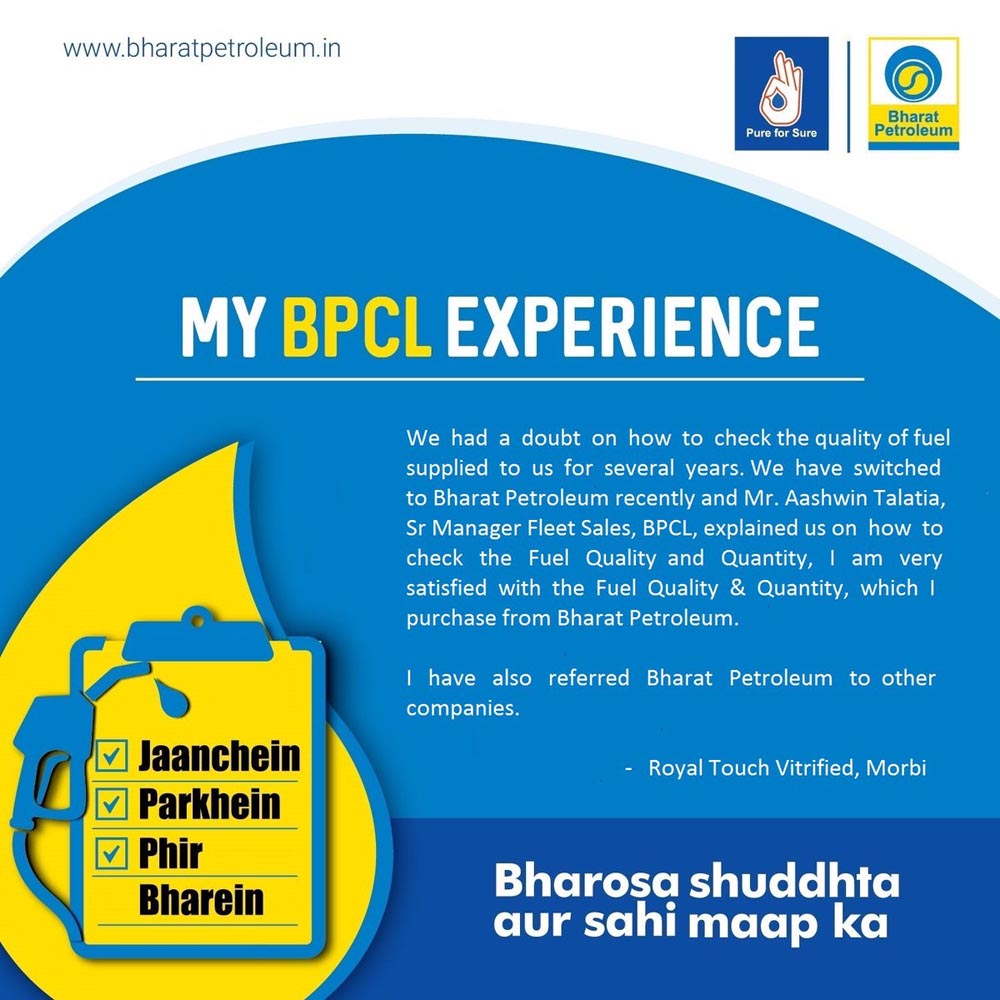 These were some of the popular campaigns released by BPCL to promote its new offerings and services. Let us now understand what it is doing in terms of its digital presence in the next section.

Let us know what BPCL is up to in these aspects by going through its Social Media Presence and Website Overview.

It uses social media to communicate its company announcements, and showcase its new products. It also focuses on showcasing its Corporate Social Media responsibilities and employee testimonials.

It also has another handle on Facebook and Instagram that purely focuses on promoting its fuel stations. We can say that it is currently working on increasing its social media engagements.

BPCL’s website, www.bharatpetroleum.com, is a very well-designed website that has all of the things arranged properly, easy to navigate, and also has a chatbot installed. It also ranks first on the Google search so it’s very well optimized as well.

Recently, BPCL also revamped its website for a better customer experience. The above image showcases that the revamp has worked well and it receives very good overall monthly traffic.

With this, our case study on BPCL has come to a close. So let’s conclude the case study in the next section.

As a company, it believes in being accessible to the public. Its slogan, ‘energizing lives, pure for sure’ showcases a quality service provider that gives light and power to millions in their day-to-day life. It has been doing very well on its business fronts.

However, In this increasingly digital world, BPCL is working on its digital marketing campaigns by being more customer-centric. Although digital marketing is not a new concept in the field of business, it is still on the learning curve to fulfill.

Liked our work? Interested in learning more? Do visit our website for such content.  You can also attend our Free Digital Marketing Masterclass by Karan Shah.

If you found this case study relevant and interesting then please do share it in your circle. Have any thoughts on this case study? Do comment below. Thank You!