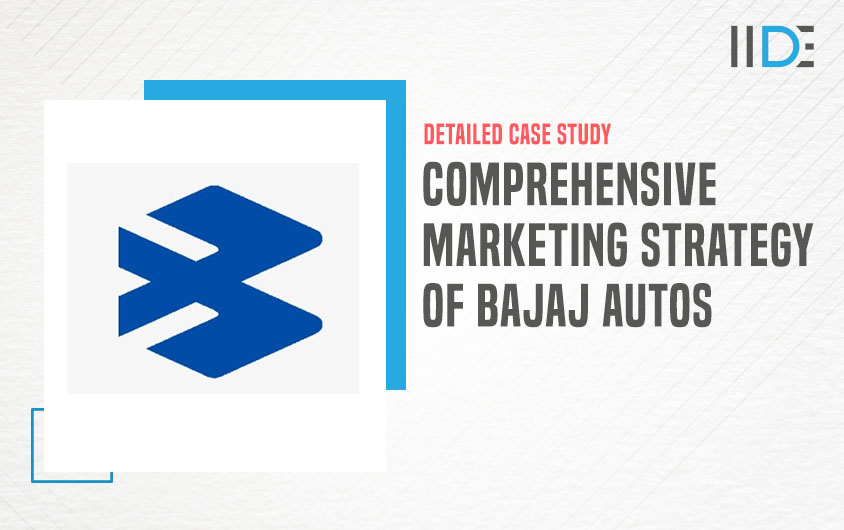 Have you heard about the popular Bajaj Pulsar? If yes, awesome! If not, you’re missing out. So, let’s learn more about the company that designed and produced Bajaj Pulsar, the country’s most popular and affordable, two-wheeler vehicle.

It manufacturers the following:-

It was established in Rajasthan by Jamnala Bajaj in the 1940s. Today, the world’s third-largest manufacturer of motorcycles is Bajaj Auto and the second-largest in India. 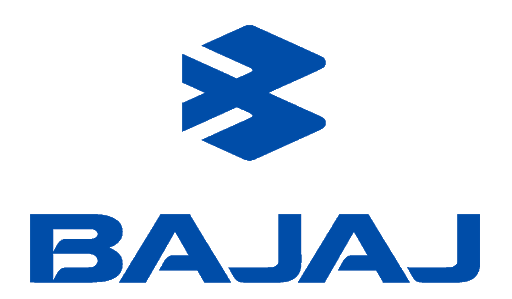 In 1960, it became a public limited company and later in 2008, Bajaj Auto Limited was separated into three corporate entities:

The company has various plants all over the country. They are:-

Bajaj Auto Limited is one of the Bajaj Group’s 25 entities (founded in 1944 by Jamnala Bajaj). They also have a presence in diverse businesses such as Electronics, Life Insurance, General Insurance, financial services, and others.

Let us now dive deep into the marketing mix of Bajaj Auto in the coming section to understand more about the company.

A marketing mix is a collection of factors that a company can control in order to persuade customers to buy its products. Bajaj Auto employs the 4Ps (Product, Price, Place, and Promotion) of the marketing mix in a very strategic manner to get the best out of its offerings.

Let us now examine the marketing mix for Bajaj Auto.

Bajaj Auto produces a diverse number of two and three-wheelers for India and international markets. Exports make 35% of Bajaj Autos’ center total sales and 47% of these exports are made to Africa. Bajaj Boxer is the largest selling model in Africa.

For intra urban commutes Bajaj Auto also showcased the Re60 (Bajaj Quote) which was based on an auto-rickshaw. 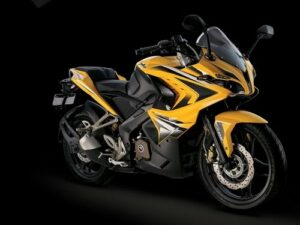 Bajaj Auto also has an extremely competitive pricing strategy in its marketing mix and they believe the key to capturing market share and ensuring brand loyalty is the right pricing of products.

The company has immense knowledge in regards to the market as a whole and knows for a fact that low cost of purchase and well overall Low cost of ownership are key elements to an effective Pricing strategy.

Bajaj Auto features a production capacity of more than 4 million two-wheelers. Its oldest plant is being used as a Research & Development (R&D) center for future product development and in-house technological research.

With operations in more than 50 countries, Bajaj Auto has truly made its presence felt when it comes to the distribution, sale, and service of two-wheelers. 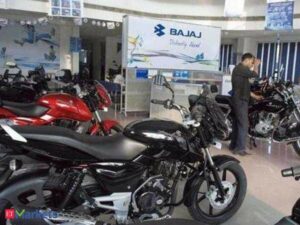 The company sold close to 3.76 million two-wheelers during the financial year 2012-2013 of which approximately 33% consisted of exports. Bajaj auto’s two-wheelers are also known for their low cost of ownership, low spare parts cost as well as easy availability of parts.

With a very adequate penetration of spare part dealers even in rural areas, Bajaj Auto can population-based meet the needs of consumers in even the most remote parts of the country.

As part of its promotional strategy, Bajaj Auto uses print, TV, online, billboards, etc. This makes use of the customers’ changing preferences as a clue for not only new product developments but also newer ways of promotions.

Bajaj Auto made use out of the metal of the now-defunct and decommissioned naval warship for constructing the Bajaj V motorcycle model which made a great impact on the citizens of the country.

We can conclude that Bajaj Auto has poured its heart and soul into every segment of the strategy to maximize its reach and acquire its customer’s trust and loyalty from all around the world.

So this is how Bajaj Auto has framed its marketing mix strategy. Let us now go through its competitors’ analysis.

Let’s take a look at the comparison between Bajaj Auto and Hero MotorCorp in terms of unit sold and employee ratings. In May 2021, Bajaj Auto beat Hero MotoCorp by just 116 units, beating them and emerging as India’s largest two-wheeler maker.

But in terms of employee ratings, Hero MotorCorp takes the lead in many areas: Overall rating career, career opportunities, compensation & benefits, work-life balance, and many more. We can conclude that Hero Motocrop treats its employees better than Bajaj auto does.

Now let us take a look at the total share capital held by Bajaj Auto and its competitors. 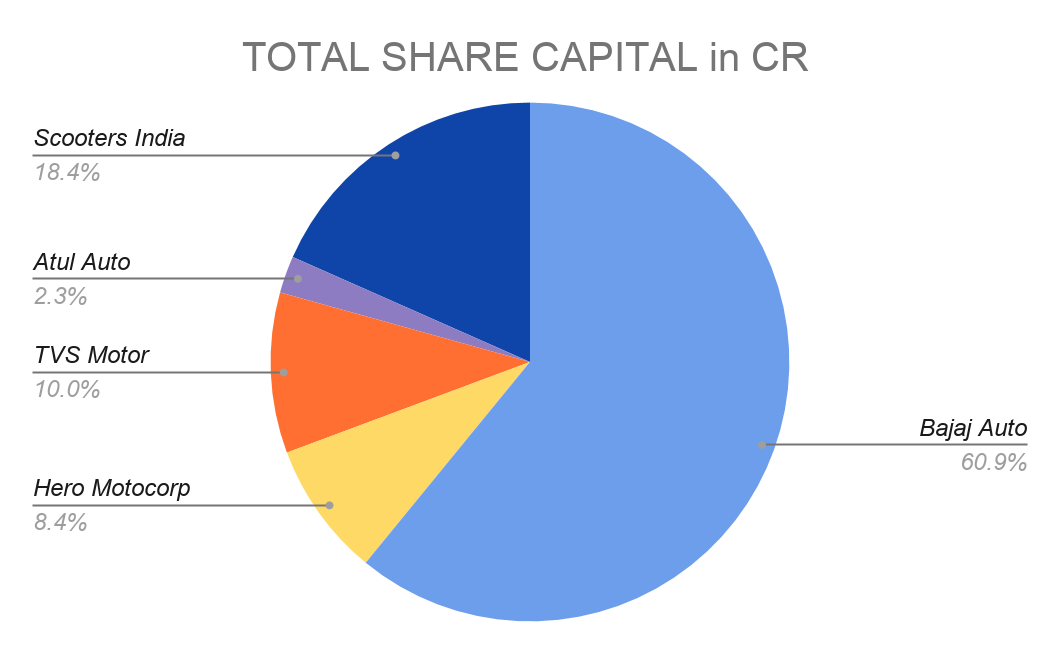 Let’s learn more about the market impact of Bajaj Auto.

With the above points, we can learn that Bajaj Auto has acquired a large segment of the share capital amongst its competitors. This is due to its various marketing campaigns as well as its wide range of products and services that have been accustomed and suited for people of all ages.

Bajaj Auto used marketing strategies as well as their campaigns profusely which helped boost their growth and develop their name as a household brand.

The company divides the population based on characteristics like age, gender, income group, region, family size, price sensitivity, loyalty, personality attributes, and lifestyle.  It employs a combination of demographic and geographic segmentation methods. This is because the distribution of this product is extremely important. In the same way, demographic points like the earnings of the individual also matter.

For Example, Pulsar is one clear such model where it has differentiated itself with its combination of design and power throughout the market. It uses user benefit and a value-based positioning strategy.

Bajaj Auto entrusted the responsibility of communicating their brand value of Pulsar to Ogilvy & Mather.

Ogilvy & Mather is one of the largest marketing communications companies in the world that provides a broad range of marketing services through media campaigns.

Since Pulsar was initially targeted to those within the age group of 18-24. The youth wanted powerful and stylish bikes, which would suit their pockets and give them good mileage. So what O&M needed to do was attract the attention of the youth, and since the target market was very niche. Hence they came up with the punchline “DEFINITELY MALE” which fired the youth’s imagination.

It was very novel for O&M to come up with the idea of associating a motorbike with gender. This project later became an unquestionable success and Bajaj started increasing the breadth of its target audience.

So, this is how Bajaj Auto handles strategies for its marketing. Now, let’s look into the marketing campaigns led by Bajaj Auto.

In 1986 Bajaj Auto engaged with Kawasaki for the sale and after-sales service of Kawasaki motorcycles through its pro biking population-based, a premium bike dealership network, since 2009. Vidya Balan was hired by the firm to promote the Kawasaki line of vehicles in an ad campaign. 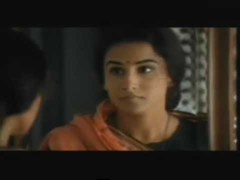 The one-and-a-half-minute-long ad film catered to a mass audience signifying the strong relationships that subtly center integrated the vehicle as an accelerator to strengthen the bonds.

Later in 2009, an Ogilvy team led by Piyush Pandey created the ‘The Fastest Indian’ positioning for Bajaj Pulsar’s youth-oriented versions. It was Bajaj Auto’s first 360-degree digital campaign, which encompassed all digital touchpoints in addition to traditional media channels. 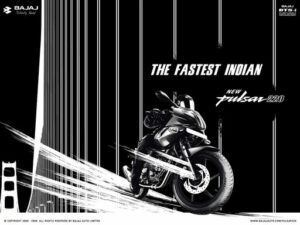 Now let’s dwell on Bajaj Auto’s media presence and its unique Instagram feed that focuses on the stories of their customers.

Let us take a look at the Instagram presence of Bajaj Auto and its competitors. Having a presence is very crucial at this time as around 326.1 million people in India alone use social media.

Bajaj Auto has around 18.6k followers on Instagram with 26 posts. With only an 8% engagement rate it appears that Bajaj auto isn’t active on Instagram but has more engagement when compared to its competitors. 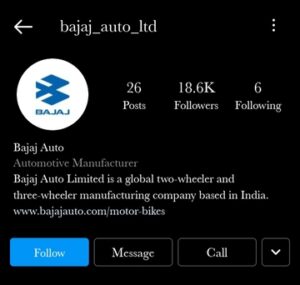 Now in the case of TVs Motor company it has around 70.8k followers and 687 posts but with only a 2% engagement rate. Although they are active their reach as well as their engagement rate is low. 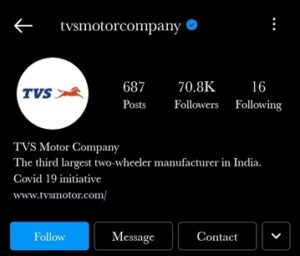 “Couples who ride together, stay together” was a quote published by the Bajaj Auto social media team. We can say that Bajaj focuses on couples too when designing and manufacturing their motorcycles, as they are not only spacious, comfortable but economical too as it’s easily accessible by both.

We can also see that Bajaj Auto pays close attention to the accomplishments made by their customers. This post talks about @candidlouis who completed a solo road trip from Bangalore to Australia by driving across 100 countries.

Bajaj Auto posts content that deals with their customers and success stories. It’s mostly related to their customers’ stories, interactions, best moments, and many more that mainly deal with the brand motto which is “Hamara Bajaj”.

These are some of the proofs to show that Bajaj Auto is active in social media and the marketing world.

With this we have come to the end of the comprehensive case study, let us now go through the final points in the final section.

In the end, we can conclude that Bajaj Auto has grown considerably in the last few decades. From being a private limited company that only dealt with imports and exports of motorcycles to being the third largest manufacturer of two-wheelers around the globe, and the second-largest two-wheeler manufacturer in India.

They also focus on affordability in ownership of their motorcycles as well as cost-effective spare parts and maintenance. They focus a lot on their customers and value their feedback, allowing them to grow and provide better products and services.

Bajaj auto holds a large capital share in the market amongst its competitors. They strive to be in touch with all age groups and design and manufactures two and three-wheelers to suit everyone’s needs.

Thank you all for taking the time to look into my blog. If you enjoyed or learned anything new be sure to share it amongst your family, friends, and even peers.

Be sure to take a minute to comment on your views on the topic and suggest new topics that you would like to read and learn about.