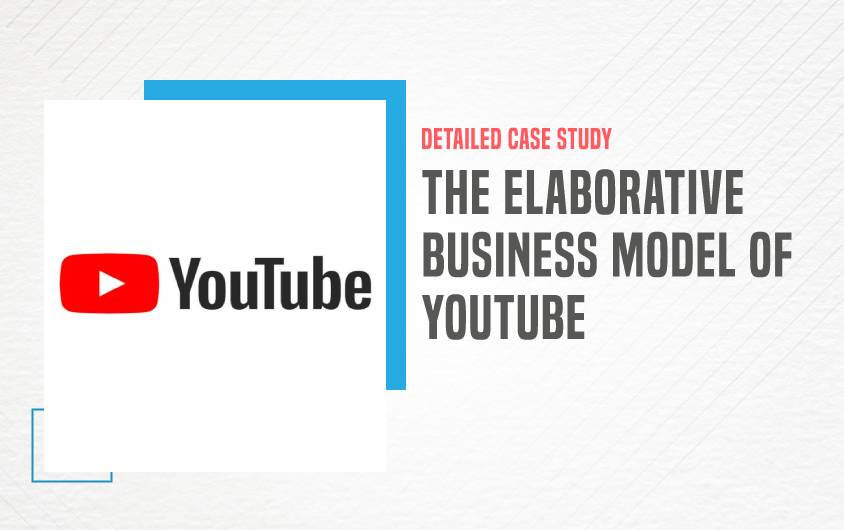 In this in-depth case study, we will deal with the business model of Youtube mainly focusing on its target audience, product variants, and market share.

Youtube came into the market decades back and they change the entertainment industry by its fabulous business model, marketing strategy, and brand positioning. Youtube marketed itself as a free video publishing & viewing tool, and through that, they generate billions of revenue. Youtube has marketed itself because it has a huge audience and expanded its global market. So let’s get started by knowing a bit more about Youtube.

From a small video streaming platform to a large service with record revenue of 19.8 billion dollars in 2020  youtube came a long way through its extraordinary business model.

In February 2005, In America, Youtube is founded by Steve Chen, Chad Hurley, and Jawed Karim. In October 2006 youtube is bought by Google and after that, there is no turn back for youtube.

Let’s learn about the business model of youtube in the coming section.

A business model explains how an organization creates, delivers, and captures value in economic, social, cultural, or other contexts. Business model construction and modification are also known as business model innovation, and it is a component of business strategy. Let’s take a closer look at it.

In India, approximately 16% of India’s population is using youtube daily. There are almost 265 million monthly active users on youtube.

Time to find out about their products and services in detail.

Take a look at the younger audience, Google also has a separate YouTube Kids app. This is a curated way for kids to surf videos on youtube kids that are made only for the younger audience, with some extra parental controls, by that their parents can control their surfing in this app. It’s not a separate service; it’s more of a restricted version of the same service.

Youtube music is the latest product of youtube, launched in June 2018, after Google play music was discontinued, google launch its new music platform, to break into the music streaming business.

Youtube Music allows users to watch music from a large library of songs and albums, as well as music videos, and users can create and manage their playlists. While Youtube Music can be accessed in an ad-supported version for free, you can get the real benefits when you took the premium versions of youtube by paying them.

Youtube Red is renamed Youtube Premium when Youtube Music Launched in June 2018, it’s not a different platform from youtube, it’s a paid version of youtube where you will no get to see any ad or any video break.  With a Premium subscription, individuals can listen to the audio of any YouTube video in the background. In an addition, You can download and watch videos offline.

Time to find out Youtube’s pricing list for every service they are giving.

YouTube Premium is the road for its others premium, ad-free services. If you take YouTube Premium, you can listen to ad-free music on YouTube Music, and also your kids will watch ad-free videos in their youtube kids app.

This is the price strategy led out by YouTube. So let’s explore the target audience of the company.

YouTube has something for everyone, with over 300 hours of video uploaded every minute. While it attracts an equal number of men and women, YouTube is still extensively dominated by men. Men spend 44 percent more time on the site per month than women, and men account for 90 percent of the 51 categories of YouTube material examined by OpenSlate. If you’re looking to debunk stereotypes, YouTube isn’t the place to be. Women are interested in makeup and skincare, whereas men are interested in sports and gaming. Dogs — well, and East Asian music — bridge the gender gap.

This concludes the case study of YouTube’s business model. So, let’s wrap the findings below.

YouTube, if there is one company that understands what it takes to be at the top of the video streaming platform results, is it. Why? Because they are aware of how people search for products and services online.

Youtube is honing their digital marketing strategy to ensure that they are at the forefront of digital marketing and giving shoppers what they want, easily and quickly. Youtube, which has also established itself as the second most visited website in the world, should continue to create more interesting content and implement it in the best way possible if it is to remain as competitive as it is now.

Did you enjoy our work? Do you want to learn more? You can also digitally upskill yourself by attending IIDE’s Free Live Digital Marketing Masterclass every week.

If you found this case study useful and interesting, please spread the word.  Please leave a comment below. Thank you very much!