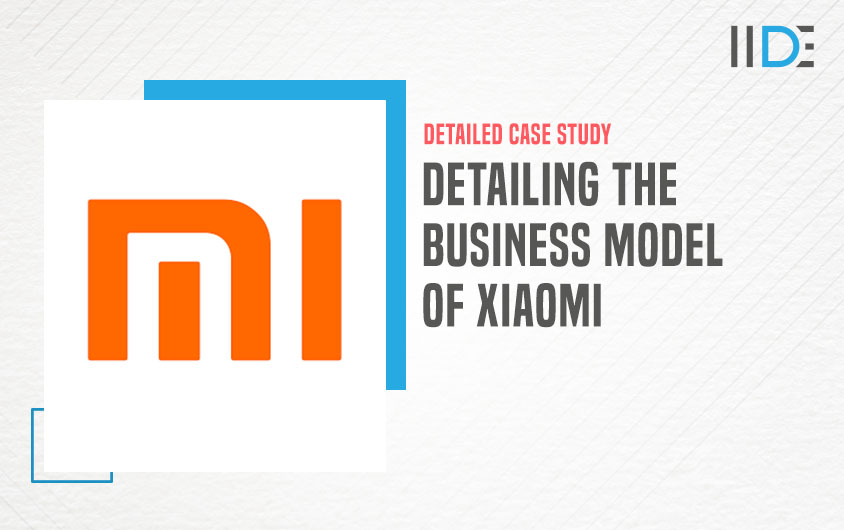 Xiaomi’s growth has come to characterize the new consumer electronics paradigm in India. Smartphones and wearables are owned by a large percentage of the population, distinguishing them from the mainstream market.

Xiaomi’s business model has taken off not only as a result of its low-cost models and high-quality services but also as a result of strategic actions that have paid off over time. What is Xiaomi’s secret sauce, then? Let’s learn about it in this case study.

Now let’s have a basic understanding of the Xiaomi company.

Xiaomi is a Chinese electronics business founded in 2010 by Lei Jun and located in Beijing. After Apple, Samsung, and Huawei, it is currently one of the top four smartphone makers in the world.

The company was founded in 2010 as a start-up to develop mobile devices, and in the Chinese market, it released MIUI, an innovative Android-based operating system. It now creates and manufactures high-end smartphones, cell phones, laptops, household appliances, and a variety of other items.

The smartphone made its debut in the Indian subcontinent in 2014, after only three years on the market, earning the title of “India’s No.1 smartphone brand.”

Xiaomi has been a publicly traded company on the Hong Kong Stock Exchange since 2018 and has several subsidiaries. In 2019, it was also the youngest firm to be included in the Fortune Global 500 list.

Xiaomi’s business model is so robust that it was able to turn around a completely negative situation in less than a year.  After 2017, the industry in India took a huge leap forward. Xiaomi’s Chief Executive Officer, Lei Jun, divided the market into three divisions for revenue-generating.

Let’s explore it deeply. Let’s now look at its target market in the next part.

Xiaomi’s brand marketing strategies are currently targeted toward bridging the gap between the mass market and also the high-end segment of the market. Over the years, it enhanced its product portfolio and now offers an outsized direct, not just the smartphone category but also in various other categories.

Now that you just understood easily the concept of what Xiaomi offers and who it targets. Let’s take the next step on its products and services.

Products and Services of Xiaomi

Xiaomi started as a self-funded company. It used to be in the hardware sales business. Additionally, the business used to provide internet services. It has made a substantial profit from these services, enough to provide a solid foundation for a large firm.

It has always had a distinct strategy. The company has kept a narrow profit margin on its hardware items from its inception. Previously, the majority of the profit came from internet services.

Xiaomi sells more than 150 different sorts of products. They sell everything from chargers to air purifiers to bags to televisions. Xiaomi also offers cloud storage, which requires a paid membership.

Online gaming and TV shows are also available through Xiaomi’s services. It’s one-of-a-kind business strategy includes several actions. In addition, the firm invested in many small enterprises. The business model of the company comprises a wide range of products, services, and entrepreneurial support.

It also sells things that are reasonably priced. This promotes the popularity of its specialized products among its target market. They provide the best items and customer service. The website sells Bluetooth speakers, air fryers, rice cookers, and a variety of other items.

The products are always of high quality. Xiaomi’s Mi home is a different site where you can find these innovative and cost-effective products. The business approach is likewise distinguished by these creative and original goods. Let’s take a look at how Xiaomi’s business model has evolved.

Xiaomi’s business model is to blame for the company’s quick rise to prominence. The company’s ability to maintain a solid hold on business is aided by the increasing saturation of the home market. It gives overseas customers a great impression.

It made a $4 billion investment in China’s partner ecosystem. They also intended to invest an additional $1 billion in companies. The company is growing in terms of versatility and investment.

In addition, the corporation was successful in establishing India’s largest market. Xiaomi’s model continues to incorporate new ideas and developments. The firm also made investments in Swedish Homewood and other businesses.

Now we found how Xiaomi promotes its products, let’s find its marketing strategies to know about its position in the market.

A company that wants to enhance its image in the eyes of customers in today’s explosive information technology era cannot fail to apply marketing strategies.

From the very beginning, Xiaomi has attempted to avoid wasting its costs by reducing marketing spends. From having simple advertising strategies to unique ideas and memorable campaigns, Xiaomi has succeeded in making its marketing extremely unique and personal.

With rising competition within the market further as changing customer behaviors, the company has begun to focus on its marketing efforts by increasing its marketing spends year on year.

With that being said, allow us to involve a variety of the common likewise as unique marketing measures employed by Xiaomi to keep up its relevance within the market. Let’s take a look at the marketing campaigns of Xiaomi below.

A Marketing Campaign of Redmi India – This is #SonuKiSuno

The campaign revolves around demonstrating how the fundamental elements of life must be considered when purchasing a smartphone, and thus how Redmi provides these necessary features that are useful in day-to-day life.

Xiaomi launched a lot of the latest advertising campaigns and unique ideas for its Redmi Note series over the past few years. The advertising promotions on social media also feature Ranveer Singh, showcasing the ability of Redmi Smartphones. All the rounds of advertisements highlight what value these devices offer to customers. Xiaomi has done various campaigns for its products over the years through a ramification of mediums like Newspapers, Television, Social Media Advertising additionally to getting products reviewed from Youtubers. Let’s tear it down and understand the promotion strategy of Xiaomi.

Each company has its promotional campaigns.  However, whether the campaign has a small or large impact on customers, they will certainly leave lessons and experiences for the next campaigns and events.

In its starting years, Xiaomi relied little on marketing. But now, it’s shifted to a more active approach in promotional activities because it focuses on key regions similar to the US and Europe, India moreover as China itself.

Xiaomi’s promotion strategy changed dramatically around 2016. the corporation realized that it needed to expand beyond just selling its products and commenced focusing specifically on India and China — two countries with large populations but a limited income.

With this, the business model concludes. So let’s finish it with a summary.

As mentioned above, digital marketing plays an important role in the success of businesses because it is seen as a link that helps users connect with the company

Xiaomi could be a superb example of how a start-up business made it big. Overall, the Xiaomi business model is one of the most efficient, profitable, and inspiring business models for new-age firms that want to maximize their presence, growth, and sales by leveraging the latest technology and the power of the digital world.

Let us know your thoughts on this case study within the comment section down below. Thanks for reading, and if you liked our then do share this in your circle. If you want to learn about digital marketing, try IIDE’s free basics on Digital Marketing Masterclass.