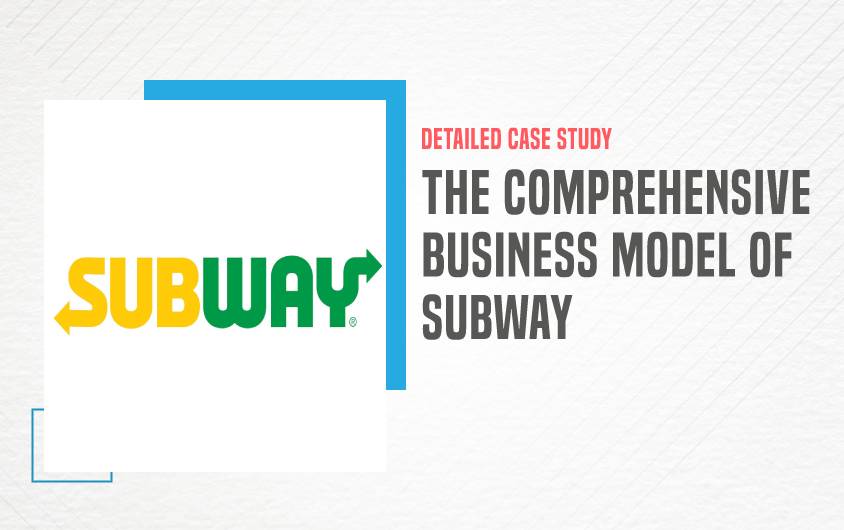 Subway has been one of the leading food chains for many years in the highly competitive fast-food industry. So if you are looking to learn the secrets behind the success of the Business Model of Subway, you are in the right place!

In today’s world, Subway is the leader not only in sales volumes but also in profit rates and marketing strategy. But how did Subway manage to earn such the first position? The answer lies in its strategic marketing as well as other factors.

Hence in this case study, we’ll dig deeper into the business model of Subway and explore its marketing strategy, marketing mix, and marketing campaigns.

So, let us start by learning a bit more about Subway as a company.

The Subway tale began more than 50 years ago when physicist Dr. Peter Buck altered the life of a university student with a few simple words: “Let’s open a snack shop”. Milford, Connecticut is the company’s headquarters. Fred Deluca and Peter Buck founded the company in 1965 as a culinary restaurant.

Subway provides a wide range of menu items, as well as drinks and other merchandise, to its customers. Because Subway is a franchise-based company, it shares ownership of the company with its franchisees, who then operate Subway in specific areas.

Doctor’s Associates runs and operates Subway in India. An Indian franchisee opened the first Subway restaurant in Saket, New Delhi, in 2001, and the company now has 590+ franchise-operated restaurants in 70 Indian cities.

Now that we had an overview of the company. Let’s get started with exploring the business model of Subway.

Subway is the world’s largest fast-food chain with the most number of retail locations opened across the world, taking over the long-time champion McDonald’s. The business model of Subway is similar to many other fast-food chains, i.e., expanding to different geo-locations through franchising deals. Yet Subway stands apart from the competition by providing relatively healthier food choices and the unique – create your sandwich from scratch – option to it’s customers, making them feel completely in control of their food experience.

Let us explore in-depth the business model fo Subway by learning more about its marketing mix.

TheMarketign Mix is made up of 4Ps – Product, Price, Place, and Promotion. So let us start exploring the four different aspects of the marketing mix in order to gain better insights into the business model of Subway.

Sandwiches, breakfast goods, soft drinks, cookies, and other fast-food products are commonly sold. Subway’s menu is well-known around the world for catering to local preferences and tastes. Subway is constantly improving its products and services based on current customer tastes and preferences.

Subway’s pricing approach has always been to provide meals at a reasonable/affordable cost. And this is why it has been so successful throughout the years. This has also aided Subway in establishing itself as the world’s second-largest fast-food restaurant chain behind McDonald’s.

Subway began selling discounts and combos to boost profits during the recession. And these gifts were well-received throughout the world.

With over 41,600 locations globally, Subway is the world’s second-largest quick-service restaurant (QSR). Subway stores come in a variety of configurations, including drive-thru, online ordering, and meal delivery. Customers could acquire their favourite cuisine at a specific time or location using these forms. They also have a format for sitting arrangements in their stores, which can be either outdoor or indoor seating.

Subway employs a variety of marketing strategies to increase brand loyalty and customer interest. Subway promotes its brand in the same way that McDonald’s does.

Since its debut, Subway has been known for providing fresh and nutritious MTO (Made To Order) vegetable cuisine. Subway became a global fast-food business by serving hygienic fast food items, providing good customer service, and expanding its stores.

As a result, Subway promotes their products and frequently uses the phrase “Eat Fresh” to emphasize the freshness and high-quality food they provide.

Subway has always kept lowkey in regards to their marketing strategy, relying more on word of mouth and banner advertisements for showcasing their presence in a new neighbourhood.

This is the marketing strategy featured by the company Subway. Let’s have a look at the tactics handled by Subway for grasping the customers.

Subway has also managed to successfully cater to both fast-food fans and health-conscious clients. Subway assured that their product offers are following these expectations, based on the belief that customers appreciate value, taste, and health. They were able to place first in three criteria, considerably ahead of their competitors.

They also started a national campaign to combat childhood obesity (F. R. E. S. H. Steps Childhood Obesity Prevention). This was accomplished by emphasizing their position as the healthier option in the fast-food industry by including healthy options on their menus.

Subway is one of the most well-known fast-food restaurants in the world. Subway has undeniably had a significant impact on today’s society in terms of food. Subway offers a variety of topping options, allowing customers to customize their sandwiches with the toppings they like.

Did you enjoy our work? Do you want to learn more? If you’re interested in learning more about the future of marketing – digital marketing, the CEO & founder of IIDE, Karan Shah, has curated a FREE MasterClass on Digital Marketing just for curious folks like you!

Thank you for taking the time to read this. I hope you enjoy it. Please share your opinions on this case study with us.