Bank of Baroda: Banking on the Digital Strategy, A Marketing Case Study

The Indian banking sector is growing at a faster rate and among all the Indian banks, Bank Of Baroda is one of the predominant public sector banks that is known for passing on the smartest banking solutions to their customers.

Bank of Baroda is one of the oldest banks in India. It has been growing consistently for over a decade now. How the bank has utilized marketing strategies and implemented them to stay powerful is something worth going through.

Today, in the Bank of Baroda case study, we shall discuss various aspects of Bank of Baroda’s marketing outlook by going through the 4Ps and 7Ps of the marketing mix, its approach towards the market by understanding its marketing strategies and campaigns, both digital and offline, along with a competitor analysis.

About Bank of Baroda

Bank of Baroda is an Indian multinational banking corporation established in 1908, making it one of the oldest banks in the country. The headquarters of the bank are located in Vadodara, India. It’s headed by Sanjiv Chadha, who is CEO of the company.

In 2018, Bank of Baroda merged with Vijaya Bank and Dena Bank, which made it the country’s third-largest public sector bank.

Bank of Baroda is a listed entity on NSE and BSE in India.

Now that you know a little bit about the company, let us understand it further by studying its marketing mix.

Marketing Mix of Bank of Baroda

Marketing Mix is a model that outlines a company’s business on the parameters of Product, Price, Place, Promotion, People, Process, and Physical Evidence. This model also helps in understanding the steps undertaken by the company towards its existing and potential customers. Let us see how Bank of Baroda has lined up its product offerings on the marketing mix framework.

Products Strategy of Bank of Baroda

Bank of Baroda offers a variety of banking products and services to its customers. Here are a few offerings of the bank:

The above-mentioned are a few of the bank’s major product and service offerings, among many other services that help them serve their customers better.

Price Strategy of Bank of Baroda

The price here refers to the interest rates and other prices that the bank is charging its customers.

Place Strategy of Bank of Baroda

The location of the store, office or any other place where the business is transacted is referred to as place.

Placing is important with regards to popularity. Bank of Baroda has its branches spread across all locations of the country.

It has a strong presence in the domestic market and serves a customer base of close to 130 million individuals.

Promotion Strategy of Bank of Baroda

Promotion refers to the communication of marketing strategies like advertising and public relations.

Bank of Baroda uses a mix of various mediums to communicate with its customers. The bank promotes its services through the internet, newspapers, magazines, and on television through advertisements.

Recently it also omitted all the internet transaction charges incurred by its customers to promote digital transactions for 3 months. It also partners with various other companies to give out discounts, cashback, etc. 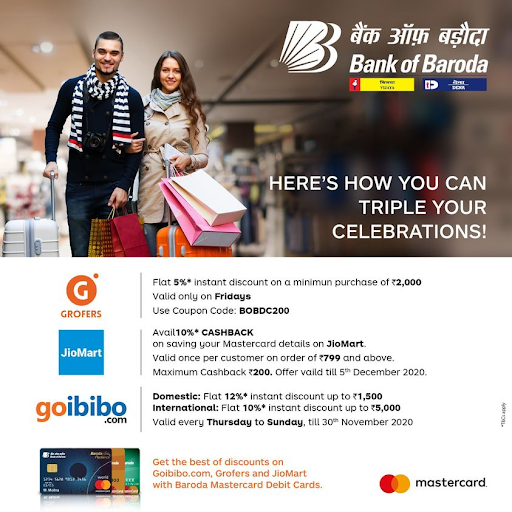 These are the few routes through which Bank of Baroda promotes its products and services.

People Strategy of Bank of Baroda

People parameter, in simple terms, refers to the employees, staff, agents of the company.

Bank of Baroda employs close to 1 Lakh people that help them in conducting the operations of the bank. Having such a number of human resources is enough to fulfill the criteria of People in the marketing mix. The people parameter highlights that the higher the number of employees employed, the easier it would be for the customer to believe and trust in the brand.

Process Part of Bank of Baroda

Process refers to the procedures and steps involved while buying or availing a product or service.

In the process part, Bank of Baroda has almost similar offerings procedure as compared to its government-owned peers like State Bank of India and Punjab National Bank.

However, the bank is trying to improve its procedures by using digital technologies but at the same time, even its public sector banking competitors are more or less working on the same.

Physical evidence refers to anything tangible in nature such as, in Bank of Baroda’s case, its ATM cards, ATM branches, bank branches. They all fall under the umbrella of Physical Evidence. 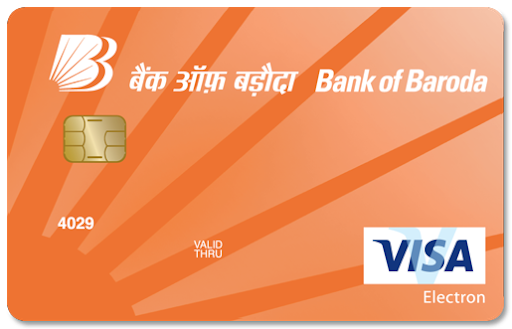 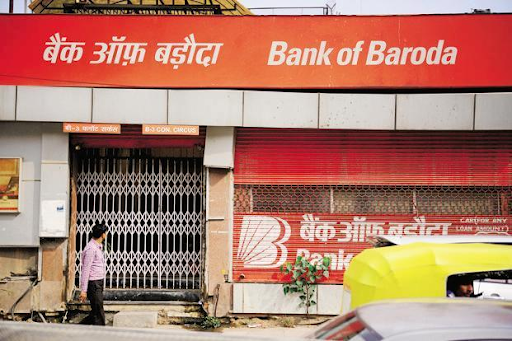 The factor of Physical Evidence is similar to that of the People parameter. It helps customers in developing trust over the bank.

Now that we know a little more about the bank, its products, and services, let us now understand the measures it has undertaken to promote itself and its offerings.

Marketing Strategy of Bank of Baroda

What is a marketing strategy? It is a long-term plan of what ought to be done to make a product or service desirable and competitive in the market. In this section of the Bank of Baroda case study, we will be discussing their various marketing strategies.

Bank of Baroda’s Head of Marketing and Branding, Rakesh Sharma, had said that the digital world is making the markets even more popular and exclusive.  He believes that large-scale data analysis can help the bank gain rich insights into customer behaviour and competition which will help in devising new marketing strategies accordingly.

The company has since then focused upon aggressive marketing of its digital products via digital and offline mediums. It has also signed PV Sindhu, the popular Indian badminton player, as its brand ambassador. With that being said, let us go through the marketing campaigns and strategies implemented by Bank Baroda to attract and retain its customers.

In this segment of the Bank of Baroda Case Study, we shall discuss some of its most popular and recent campaigns. 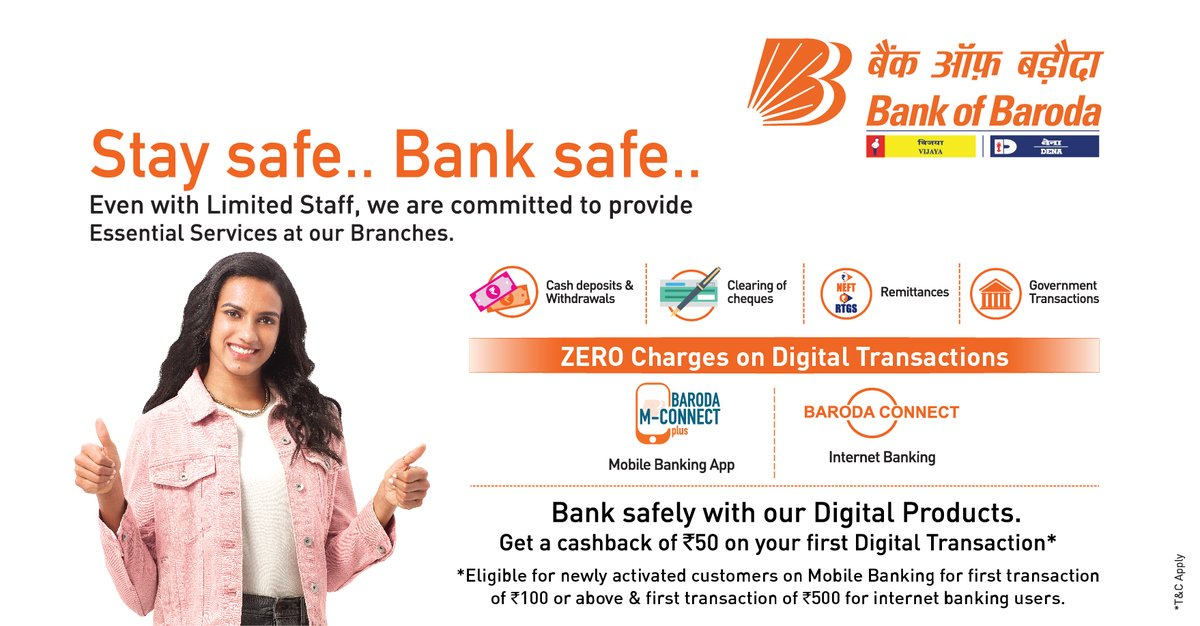 Bank of Baroda’s very recent campaign is based on encouraging its customers to stay safe given the Covid-19 pandemic.

Along with that, it showcased various measures to keep ourselves safe from online frauds and scams. It also focused on encouraging digitalisation among its customers. 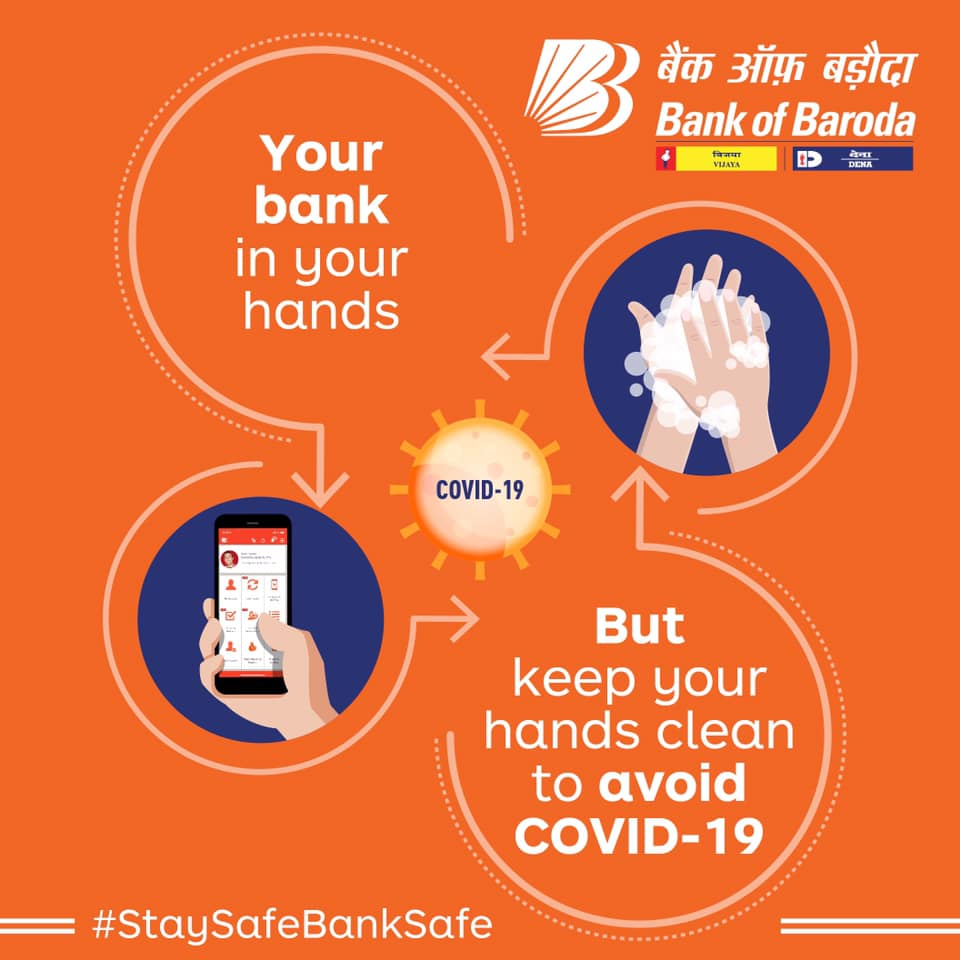 It has rolled out various similar video advertisements in multiple languages through social media to protect and safeguard its customer’s interests.

Power Of 3 – A Marketing Campaign of Bank of Baroda

Power of 3 campaign was launched after the merger of Bank of Baroda with Vijaya Bank and Dena Bank. This campaign focused on showcasing that the core strength of the bank has increased after the merger and that it is also future-ready. It was a very different campaign compared to its other campaigns as the bank took a totally different approach.

It had used children to break the perception that Bank of Baroda being a public sector bank is meant only for the elder class. These advertisements were rolled out in all the major regional languages. Ek Forever Rishta – A Marketing Campaign of Bank of Baroda

Ek Forever Rishta is the current campaign of Bank of Baroda. This campaign focuses on wishing its customers a New Year filled with hope, joy, and optimism. The campaign is designed to create brand awareness among the bank’s target audience, by promoting the products and services that it offers. It has released many such advertisements in 10 different languages. 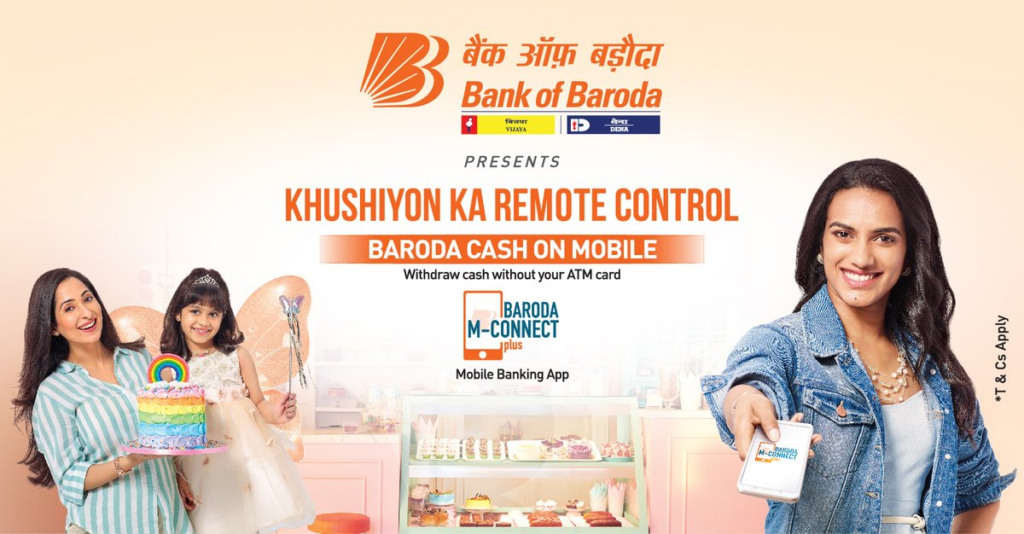 Bank of Baroda had announced that it will not charge any fees on digital transactions for three months. To promote the announcement, Khushiyon Ka Remote Control campaign was launched. This campaign, unlike its previous campaigns, also focused on encouraging digitalisation among its customers.

The advertisements under this campaign were released in 10 different languages to raise awareness among its audiences all over India.

Now that we have seen how Bank of Baroda is aggressively focusing on promoting digitalization through its marketing campaigns. Let us now go through its digital presence.

Digital Presence of Bank of Baroda

As previously said, Bank of Baroda is constantly focusing on increasing its digital presence. With social media becoming an increasingly important mode of communication and marketing, in this section, we would go through how it is working out its social media marketing strategies on various social media platforms.

All of their social media content is similar across platforms.  Currently, Bank of Baroda has been working on its social media strategy very well. Although it has fewer followers in general, the bank is posting relevant content to keep its customers up to date with all of its communication.

Let us now go through what its competitors are doing in the next section.

Competitor Analysis of Bank of Baroda

In the banking industry, there are two different banking sectors. There are private banks like HDFC Bank, Kotak Mahindra Bank, ICICI Bank, etc that fall under the private sector category and then there are public sector banks like State Bank of India, Punjab National Bank, Bank of Baroda, etc which are government-owned entities.

Private players in the industry offer very good banking infrastructure both online and offline. But in the case of public sector banks, they are currently working on matching the infrastructural standards set by private players.

Currently, all the public sector banks are working on increasing their infrastructure capabilities on the online and offline fronts. Once things improve in the future, public sector banks including Bank of Baroda will be able to take on their private-sector competitors on fair and equitable grounds.

With this, our case study on Bank of Baroda comes to an end, let’s conclude this blog with a quick summary.

Rooted in antiquity, the bank has been an agent of economic development and prosperity in India. To conclude the Bank of Baroda case study, we’d like to say that the company has clearly established itself as a strong regional player with a national footprint by offering wide-ranging financial products and services in the industry.

With its merger with Dena Bank and Vijaya Bank along with the competitive pricing that it offers in the industry and its increased concentration on digital presence, the bank is on the right path. But only time will tell how things unfold in the future.

Let us know your thoughts on this case study in the comments section down below. Thank you for reading, and if you liked our content, do share it!