AirAsia- The Marketing Strategy behind the Company’s Soaring Success 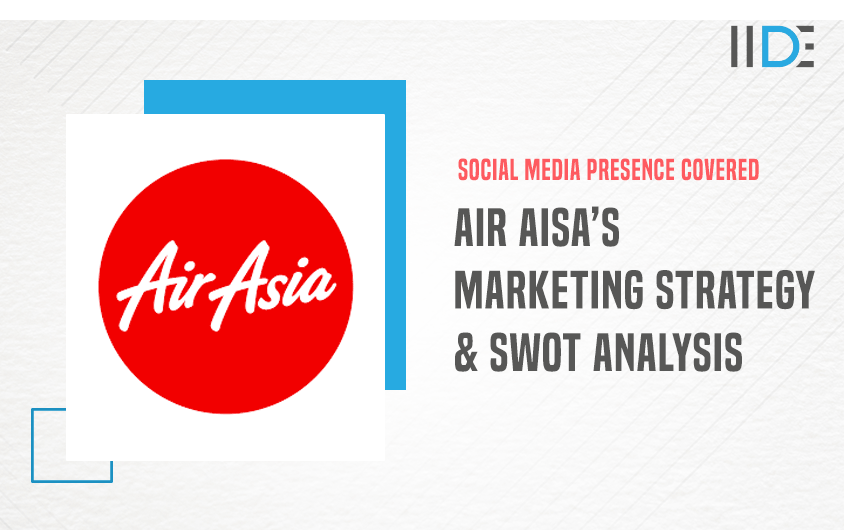 Back in the 1900’s Thai National Airlines was the only airline that could fly in the main routes of Bangkok – Chiang Mai with non-stop flights. But in 1993, Air Asia was established to finally connect Asia like no other airline company. Today it is one of the most reputed Asia-based airline companies.

They have a vast network of operations around the world, flying domestically and internationally. Their 5 main operational hubs are Singapore, Indonesia, Japan, Malaysia, and Thailand.

In the AirAsia case study, we shall decode AirAsia’s marketing strategy, marketing mix, SWOT analysis, social media presence, and also analyze its competitors. Before we get started, let’s get to know the company a little more. 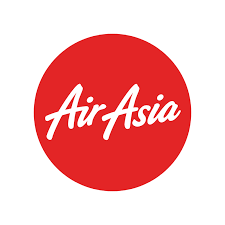 AirAsia is headquartered in Malaysia and provides transportation services to its passengers along with cargo and courier services. It was named as the “Best Low-Cost Airline Company” in the world for 9 consecutive years at the Skytrax World Airline Awards. It offered a new definition of affordable traveling with its Tagline – “Now Everyone Can Fly”.

Air Asia started with only 2 Boeing 737 – 300 series and started their first point-to-point flights. Today, it connects domestic and international flights to more than 165 destinations within 25 countries. The company is constantly using innovative solutions to provide low-cost transportation. Over the years Air Asia has broken the travel norms for Asian countries and is known as the ‘pioneer’ of low-cost travel in Asia. Let’s get into discussing their marketing efforts, starting with their marketing mix.

The Marketing mix refers to the set of actions and tactics which a company uses to promote its brand. A Marketing mix mainly focuses on the 4ps of an organization, which are Product, Place, Price, and Promotion. Let’s take a look at AirAsia’s marketing mix.

AirAsia is one of Asia’s most successful low-cost carriers. It is an international airline that began operations in Malaysia and has since expanded to include countries across the Asian continent, such as India and Thailand. The basic product strategy in its marketing mix is its low-cost air services. AirAsia focuses on providing guests with comfort through competent facilities that meet industry standards, as well as regular flights and secure point-to-point connectivity. 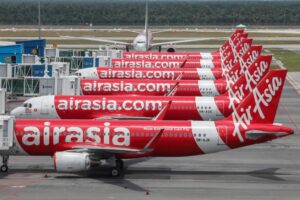 AirAsia is a global airline with operations in more than 160 destinations in 25 countries. Its routes include both domestic and international flights. Multiple ticket distribution networks exist, including internet booking, exclusive reservations, sales offices, and company-approved agents. Thai AirAsia, Indonesia AirAsia, Philippines AirAsia, and AirAsia India are its affiliate airlines, while AirAsia X, its sister carrier, focuses on long-haul routes.

AirAsia is known for its low fares and no-frills policy. It employs an anchor pricing policy, which establishes a baseline for pricing all AirAsia-operated flights. AirAsia uses anchor pricing to offer incredibly low rates on its services and fares, enticing consumers to consider traveling with the airline. In addition, rates are determined by the class of flight, airline load factors, travel dates and days, and competitor pricing in the airline industry.

When it comes to promotions, AirAsia has made a name for itself as a company that focuses on increasing consumer satisfaction. The AirAsia Big Loyalty Program is one of the company’s most popular campaigns, in which affluent customers win BIG points for any purchase they make and redeem those points for free airline tickets. 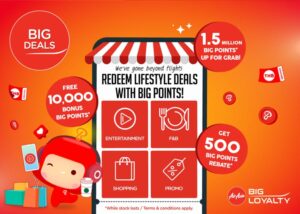 AirAsia focuses on delivering accessible promotions, in which customers are aware of new product offers with minimal company intervention through simple tools such as emails. AirAsia participates in a lot of price-based promotions. In order to build buzz, cheap flight tickets are given out based on demand in the form of promotional schemes. Apart from that, AirAsia engages in popular promotions such as social media advertising, print advertisements, and simple but efficient billboard advertising.

That was AirAsia’s 4Ps mix, detailing each strategy and its purpose. Let us now get into its marketing strategy.

In this section of the blog, we shall understand AirAsia’s marketing with the help of its STP (segmentation, targeting, and positioning) strategy.

AirAsia segments its market on the basis of three distinct, but overlapping factors:

AirAsia’s entire branding makes their target market quite self-explanatory. Their target audience is- travelers looking for inexpensive flights. These are people ranging from those who could not afford to fly previously, to corporate business employees whose employers are looking to fly them while cutting costs.

Simply put, AirAsia’s target market is the people whose purchasing motivations are price and simplicity. They have achieved effective targeting to this segment by making their brand synonymous with low-cost services. This has been possible through excellent brand positioning.

AirAsia’s positioning is very clear in being low-cost. This has been possible due to the company’s relentless communication through various marketing channels. Their slogan “Now Everyone Can Fly” itself sets the tone for the brand. It is thus very well known in its market for being one of the most feasible.

Through its efficient STP, AirAsia has been able to successfully develop its marketing strategy and make a name for itself in the market. But of course, there exist many competitors that require constant evaluation of strategies. Let’s understand AirAsia’s competitors better with analysis. 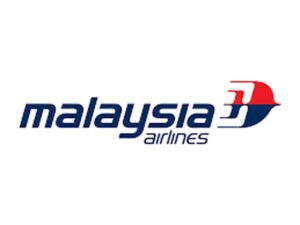 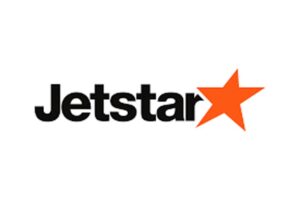 This comes with a lot of competition. The biggest competitors of AirAsia though, are Malaysian Airlines and JetStar Airways. Let’s see how they compare amongst a few key indicators.

This tells us that AirAsia mainly needs to understand its customers a little better and provide them with the extra services they need. AirAsia is already trying to achieve that by expanding their facilities to hotel bookings, tour packages, etc to try and gain some competitive edge along with diversifying their product portfolio. Some more of these improvement areas can be found through its SWOT analysis.

SWOT stands for Strengths, Weaknesses, Opportunities, and Threats. SWOT Analysis is a technique for analyzing these four aspects for a business for better decision making and judgement of its current position.

Following is the SWOT analysis of AirAsia:

Air Asia is smartly using its social media in building a direct relationship with its customers. They have official handles on all major platforms but for the purposes of this segment, we shall take a look at the main 3, which are Instagram, Twitter, and Facebook. Following is an analysis of AirAsia’s social media presence: 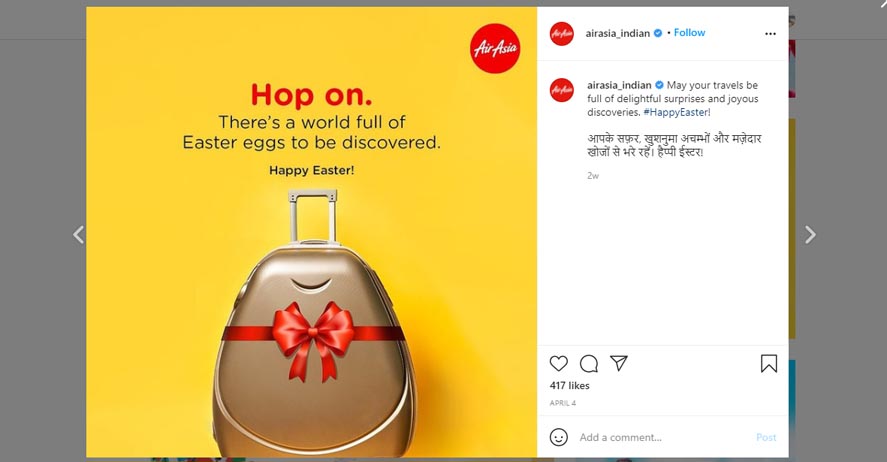 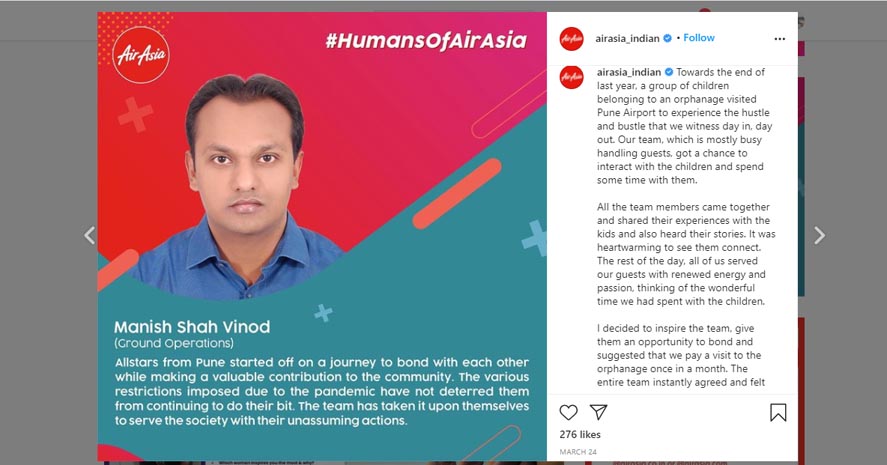 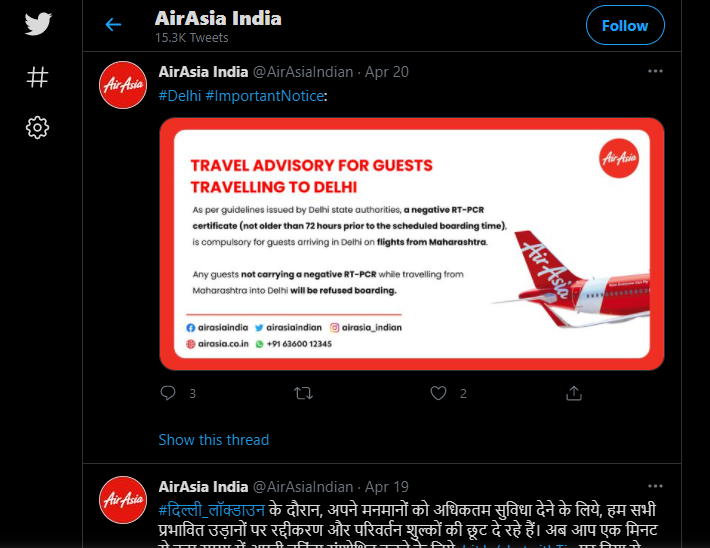 Overall AirAsia has a pretty good social media presence that communicates its services and engages with the customers.

AirAsia’s marketing strategy has worked wonders for the company in communicating exactly what they wanted to the customers. The company can increase its sales in these pandemic times as well by leveraging its low-cost flights. Given the current situation, in-flight experience, especially hygiene matters a lot to customers so AirAsia should heavily market its hospitality and put customers at ease in availing their services.

In order to stay ahead of the competition, the company needs to constantly invest in improving the additional facilities that make a difference to customers in today’s times such as disposable in-flight meals, complimentary WiFi, entertainment facilities, and varied seat options. Along with these improvements, if AirAsia continues to deliver to its target market effectively, it will surely maintain its differentiated position in the industry.

Liked our work? Interested in learning more? Do check out our Free Digital Marketing Masterclass by Karan Shah.

Thank you for reading this case study. We hope you found what you were looking for. If you did, be sure to share, comment, and let us know!