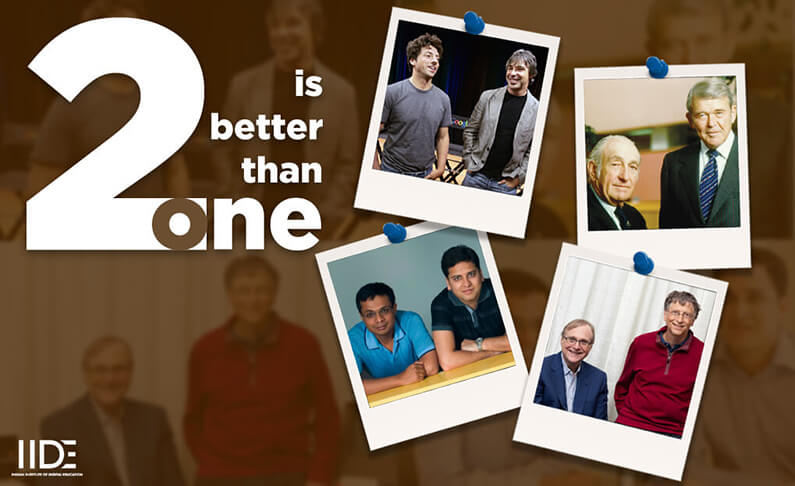 Companies that you love and look up to are often products of more than one mastermind. This is because entrepreneurs operating solely may not be as capable, as visionary and as intuitive as two entrepreneurs working and growing a business together. Here are four revolutionary brands that became big thanks to the expertise and support of two co-founders: 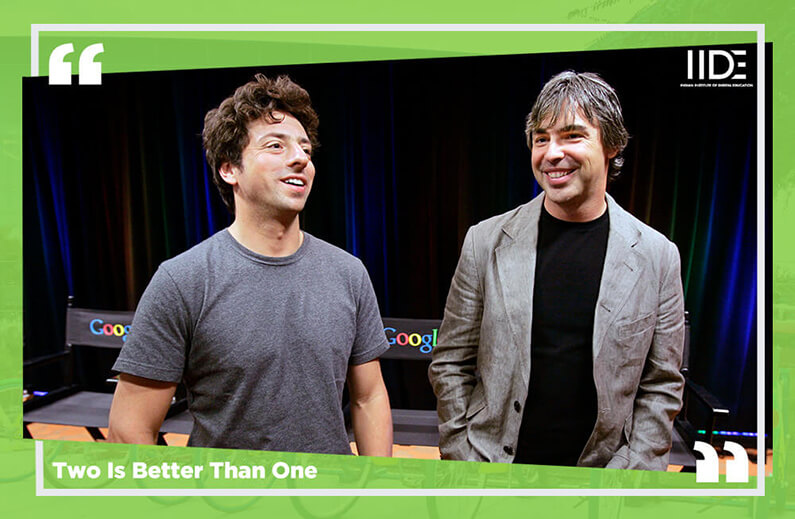 Google’s story begins way back in 1995 when Larry Page was considering Stanford University for grad school and Sergey Brin, a student there, was assigned to show him around campus.

In their first meeting, Larry and Sergey disagreed about everything; but by the following year, their friendship blossomed when Brin agreed to help Page with his research project on backlinks. And so, without them realising at the time, they began working on a search engine that would fetch them thousands of dollars in the coming months.

BackRub essentially used a web page’s backlinks to determine the page’s importance and relevance to a search query. The search page was kept simple due to the lack of a web developer but they were challenged to find enough computing power to handle queries as the tool became increasingly popular.

Soon after, they changed the name to “Google” – a play on the mathematical expression for 1 followed by a hundred zeros that also aptly reflected Larry and Sergey’s mission to “organize the world’s information and make it universally accessible and useful”.

Also Read: Top 10 Tips On How To Stay Secure While Using The Internet

Although they were working from their dorm rooms, by mid-1998, Google was getting 10,000 search hits per day and catching the attention of Silicon Valley investors.

In August 1998, Sun co-founder Andy Bechtolsheim wrote them a check for $1,00,000, and Google Inc. was officially born. With the new investment, the team upgraded their workspace and set-up their first office in a friend’s garage in California. In August 2004, the company went public with an IPO and raised $1.67 billion!

Larry and Sergey always preferred to keep things colourful and unconventional – from their first server made out of Lego to their currently famous Googleplex office! The two founders’ passion for digital and love for the unconventional make them the perfect duo for leading this visionary company.

Google currently has more than 88,000 employees in over 50 countries and has developed over 200 products worldwide.

Also Read: How Digital Media Has Changed The Way We Celebrate Valentine’s Day 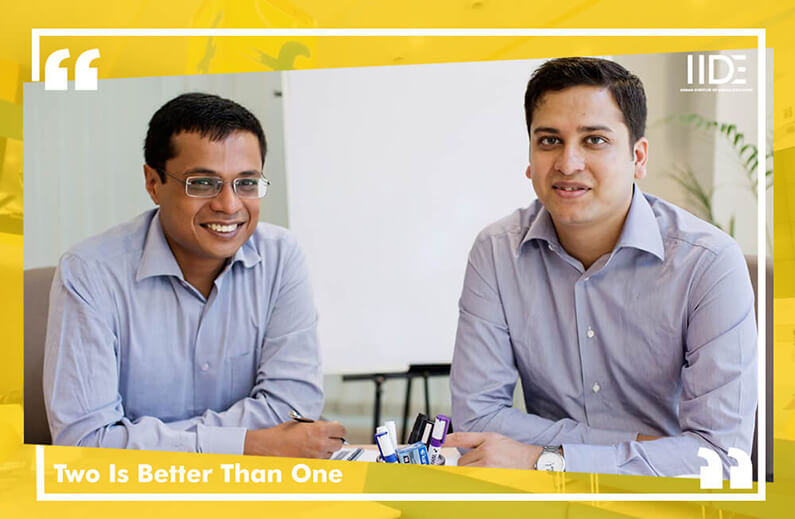 Founded in 2007 by Sachin and Binny Bansal, who aren’t brothers, Flipkart is India’s first e-commerce company that came into play when e-commerce was only taking its first steps in the country. Lead by two visionary people, Flipkart today also owns Myntra, Jabong, Phone Pe, eBay India, and some more companies.

Sachin and Binny are alumnis of IIT – Delhi where they studied computer science engineering together.

After graduation, the two began working at e-commerce giant Amazon and it was there that they realised the enormous potential of e-commerce in India and decided to launch their own portal!

At the time of launch, Flipkart only sold books but soon expanded to cover a large variety of items – from kitchen appliances to clothes.

Also Read: Sobo-ites Rejoice: A Flagship Digital Course Is Now In Your Area

In a country filled with people who prefer to buy in cash, from shops, and only after examining the products themselves, Flipkart naturally faced enormous challenges in the beginning and were burdened to bring about the shift in the mindsets of the masses.

Flipkart brought online multiple retail categories, cash on delivery system, and huge discounts that took e-commerce in India to a massive level. Flipkart hit the $15 billion valuation mark in less than a decade, and both the co-founders went on to become billionaires.

India Today magazine ranked the two #26 in India’s 50 Most powerful people of 2017 list. While Sachin works as the executive chairman, and Binny oversees functions such as capital allocation, mergers and acquisition, and CEO selection of the other companies, it’s clear that the two founders complement each other’s skills! 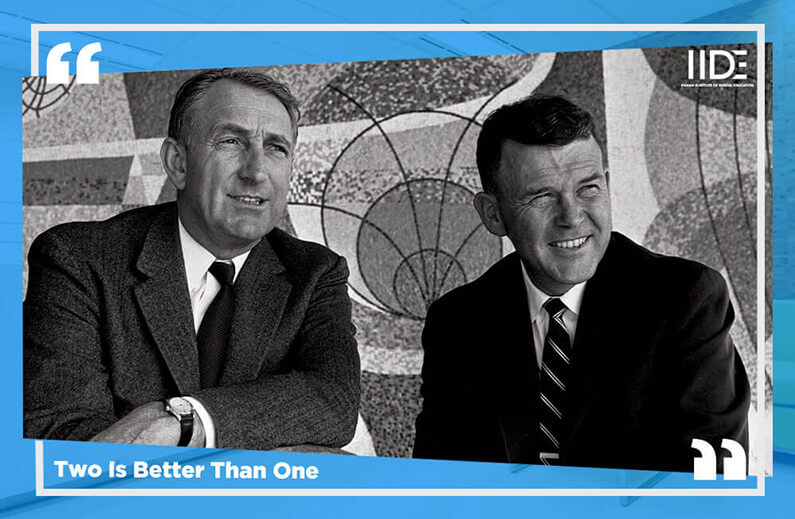 William Hewlett and David Packard met at Stanford in the early 1930s and immediately became close friends thanks to their mutual love for electronics and the outdoors.

After getting their degrees, Hewlett continued with his education while Packard took up a job in General Electric. In 1939, however, they decided to start a business together and flipped a coin to determine its name.

Since Hewlett got heads, the company was called Hewlett-Packard! Working out of Packard’s garage, their first product was an automatic foul-line indicator for bowling alleys.

Although ingenious, the product had no market. Moving on quickly, they decided to create an audio oscillator, the design of which was outlined in Hewlett’s thesis.

The oscillator caught the attention of Walt Disney who bought eight of the devices for his upcoming film Fantasia! Exuberant by the sale, the two founders pushed the product even more and, at the same time, began working on another product.

After that, HP has moved only in an upward trajectory. In 1943, the company sales became $1 million.

At that time, HP began to devise a unique company culture that soon became known in the Silicon Valley as “The HP Way”. It comprised of a set of practices and policies that offered HP workers generous benefits, including medical insurance to cover catastrophic health problems, something that was virtually unheard of in business at the time.

HP’s first office – the garage – is considered to be the birthplace of Silicon Valley and is a historical landmark.

Today, HP is at #42 on World’s Most Valuable Brands. HP now has more than 3,00,000 employees globally and specializes in developing and manufacturing PCs, networking hardware, computer storage and delivering services, software, and printers and imaging products.

There isn’t a person in the world who hasn’t heard of HP or seen one of its products and it’s all thanks to the wonderful partnership between Hewlett and Packard! 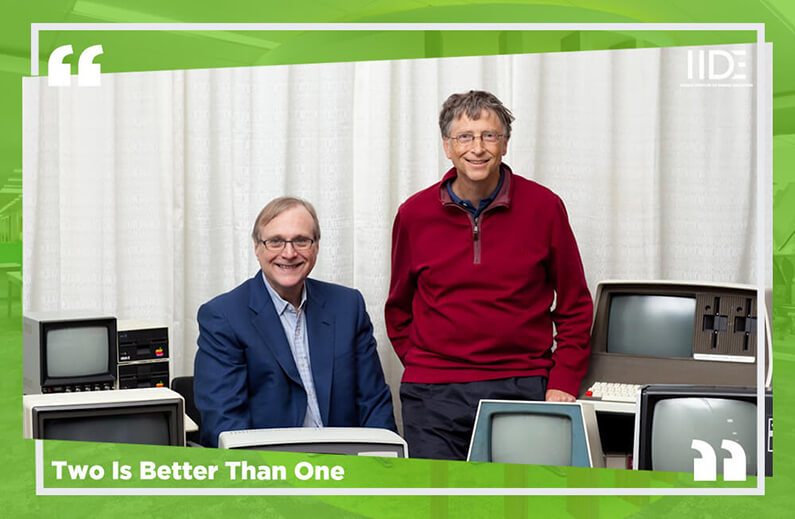 The last on our list, Microsoft, is a household name for anyone who uses a computer, all over the world. From Windows, to Office, to Skype, and recently Xbox, every person has benefitted from Microsoft products at some point or the other.

Bill Gates and Paul Allen, two childhood friends, formed Microsoft in 1975 to profit from their shared computing skills. It was Allen who came up with the name “Micro-soft” – a combination of the words microcomputer and software.

The company began operations when the smart and enterprising pair noticed an opportunity to build a BASIC interpreter for the (at the time) groundbreaking Altair 8800 microcomputer.

Despite not actually owning an Altair of their own, they built the interpreter using a simplistic simulation.

Also Read: Why Every College Student Should Spend At Least 15 Mins A Day On LinkedIn

After quickly contacting Altair and showing them the workings, the team started a successful business partnership with MITS, Altair’s parent company.

In the 1980s Microsoft created its own operating system, Xenix, which failed to capture the market but formed the basis to create MS-DOS, the company’s first true operating system and its biggest business success to date.

In 1985, IBM and Microsoft joined hands to create OS/2, the operating system for IBM computers, but Windows soon overshadowed OS/2 and by the 1990s, Microsoft had captured 90% market share of the world’s personal computers.

Over the years, the company expanded in all directions. And although the two founders do not actively contribute to the company’s workings today, Microsoft is still the go-to company for desktop users across the world.

It’s quite evident that #TwoIsBetterThanOne. Can you think of other ground-breaking companies that started with two people? Let us know in the comments below!