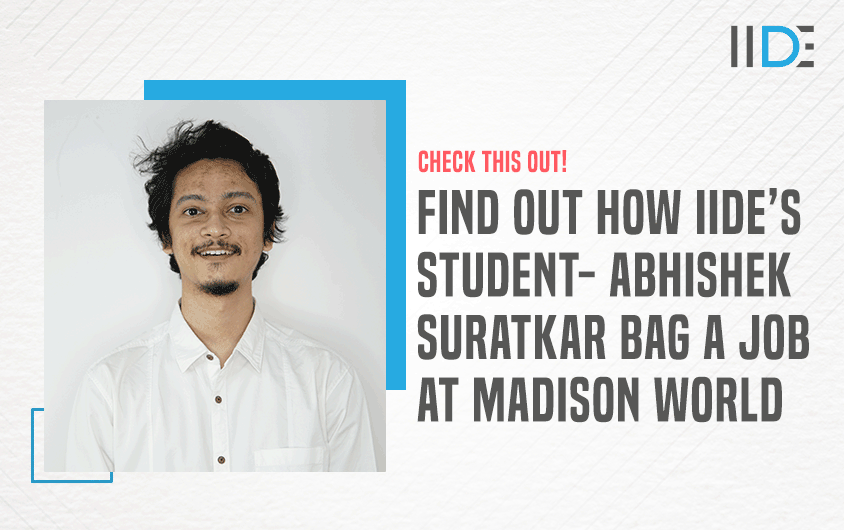 What is the formula to a successful career? What’s the most important factor? Is it degrees and certifications?

We would say not exactly. A degree or a certification is important but more than that, is the grit and determination of the student. Practical learning and exposure are very vital in shaping the career of a young learner.

And here’s an example of just that. Even before IIDE’s MBA-Level Postgraduate Program in Digital Marketing ended, one of our students, Abhishek Suratkar, bagged a pre-placement job offer at Madison World as a Media Planner.

Over 1,000 communication professionals work for the Group in offices across India and Bangladesh. The gross billing for Madison World is Rs 4,000 crores.

The interview process started with Abhishek receiving a call from Madison’s HR. He was delighted to know that his profile was considered for the role he was interested in. A basic telephonic interview to understand his profile, background, and experience in media advertising was conducted.

This call was followed by an interview round with Mr. Milan Modi, Account Director, who had previously trained Abhishek and his batchmates in media planning at IIDE as a guest lecturer. The questions focused on the core concepts of paid media which were answered flawlessly by Abhishek because of the hands-on practice he received during the live campaigns and projects he worked on.

Going through the social media ads and media planning assignments of his PG program at IIDE further helped Abhishek prepare thoroughly for his interview. He also mentioned that his previous interview rounds and mock interviews for a similar role instilled confidence in him.

“Module lectures & training by Karan Sir, Daksh Sir, Mezzy Sir & Aditya Sir as well as the guest lectures by Milan Sir got me interested in Paid Media & inclined me towards taking this up as a career path. I would go through all the notes taken during the lectures & do my own research to dig deeper in the Paid Ads Industry to prepare myself for the role” said Abhishek Suratkar when asked about what made him ready for this job.

His experience of working at Madison is coming through really well. The seniors at the Marico Team (which he was drafted into) have welcomed & guided him to learn & fit in at his own pace for handling the clients & campaigns.

Currently, he is planning campaigns for brands like Parachute, Hair N Care, Livon, and Saffola. With varying brands & budgets from 1 lac to 70+ lac budgeted campaigns, it has been a huge learning curve in several ways.

Since he joined midway in December, most of the campaigns were already underway & his tasks included keeping track of weekly progress to end the year with the best campaign results. He will now be responsible for creating fresh campaigns and plans for Livon, Saffola Honey, Soya & Oats.

Abhishek hopes to continue with the same enthusiasm & drive to upskill himself for the coming years. And now that he has completed his graduation from IIDE as well, his confidence is only getting stronger.

If you’re a student who wishes to embark on a similar journey as Abhishek by learning digital marketing integrated with the principles and skills of the management industry, then you must definitely check out IIDE’s MBA-Level Post Graduate Program in Digital Marketing.

She has been working with new trends in the Education industry for the last 2 decades. Starting her career as an Academic Counselor in the Middle East with Emirates College for Management & Information Technology......[Read full bio]