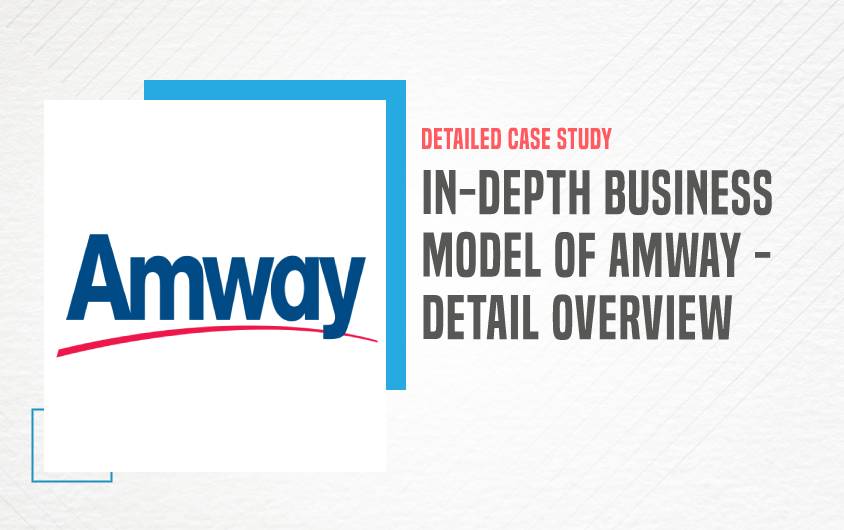 You might have come across the name “Amway” and its “entrepreneurial business opportunities” and might have also wondered how it has become a mega-corporation and what it is all about? If so, then this piece is written for you.

It’s no secret that Amway is one of the world’s leading direct-selling companies with distributors in over 100 countries catering to more than 1000 different markets. This case study deep dives into knowing about Amway, its marketing and advertising strategy along with its business model and SWOT analysis

So, let me start by providing you with some basic information about Amway and some of its history in the coming section. American Way or as popularly known as Amway is an American privately owned direct selling company that was founded in 1959 and is still looking brand new. After more than 60 years of its existence, the company is today one of the strongest business entities in the United States of America.

The corporate headquarters for Amway is based out of Ada, Michigan. It deals in the manufacturing and marketing of the widest range of consumer products. These products include home care, nutrition, health & beauty, and personal care and electronics.

Amway first established itself in India back in 1995 and started its full-fledged business operations in 1998.

Now that you know about Amway, let us now go through Amway’s marketing strategies that have roped in success for a long time now.

If you’re looking into Amway’s business, then you must be curious about their marketing strategies. You must be wondering how they came up with the concepts of mass-market sales and promotion.

The answers can be found in looking at some of their past results as well as going through the commentaries of the company itself. The following sections go through a few of the major marketing strategies that Amway has implemented in India and around the world.

Amway’s Business Model in India and Around the World

So talking about Amway’s business model in India and around the world, the company works through independent “distributors” who sell Amway’s consumer products and earn income from the sales they make and Amway charges some commission out of it.

To understand this in simpler terms, Amway offers business opportunities to its existing or potential customers to sell Amway’s products.

The business model is based on people who wish to start and/or advance an independent small business. For this purpose, Amway has also established several business units or “units of distribution” depending on the markets in which it executes its business operations globally.

Through these individual distributors, Amway has entered into partnerships with various regional business owners in countries around the globe and have implemented its business model on a global scale. As a result of this, Amway has increased its market penetration in the retail industry.

An ambassador is someone who represents an organisation or a brand and can bring in business with his/her personal potential and expertise. These ambassadors usually have huge fan followings which also creates a sort of trust in the minds of potential customers.

Amway has partnered with many popular celebrity figures over the years which includes popular Brazilian football player Ronaldinho, Australian cricketer Adam Gilchrist and Athletes such as  Asafa Powell and Liu Xiang and many other celebrities to promote its products at country levels. 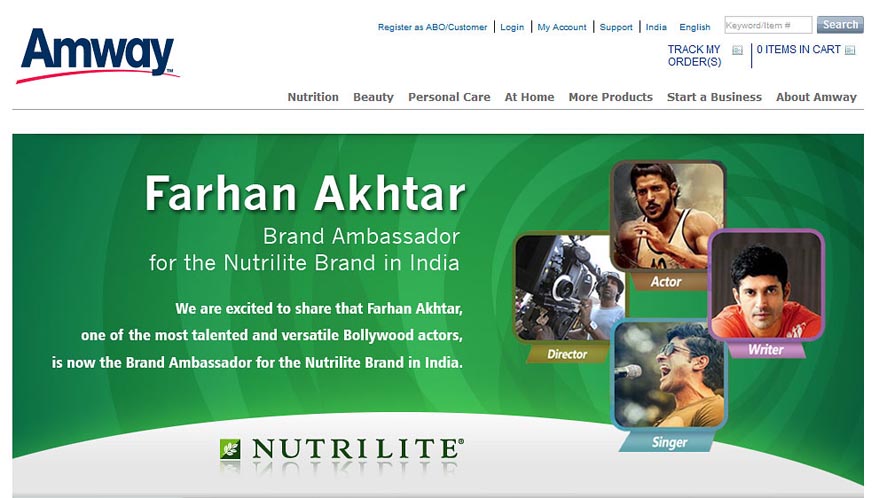 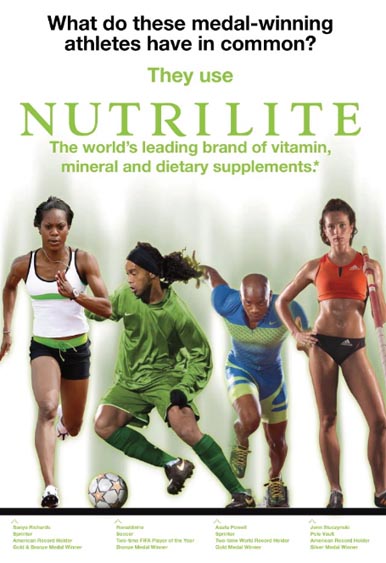 Amway is one of the highly reputed and most famous business when it comes to implementing various sales techniques. In the frequent years, Amway, with the help of its website has got more and more accessible, opened wide for everyone to view.

Having a huge collection of products to offer, Amway initiates most of these products are through promotions, while others are given out as part of loyalty program discounts. Most of the time, the discounts provided through promotions are upto 20% to 30% off the retail price.

Now that we have gone over the primary marketing strategies of Amway, let us go through Amway’s Advertising Strategy in the coming section.

When it comes to Amway’s advertising strategy, the goal of the company is to create a strong emotional connection in the minds of the consumers.  To do that, Amway creates and releases champion themed, culture-changing or inspirational advertising campaigns. These types of advertising campaigns give people a reason to keep themselves hooked on to the advertisement. 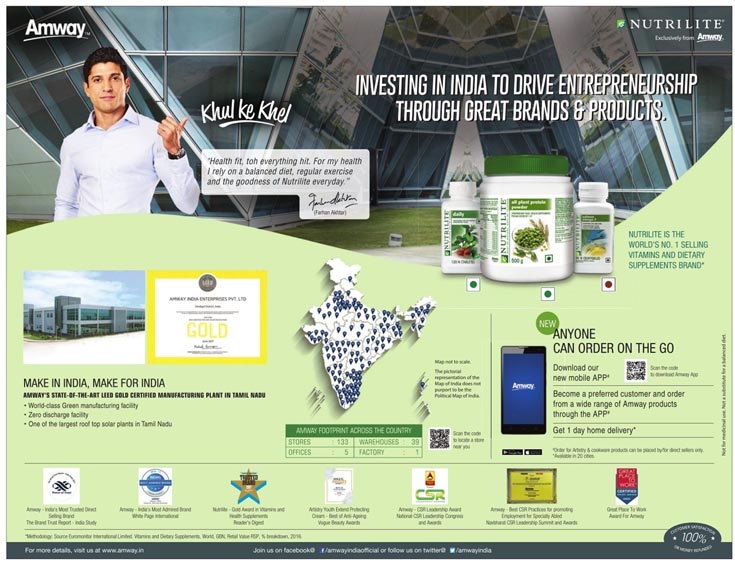 This advertising campaign was released back in 2016 to promote its protein products. The campaign, “Khul Ke Khel” focuses on showcasing that how important it is for today’s business entrepreneurs to be energetic all day long in today’s fast-paced life.

The campaign was accompanied by a catchy theme song that kept the audience hooked to this advertisement.

Don’t Limit My Attitude – A Marketing Campaign of Amway Attitude

Amway released a series of advertisements in 2018 to promote its beauty brand called Attitude. As the brand’s products are targeted towards women, this campaign, “Don’t Limit My Attitude” revolved around bringing out the fact that it’s all about having the right attitude, which takes women to newer heights in life irrespective of what others have to say.

The below advertisement was released back in 2010. It focused on showcasing what the Nutralite brand is all about. Throughout the video, the brand highlighted its superiority and its presence and along with what people experience about Nutralite.

These were some of the most popular advertising campaigns of Amway in India. It also has undertaken various other corporate social responsibility (CSR) campaigns such as “Power of 5”, “Eat Hard Eat Smart” that focused on empowering kids and eradicating hunger in India.

Now that you have an idea of how the advertising strategy of Amway revolves around, let us now go through the SWOT analysis of Amway in the coming section.

SWOT analysis is a method of evaluating the Strengths, Weaknesses, Opportunities and Threats involved in a project or the business in general. So here is a quick overview of Amway’s SWOT Analysis.

With this, the case study on Amway comes to an end, let us now go through the finals points in the coming section.

Amway is the largest direct-selling company in the world with over $8.4 billion in annual revenue. The success of the business model is primarily due to numerous and successful marketing strategies that were designed to enhance sales and retention of retail customers.

The company has experienced phenomenal growth over the last few decades due to being able to innovate quickly and adapt to customers needs. However, being tagged as an MLM (Multi-level Marketing) company and a recent dry run on the marketing fronts has kept the company out of sight. With that being said, only time will tell how Amway has utilized its existing potential presence to further strengthen its competitive advantage in this digital world.