In the previous article, we did an elaborative SWOT analysis of TD bank – A Canadian multinational banking and financial services. This time, we will tackle the SWOT Analysis of Manulife – A Canadian Multinational Insurance Company.

Manulife Financial Firm (also known as Financière Manuvie in Quebec) is a Canadian multinational insurance and financial services corporation headquartered in Toronto. In Canada and Asia, the corporation is known as “Manulife,” while in the United States, it is known as “John Hancock Financial.”

In India, according to Manulife CEO Roy Gori, it will become a significant element of the Asia business. Manulife launched a joint venture with Mahindra & Mahindra Financial Services, an Indian company with over 6 million consumers, last week.

Manulife’s marketing strategy is to become global while keeping things simple. The company had the best marketing plans to cater to everyone possible. If you’re interested in learning more about digital marketing but don’t know where to start, Karan Shah, our CEO and Founder of IIDE, presents a free Masterclass on Digital Marketing 101.

In this blog, we will look at the SWOT analysis of Manulife but before that let’s know some facts about the company. 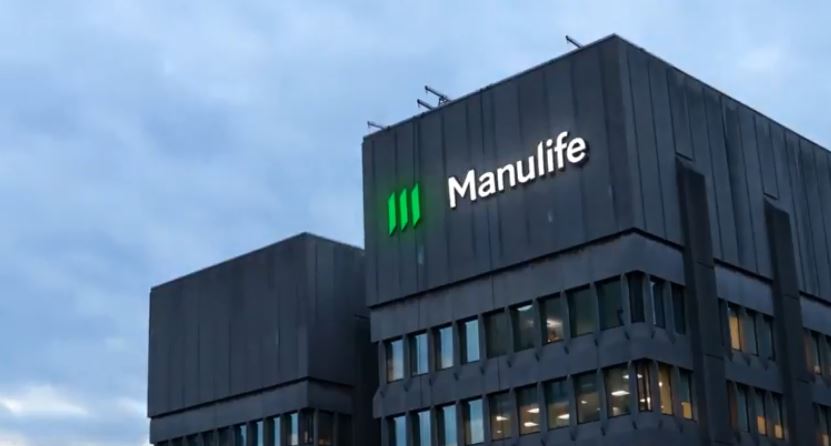 On June 23, 1887, Manulife was established by an Act of Parliament as “The Manufacturers Life Insurance Company.” Sir John A. Macdonald, Canada’s prime minister and the company’s first president, was among its corporate and political backers.

Manufacturers Life building in Toronto, Ontario, c.1929. As Manufacturers Life expanded internationally and worked to diversify its business, it decided to change its name to better represent a wider range of products and services. The name was changed to Manulife Financial in 1990.

The company has over 28 million customers and branches all over the world that offer a diverse range of insurance products and services:

As it offers services all across the world, Manulife faces a lot of competition. The following are some of Manulife’s competitors:

Now that we understand the company’s core business, let’s delve into the SWOT analysis of Manulife.

A SWOT analysis determines the strengths, weaknesses, opportunities, and threats of an employer. It is a confirmed control paradigm that permits Manulife to benchmark its enterprise and overall performance towards that of its competition and the enterprise as a whole.

To higher apprehend the SWOT Analysis of Manulife, check with the infographics photo below 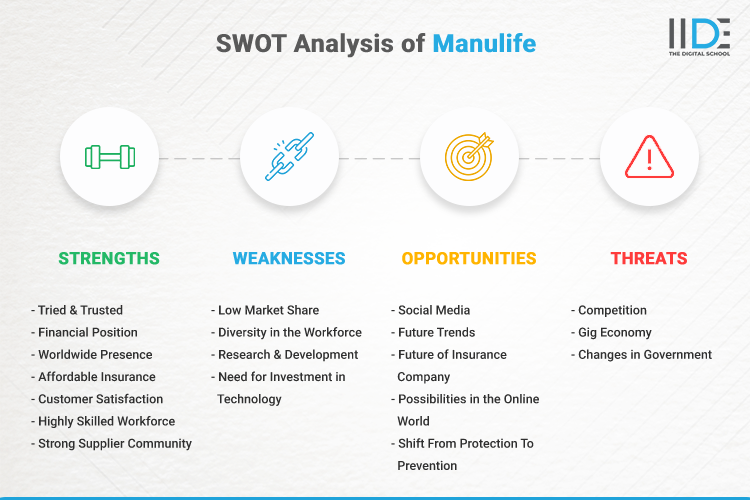 Now first let’s start with the strengths of the employer from the SWOT analysis of Manulife.

Opportunities are uncontrollable external circumstances that a person may be able to take advantage of. These external factors could give the company an advantage in the marketplace. Opportunities for Manulife are:

Threats are those factors that have the potential to provide harm to the organisation in any form. The threats of Manulife are as follows:

This ends our complete SWOT analysis of Manulife. Let us conclude our learning below.

Manulife is a well-known insurance brand with a significant global presence. In the SWOT analysis of Manulife, we observed that the company is heavily reliant and enjoys strong brand recognition and trust with its customers. It has a strong distribution network and has reached across all the markets it serves, but suffers from an increasing number of suppliers in the same space and better R&D efforts by its competitors.

Also, one point not to miss out on is that Manulife is in line with its marketing effort. It has created a customer base for itself by tapping into the digital era and creating a social media presence on several platforms. If you are interested in learning digital marketing, don’t forget to check out IIDE’s 3 Month Advanced Digital Marketing Course.

We hope this blog on the SWOT Analysis of Manulife has given you a good insight into the company’s strengths, weaknesses, opportunities and threats.

If you enjoy in-depth company research just like the SWOT analysis of Manulife, check out our IIDE Knowledge portal for more fascinating case studies.

Thank you for taking the time to read this, and do share your thoughts on this case study of the SWOT analysis of Manulife in the comments section below.