SBI is the world’s 55th largest bank ranked at 221st in the Fortune Global 500 list of the world’s biggest corporations of 2020, being the only Indian bank on this list. The rich heritage and legacy of over 200 years, accredits SBI as the most trusted bank by Indians through generations.

The marketing strategy of the SBI includes traditional as well as digital marketing. In today’s time, digital marketing is very important for reaching out to customers as everything is shifting towards digital. If you want to learn digital marketing and its scope, do check out Free Digital Marketing Masterclass by Karan Shah, the founder and CEO of IIDE.

Before we dive into the SWOT Analysis of SBI, let’s take a look at the company, its history, finances, products, and opponents.

Quick Links hide
About SBI
Services By SBI
Competitors of SBI
SWOT Analysis of SBI
Strengths of SBI
Weaknesses of SBI
Opportunities for SBI
Threats to SBI
To Conclude, 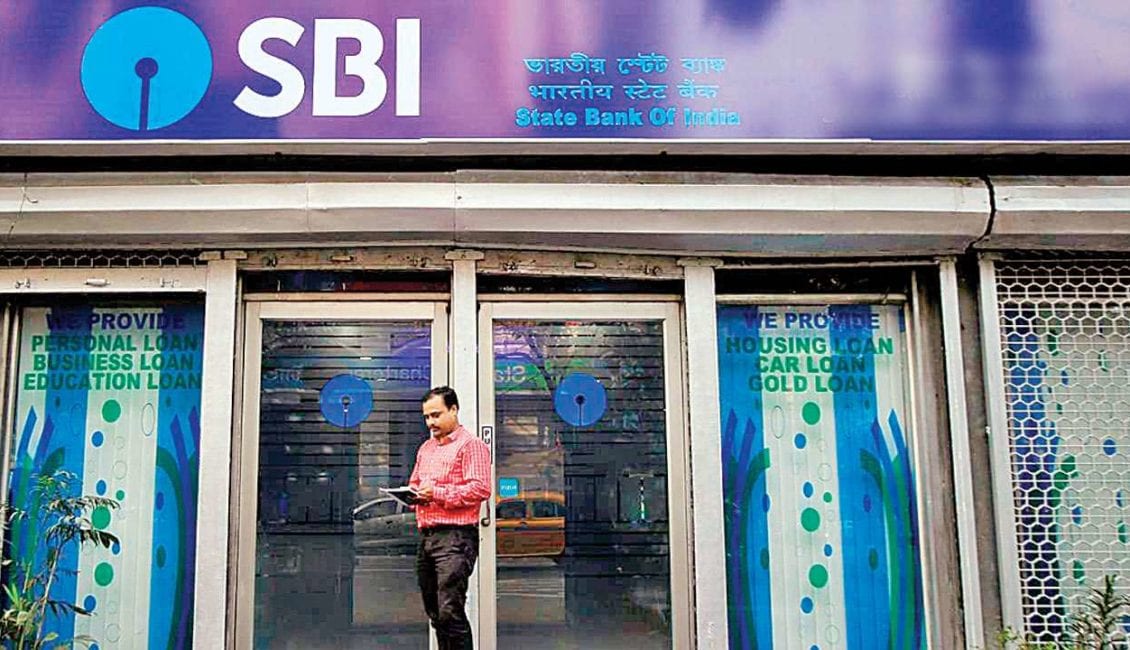 State SBI (SBI) is an Indian multinational public sector bank that deals in the banking and finance sector. The bank descends from the Bank of Calcutta, founded in 1806 via the Imperial SBI, making it the oldest commercial bank in the Indian Subcontinent.

The Bank of Madras merged into the other two presidency banks in British India, the Bank of Calcutta and the Bank of Bombay, to form the Imperial SBI, which in turn became the State SBI in 1955. Overall the bank has been formed from the merger and acquisition of nearly twenty banks throughout its 200-year history. The Government of India took control of the Imperial SBI in 1955, with the Reserve SBI (India’s central bank) taking a 60% stake, renaming it state SBI.

SBI, the largest Indian Bank with 1/4th market share, serves over 45 crore customers through its vast network of over 22,000 branches, 62617 ATMs/ADWMs, 71,968 BC outlets, with an undeterred focus on innovation, and customer-centricity, which stems from the core values of the Bank – Service, Transparency, Ethics, Politeness, and Sustainability.

It is a public sector bank and the largest bank in India with a 23% market share by assets and a 25% share of the total loan and deposits market. It is also the fifth-largest employer in India with nearly 250,000 employees. Growing with time, SBI continues to redefine banking in India, as it aims to offer responsible and sustainable Banking solutions.

After understanding the core of the corporation, let us now proceed to the SWOT analysis of SBI.

A SWOT analysis is a strategic planning method used to evaluate the strengths, weaknesses, opportunities and threats involved in a project or a business venture. A good SWOT analysis can help you reach your online marketing goals or kick your business startup into high gear.

To better understand the SWOT analysis of SBI, refer to the infographic below: 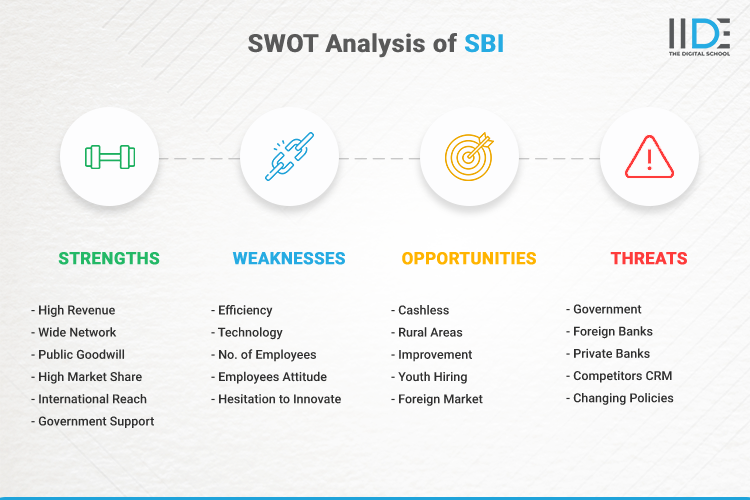 Let’s proceed further with expanding on the strengths of the SBI from the SWOT analysis of SBI.

Opportunities are potential areas of focus for a company to improve results, increase sales, and, ultimately, profit.

This ends our study on the SWOT analysis of SBI. Let us conclude our learning below.

To sum up, SBI has a huge mass of incredibly innovative services providing enough options. The company has the advantage of the brand trust of thousands in India. It has been updated with technology although not the most advanced but not behind as well; however, SBI should start focusing on the creative advertisement to attract more inventors in India as well as internationally.

With a huge increase in the service industry. There is a very high competition where marketing plays a crucial role-taking advantage of technology not merely in this industry in which every other company is focusing on digital marketing to rise ahead of each other.  If you have the curiosity to learn you may check out IIDE’s 3 Month Advanced Online Digital Marketing Course to know more.

We hope this blog on the SWOT analysis of SBI has given you a good insight into the company’s strengths, weaknesses, opportunities and threats.

If you enjoy in-depth company research just like the SWOT analysis of SBI, check out our IIDE Knowledge portal for more fascinating case studies.

Thank you for investing your valuable time to read this, and do share your thoughts on this case study of the SWOT analysis of SBI in the comments section below.