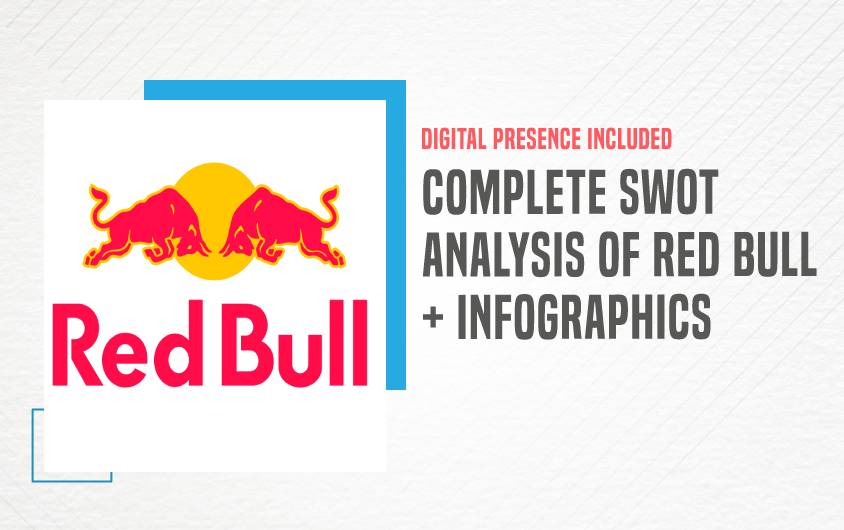 With their market position, Red Bull’s marketing efforts have paid off. Marketing improves over time in response to changing societal preferences. Attend our Free MasterClass on Digital Marketing, taught by IIDE’s Founder and CEO, Karan Shah, if you want to stay current with today’s effective marketing.

Red Bull is a success story that originated in Europe. They established a powerful brand reputation through the use of a vibrant logo with two opposing bulls and a unique tag line, ‘Red Bull gives you wings.’ It has associated itself with extreme sports, new music, and art, all targeted primarily at the younger crowd, through creative marketing and sponsorship.

It was met with criticism from the Food and Drug Administration (FDA), which refused to approve it for sales, yet despite this, it became a success through clubbing and snowboarding people. Even when it was allowed to be sold, this anti-establishment posture garnered support among customers. It rapidly expanded to neighbouring nations and the American market.

The product was marketed at trendy clubs and bars, and the credibility of individuals regarded highly by the younger target group, such as Dj, was used. Red Bull’s self-proclaimed distributors used their local knowledge to help promote the brand and its goods. By 2020, Red Bull sold more than 7.9 billion cans across the world in over 171 countries. To date, the firm has been extremely successful, with a significant year-on-year increase in both sales growth and corporate value.

The top opponents of Red Bull are as follows –

Red Bull has risen to the top of the market as a result of its ability to endure competitive pressure, so let’s take a deep dive into the SWOT Analysis of Red Bull to learn more. 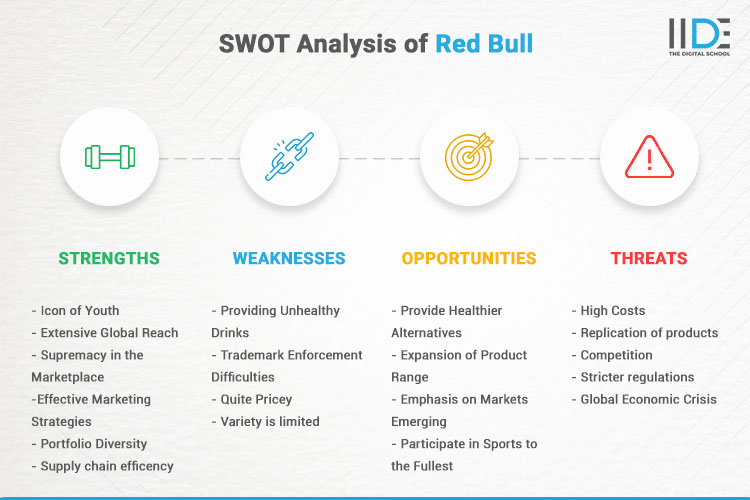 Strengths are an organization’s distinct skills that offer it a competitive edge in gaining greater market share, attracting more customers, and maximising profitability. Red Bull, being one of the leading firms in its field, possesses various strengths that enable it to prosper in the market. Red Bull’s strengths are listed below:

Weaknesses are elements of a company or brand that needs to be improved. Despite the above-mentioned strengths. Red Bull’s shortcomings are places where it can improve utilising SWOT analysis to increase its competitive advantage and strategic posture. The following are Red Bull’s significant flaws:

Opportunities are possible areas of emphasis for a firm to focus on to enhance outcomes, boost sales, and, eventually, profit. Despite the weaknesses mentioned above, Red Bull has a lot of opportunities for growth and development: 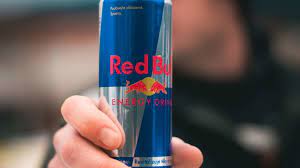 Threats are environmental elements that might harm a company’s success. Red Bull’s success has brought with it a variety of threats. Red Bull’s threats include the following:

Red Bull is the world’s leading energy drink brand right now, thanks to its distinct, well-established brand and large market share. However, the brand’s sales of energy drinks are heavily reliant on them, and it doesn’t have much else to offer. As a result, Red Bull must keep an eye out for stale goods, health crackdowns, and competition. It can do this by offering new products, particularly those that are health-conscious.

Furthermore, to maximize profitability, Red Bull should focus on sales and make a cost reduction. The large advantage it now has will allow it to do so without introducing major changes to the manufacturing process or starting on a costly marketing plan.

Considering the rising competition in a competitive field like Food and Beverages, firms have to compete for their customers through improved marketing efforts. Preparing for the required Digital Marketing abilities and completing Certified Courses may lead to job chances with major tech organisations such as Red Bull.

IIDE offers short-term certifications that may get you up to speed in a variety of digital skills and experience in areas like social media marketing, media planning, and SEO in as little as five days.

If you enjoyed this in-depth company analysis, visit our IIDE Knowledge area for more case studies like this.

Thank you for spending the time to read this Accenture SWOT Analysis. Please share your thoughts on the case study in the comments section below.