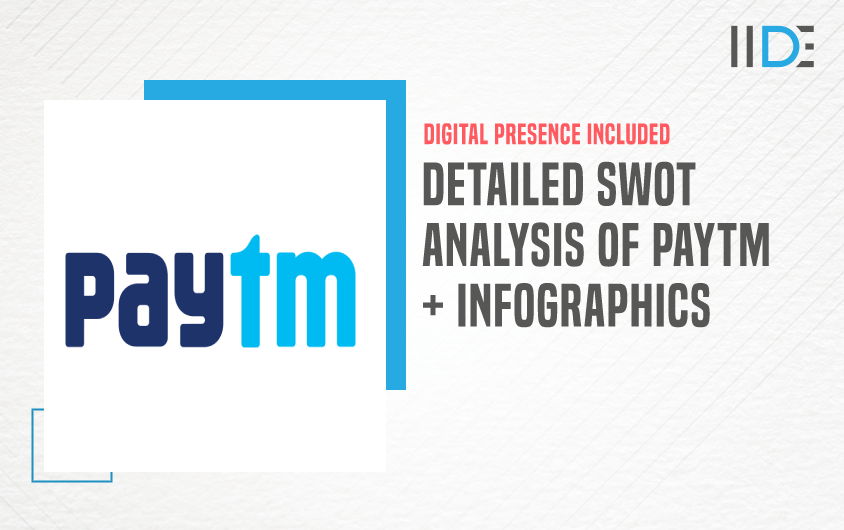 Previously, we did a thorough business model of PayPal. Today we are going to see the thorough SWOT analysis of Paytm.

Paytm is India’s leading financial services company which provides consumers, businesses, and online companies a platform for financial services and digital payment. The business model of PayTM is a must-know for everyone! Paytm has over 350 million active users and is one of the top platforms for digital payment methods and captures a large audience across all economic strata in the nation.

Paytm has been making perfect use of digital marketing since it was founded in the year 2014. As the world was online and still shifting online, the marketing techniques are changing which is digital marketing. If you are interested in learning about the latest – check out our  Free MasterClass on Digital Marketing 101 by the CEO and Founder of IIDE, Karan Shah.

Before we begin with the SWOT analysis of Paytm, here’s a deep dive into the company’s history, founding, products, financial status, and competitors.

It is one of the leading online payment methods, with its usage surging to new heights during COVID years. Vijay Shekhar Sharma, Founder and CEO of Paytm, has made banking accessible and convenient to people across the country. It was founded in August 2010 in Noida by Vijay Shekhar. In 2017 Paytm became India’s first payment app to exceed 100 million app downloads.

Paytm is an online money transfer service. It offers a variety of products & services, including

After understanding the core of the company, let us now proceed to the SWOT analysis of Paytm.

A SWOT analysis determines the strengths, weaknesses, opportunities, and threats that a firm faces. It’s a tried-and-true management model that lets Paytm compare its company and performance to that of competitors and the industry at large.

It’s an excellent tool for determining where the firm thrives, where it falters, generating remedies, and determining how the organisation may expand.

To better understand the SWOT analysis of Paytm, refer to the infographic below: 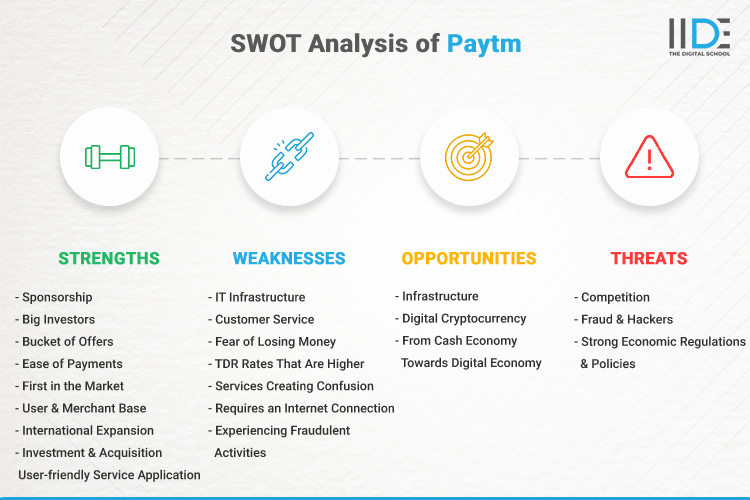 So let us first begin by enhancing the strengths of Paytm from the SWOT analysis of Paytm.

Strengths are an organisation’s unique qualities that give it an advantage in acquiring greater market share, attracting more customers, and boosting profitability. Paytm’s advantages are as follows:

Weaknesses are aspects of a company or a brand that should be improved. The following are Paytm’s primary flaws:

Opportunities are areas in which a firm might focus to improve performance, improve services, and, ultimately, profit.

Bonus Tip: As the world is moving towards digitalization it is opening enormous opportunities to establish a career in digital marketing. If you are also well-versed in several digital marketing areas then we can assure you that you will land your dream job soon. Each skill of digital marketing is taught by subject area experts and digital enthusiasts who were successful in moulding our students into skilled professionals of the future.

These variations could occur as a result of increased payment transaction volumes during certain times of the day, changes in market circumstances, or policy changes by the government. Furthermore, the infrastructure had to deliver the consistency that Paytm and its merchants needed to manage e-commerce services constantly.

Environmental variables that can harm a company’s growth are known as threats. Paytm’s threats include the following:

This ends our thorough SWOT analysis of Paytm. Let us conclude our learning below.

After an in-depth study of the SWOT analysis of Paytm, we have realised that the company has a strong position in the online fund transferring market. The company’s operations have allowed it to grow in terms of the number of consumers and money it generates.

The business should take advantage of opportunities such as increasing its market in developing countries. We are confident that Paytm will overcome these challenges and continue to be the best company on the planet.

Digital technology is also emerging, thus, the need for digital marketing is elevated throughout the years. If you are interested in grasping a skill or investing in upgrading your skills in marketing, feel free to check out IIDE’s 3 Month Advanced Online Digital Marketing Course to know more.

We hope this blog on the SWOT analysis of Paytm has given you a good insight into the company’s strengths, weaknesses, opportunities and threats.

If you enjoy in-depth company research just like the SWOT analysis of Paytm, check out our IIDE Knowledge portal for more fascinating case studies.

Thank you for taking the time to read this, and do share your thoughts on this case study of the SWOT analysis of Paytm in the comments section below.