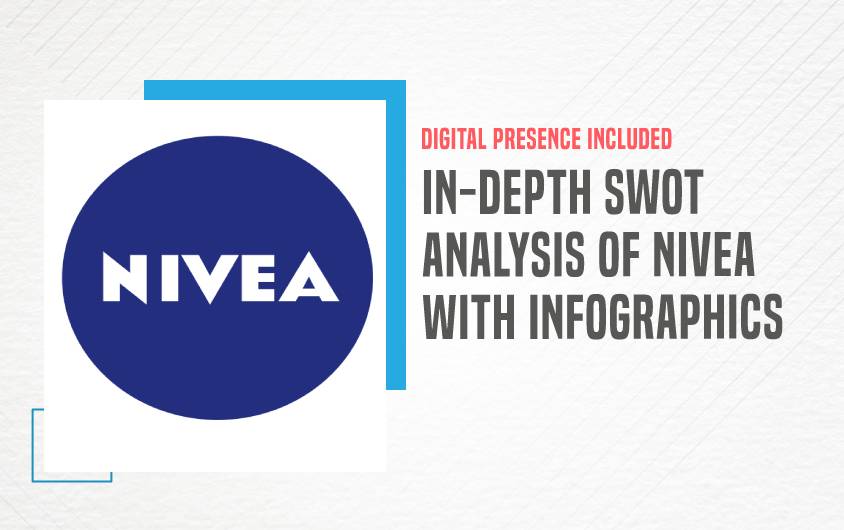 You may have heard about NIVEA or have used either cream, moisturizer, or any other product from this brand at least once as it is one of the most popular and highly reliable skincare brands all over the world. Many young women use Nivea cream daily.

Just as healthy skin requires the proper care to flourish, a strong brand like Nivea requires a marketing plan and serious efforts to reach out to the customers. Its unique formulation, appealing looks, constant research, the addition of new products and rightly switching to digital marketing have made NIVEA a very successful brand today.

To understand the reasons for Nivea’s continuous growth and the popularity the brand has received, we should understand its SWOT analysis, which is required for any business to survive and expand its reach in the market.

Before we go into the SWOT analysis of Nivea, let’s explore more about the brand, by knowing about its initial phase, financial position, products, and close competitors.

Nivea is one of the most popular skincare and personal care companies. It is owned by the German company Beiersdorf. Nivea started its journey for the first time in 1911 by introducing ‘Nivea-Creme’, the world’s first stable oil and water-based cream. The main ingredient of this creme was an innovative emulsifying agent called Eucerit (a Greek word for beautiful wax). Snow white color was obtained from the emulsion and so they named it NIVEA which means snow in real too.

Though its chemical formula remained almost the same over the last 100 years, the tin box went through many different kinds of designs as you can see in the above picture. But one thing to notice is that the impressive dark blue color has become very consistent and contributed a lot to the brand’s unique identity.

After the launching of moisturizer, they gained popularity all over Europe and were able to expand their business by introducing various kinds of sunscreen and many other products for children too. They have constantly reframed the brand to appeal more widely in the global market.

Today, Nivea produces a wide variety of products in different parts of the world. Some of the compelling and innovative products of Nivea are:

And there are several other products available.

Now as we get familiar with the company’s business, let’s begin with the SWOT analysis of Nivea. 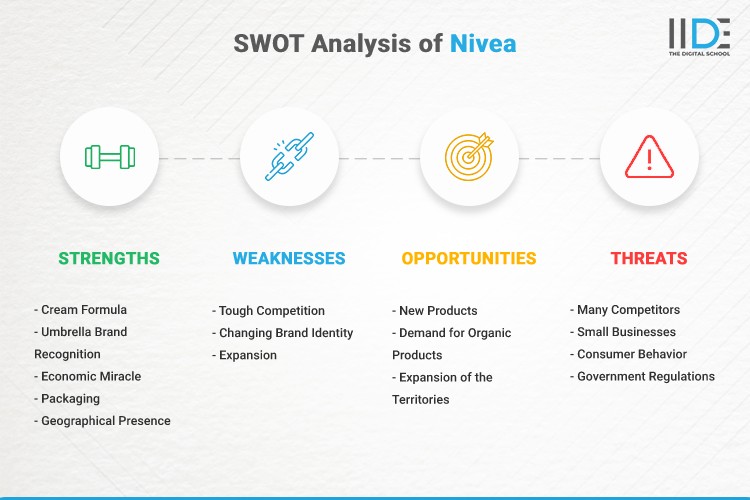 A SWOT Analysis helps us to identify the company’s strengths, weaknesses, possible opportunities, and threats. It’s an excellent tool to understand where a company stands strong, its weak points, what areas it can excel in, and what are its threats.

Strengths indicate what a company excels at and what sets it apart from the competition and how it is unique in the market. Let’s see some of the strengths of Nivea.

Every coin has two sides, now after a bunch of the strengths there come the weaknesses of Nivea.

Opportunities are like a cherry on the top which we cannot ignore as they play a very important role in expanding the business.

Nivea is widely known for its beauty and skin-care products. They have successfully developed an emotional attachment with their consumers by making them happy, satisfied, and constant towards Nivea. In recent years, they have meticulously strategized their expansion in umbrella products so that they can cater to a wide range of customers.

Still, there is great scope of improvement in the men’s segment and the above-mentioned opportunities.

Also, Nivea is continuously trying to attract more customers by introducing more interactive advertisements and consumer engagement activities through digital marketing, as everyone is present on digital media nowadays. Do you also want to learn digital marketing? Check out the 3 Months Advanced Digital Marketing Course by IIDE. As everything is shifting online, this course can be beneficial if you are interested.

If you like through analysis of companies, find some interesting case studies on our IIDE Knowledge Portal.

Thank you for reading this piece of information and if you liked it don’t forget to share your thoughts and feedback down below in the comment section.