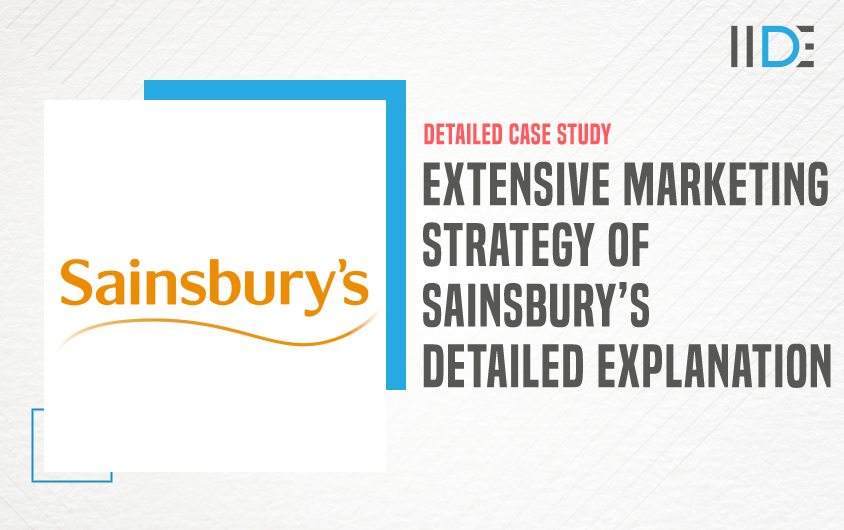 In a previous article, we saw the marketing strategy of Wysa, an Indian-based AI-enabled mental health application. In this article, we’ll discuss Sainsbury’s – a supermarket chain established in the United Kingdom.

The main objective of Sainsbury’s is to be fair with their suppliers and make a trustee environment, and that’s why Sainsbury’s keeps their first priority to provide the best food at a fair price and not focus on short-term gains.

So, today everyone is working digitally and Marketing has become the backbone of all companies in this digital world. So if you want to learn marketing you can check out this Free Masterclass on Digital Marketing by the CEO and founder of IIDE, Karan Shah.

Sainsbury’s plc which people know as Sainsbury’s is the third-largest supermarket chain in the UK. This business was started by John James Sainsbury along with his wife Mary Ann in the year 1869. It started as a fresh food retailer and with time expanded into packaged food items.

They not only tried to make it like before but grew it even more. Today, after going through so many ups and downs, J Sainsbury’s plc is split into three divisions: Sainsbury’s Supermarkets Ltd (including convenience shops), Sainsbury’s Bank, and Argos with over 600 supermarkets and 800 convenience stores.

To sell its products in the consumer market, Sainsbury’s has used both BTL and ATL techniques. To establish its brand, it has run advertisements in newspapers, radio, television, billboards, and flyers. Its promotional strategy includes sales promotion via incentives and database marketing.

Sainsbury’s pricing strategy is built on giving customers “value for money,” which ensures that the quality of products and services is maintained, resulting in customer retention. It uses competitive pricing instead of price lowering because the latter only delivers a short-term gain in market share.

The target audience of Sainsbury’s is from 15 to 80 years. It is a supermarket chain and everyone wants all things to buy from one place and of the best quality so that’s why all people of this age used to go there for their comfort. But the main customer of the company is the family unit, especially Mother. Sainsbury’s does various advertisements on television to attract this segment.

Sainsbury’s is the second-largest grocery chain in the United Kingdom, accounting for a 16.0% shmarket are of the supermarket sector o And positioned itself in medium to high-end markets. Sainsbury’s has carved out a niche as a mid-to-high-end store. As a result, many of the company’s items have a premium price. Sainsbury’s from years ago has come up with different slogans to define what the brand is all about. Slogans like ‘It’s clean, it’s fresh at Sainsbury’s & ‘Sainsbury’s for Quality, Sainsbury’s for Value’ have shown the quality and protocols followed by Sainsbury’s when it comes to food. “Live well with less” – By Sainsbury’s was an awareness campaign more than a marketing campaign to tell the individuals how 10% of every week groceries end up being thrown out in a bin ultimately affecting the environment and our sea species.

To advertise these campaigns Sainsbury’s placed posters in and around Sainsbury’s doors and took the help of social media to promote it. To protect the environment, Sainsbury’s was taking 10% of food out of Sainsbury’s Taste the Different products and giving 10% back to nature by supporting projects of the environmental campaigning community Friends of the Earth.

You can gather complete information about the campaign on this – site. 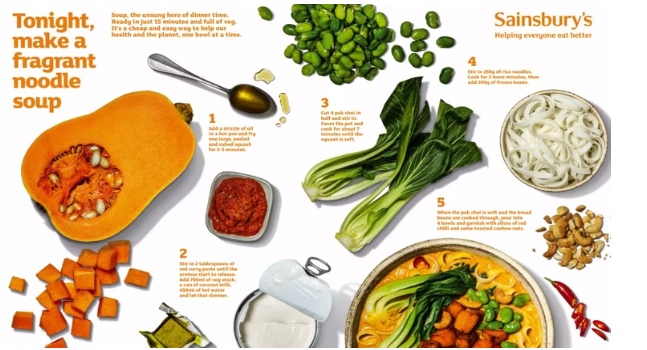 Sainsbury’s ‘Noodle Soup’ has been named the most creatively effective magazine ad of February in terms of public response, thanks to its attention-grabbing colours and brand-building capabilities.

Readers have “complete control” when consuming advertising within a magazine, so to make an impact, the creative must first grab attention, then “hook” the reader in to increase dwell time and maximise “depth of processing. This is a “key strength” of this particular advertisement.

The Sainsbury’s ad is in the top 30% of all UK ads for its capacity to make readers stop and pay attention, thanks to its “bright, vibrant, and fresh-looking” images.

Sainsbury’s has ensured that its social media footprint grows every day. The food recipes and DIY videos spread access to all forms of media and attract a lot of eyeballs. The posts are related to food recipes and tips so that they can help everyone eat better. The company can be found everywhere from Linkedin to Instagram to Facebook to Twitter and Youtube.

Facebook is the strongest Social Media platform for Sainsbury’s when it comes to followers. However, this does not signify a different strategy, but rather just the time spent on a particular platform.

Sainsbury’s has a very well-organised posting routine which makes sure that each Social media platform gets equal attention.

Sainsbury’s posts information content on its social media handles especially on Instagram. If we take the example of Sainsbury’s – “Live well with less” awareness campaign – to prevent even the smallest amounts of food from being wasted, Sainsbury’s shared lots of leftover tips and food recipes on social media at the time when the campaign was conducted. Sainsbury’s invited famous British chefs, like Selin Kiazim, to give online workshops and share recipes. 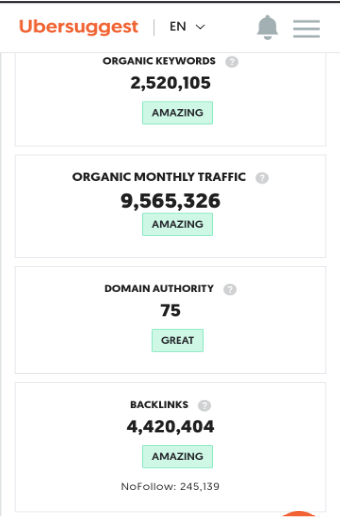 Sainsbury’s has culturally steered away from influencer marketing and celebrity endorsements. There have rarely been any global celebrities featured in their Commercials over the years. However, the company has time and again featured people who have done something for society in different fields.

Sainsbury’s has tied up with two delivery companies, Uber eats and Deliveroo. Sainsbury’s also allows some food bloggers to blog about Sainsbury’s food. And Sainsbury’s doesn’t have many influencers, the company has its own pages and handles to launch its products and many marketing ways to promote its products.

Sainsbury’s has a very good e-commerce platform to sell online groceries. Every type of food is labelled and shown in category wise and there is also a section of top picks which contains the goods which are sold regularly and are very popular.

Users can order Sainsbury’s own-label and branded products plus other grocery and frozen products to their doorsteps from Sainsbury’s e-commerce website. 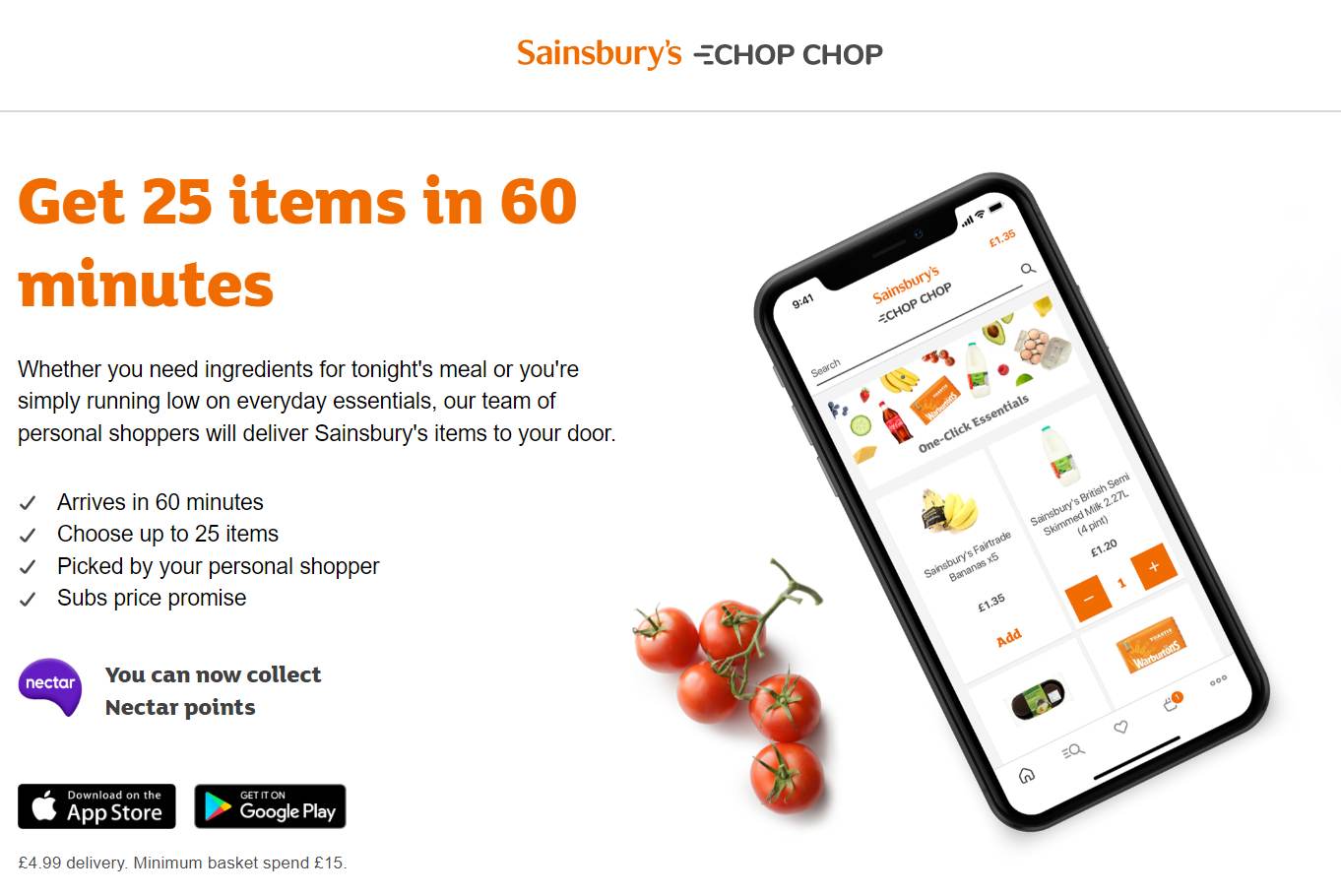 Sainsbury’s has an application named “Chop Chop” – through which you can order groceries and get them delivered in 60 minutes to your door. The application is available on both platforms – Android and iOS.

Sainsbury’s also keeps their content interactive, giving a personal vibe to its client base. Informational content is also a major boost to their imprint as more and more people refer it to each other and help them build a community.

In the Marketing strategy of Sainsbury’s, we had seen that Sainsbury’s believes in providing quality products at fewer prices and this is the thing which makes Sainsbury’s a better supermarket company than others. Sainsbury’s doesn’t want short-term gains they had directly made the long-term gains by gaining the trust of customers.

If you like such in-depth analysis of companies just like the marketing strategy of Sainsbury’s check out our IIDE Knowledge portal for more fascinating case studies.