Analyzing Marketing Strategy DMart: Is It On The Right Track? 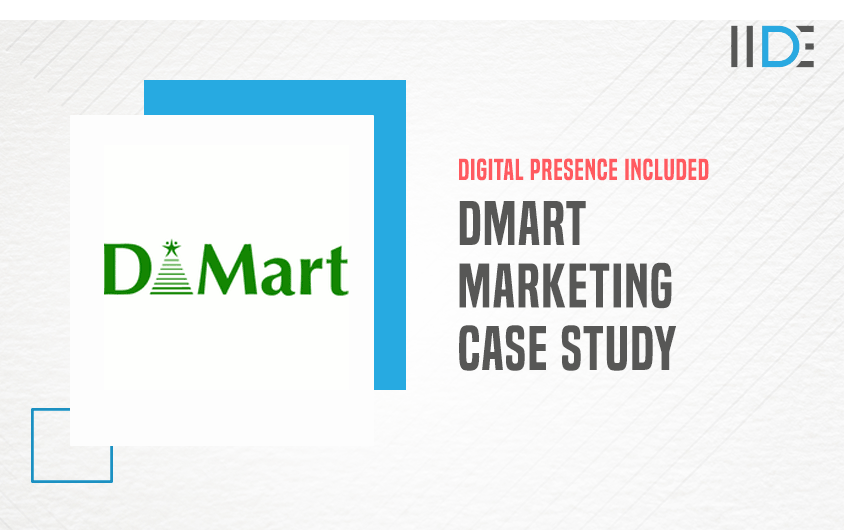 If you are from tier 1 and tier 2 cities of the northwestern or southern part of India, then there’s a high chance that you might have come across this mega supermarket called DMart.  It is one of India’s most successful retail chain companies offering consumer goods and related items all under one roof.

This case study on the marketing strategy of DMart focuses on understanding the company from a marketing point of view by going through its 4ps of the marketing mix, its marketing and advertising strategy as well as its digital presence along with an overview of its competitors in the coming sections.

So let us start by understanding about DMart as a company. 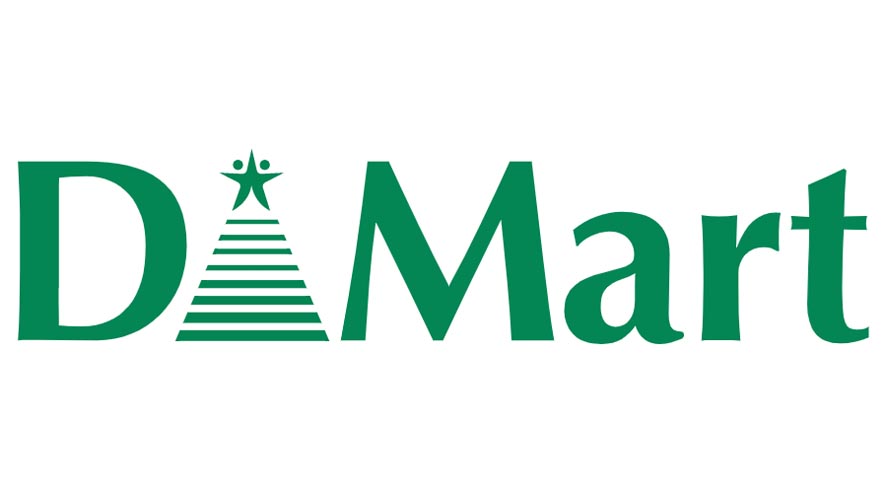 DMart is a chain of supermarkets run and managed by Avenue Supermarts Limited, established in the year 2002. Initially, DMart started as a single store in the year 2000 with the aim of providing the lowest-priced goods to consumers among its competitive peers. 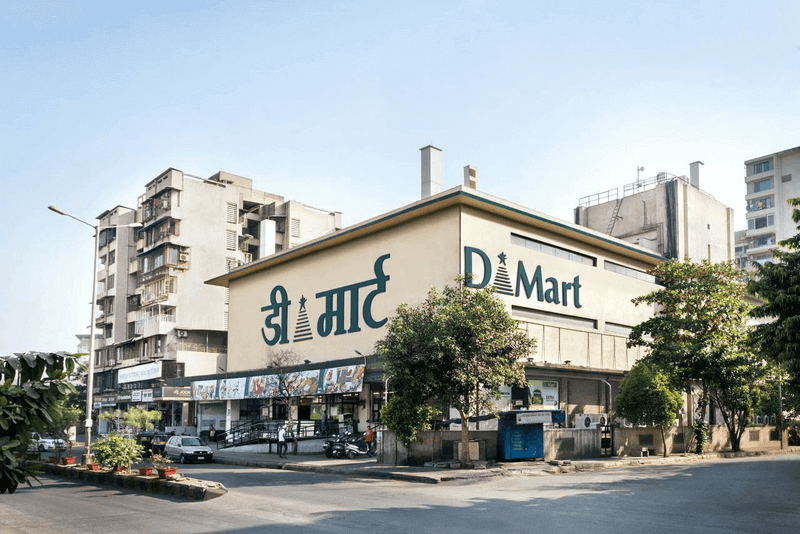 Since then it went onto expanding its footprints, providing its customers with an exceptional shopping experience, confident that they can rely on the quality of its offerings at such discounted prices.

It is owned by Radhakishan Damani who is also one of India’s most respected investors and it is headquartered in Mumbai, Maharashtra.

Today, DMart has become synonymous with the word “Supermarket” and is also regarded as the “Walmart of India” as it offers a wide range of product categories right from groceries to clothes as well as manufacturing and producing some of the products under its brand name. 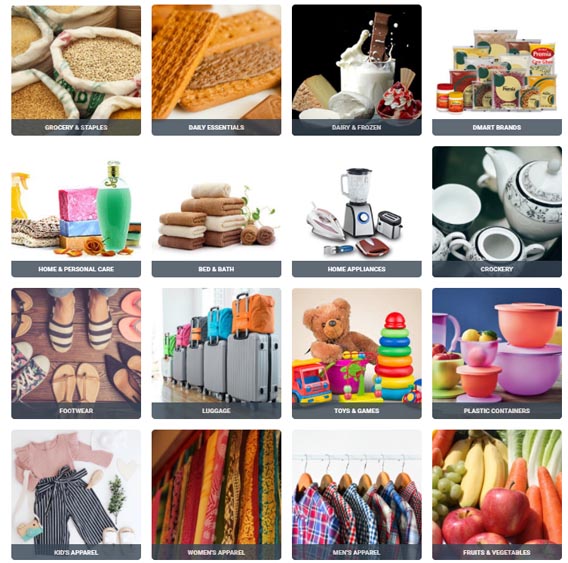 DMart is a listed on the NSE and BSE stock exchanges under the name of ‘Avenue Supermarts’ and is valued at around  1.95 Lakh Crores. It also has five subsidiaries to its name that work towards the smooth functioning of DMart and Avenue Supermarts Limited entity as a whole.

Now that we know about DMart as a company, let us now go through the company’s marketing mix model in detail to get an overall understanding of its offerings.

A marketing mix is a model that a company uses to get its products and services noticed by the right people at the right time. This model is based on pillars of 4Ps: Product, Price, Place and Promotion. It forms the conceptual core of an overall marketing strategy.

So let us go through the marketing mix model of DMart by looking at the parameters of Product, Price, Place and Promotion in the coming section.

DMart also sells a variety of products under its own name through brand names such as D Mart Minimax, D Mart Premia, D Homes, Dutch Harbour.

DMart deeply discounts its merchandise and offers products at less than competitive prices. Thanks to this strategy, it has succeeded in creating an image as a low-cost retailer and has attracted customers who are price sensitive.

The company prides itself on being able to provide affordable prices to its customers regardless of whether they live in urban areas or rural areas.

Its pricing is usually less than the Maximum Retail Price (MRP) except for vegetables, fruits, and medicines. During festival seasons, these low prices make customers buy products in bulk quantities which results in a huge volume of sale.

DMart is the fastest-growing supermarket retail brand in India. As of 2020, DMart has about 214 stores present in about 11 states and 1 union territory and is constantly expanding its stores’ footprints. 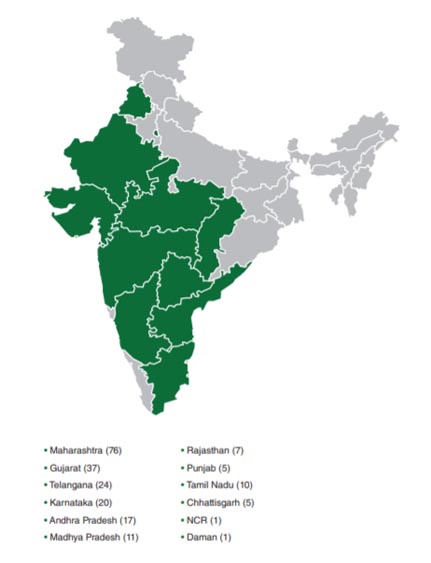 DMart stores are present in a major part of India which includes a presence in cities like Ahmedabad, Hyderabad, Banglore, Chennai, Mumbai etc.

All of its stores are strategically placed as this helps the company to gain a competitive advantage as easy accessibility attracts customers and also leads to proper transportation facility for logistics and operations related functioning which is very important for the survival during uneven times and to accelerated growth of the business during the normal times. 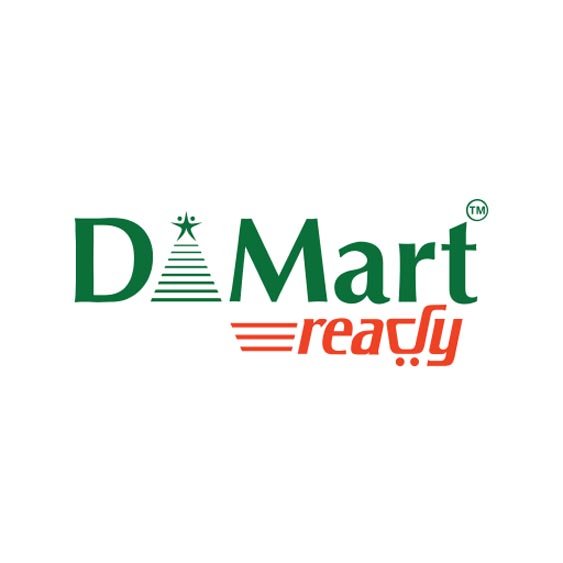 It also offers online ordering & delivery as well as takeaway service under its DMart Ready vertical.

DMart, being the largest multi-brands in India, has been maintaining its positioning as a supermarket offering products at lower prices.

They offer various coupons to reward the customers and employees and thus boost their sales in the market. Coupons are also allotted to the customers when they meet certain standards of bulk purchases.

For instance, during the festive seasons, they offer 15% off on sweets and various other products. It also offers goods at 50% off or at one plus one free offer.

The company however doesn’t engage in aggressive marketing promotion but chooses to promote itself through Newspaper Ads and Outdoor Ads. It also recently collaborated with HDFC Bank and offered additional discounts on payments done with HDFC Cards.

This is how DMart’s lines up on the parameters of the marketing mix model. Let us now go through its marketing strategy in the coming section.

DMart is one such company that doesn’t focus much on marketing itself aggressively unlike most of its competitors. Rather it has always maintained its Unique Selling Position (USP) of offering goods at less than Maximum Retail Price (MRP).

Thus, DMart has managed to get a lot of lower price points than its competitors and this is what makes it stand out when compared to other stores selling the same products.

However, it has involved in aggressive CSR activities and other low-cost promotional activities.

DMart is a company committed to supporting its employees and communities through socially responsible business practices. Through this, DMart aims to make a positive impact on the lives of those who work for it, as well as the people around them

Through this campaign, it has launched an excellence program at various schools in and around Mumbai that helps students in understanding things better and aims at creating an ecosystem that allows students to benefit from better education, mentoring, research facilities as well as networking opportunities.

DMart uses both visuals and print advertisements to promote its name. The visual component consists of hoardings that are displayed in major locations of stores announcing specific product offers.

It also uses newspaper ads that contain information about sales and coupons. These ads utilize pictures of different products along with descriptions that explain why shoppers should buy them. 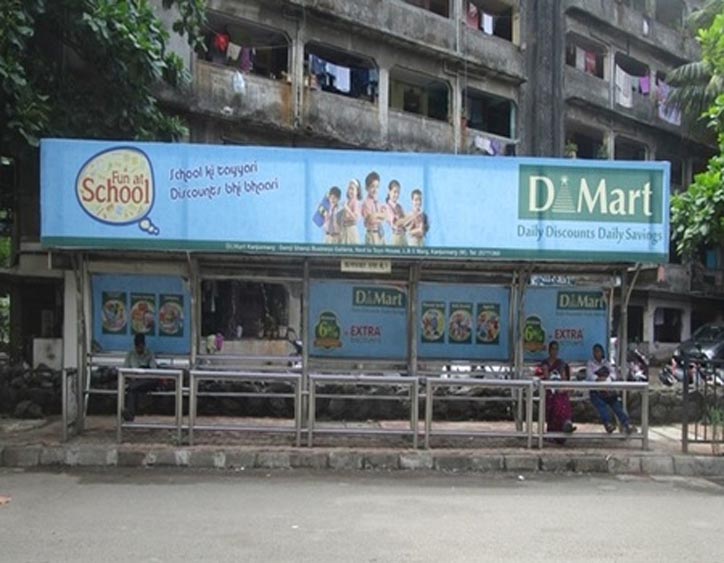 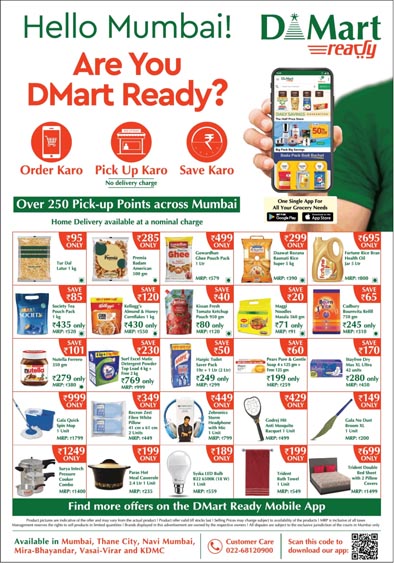 Now that we know that DMart focuses more on CSR activities rather than regular marketing campaigns, let us go through its overall digital presence in the coming section.

Although DMart has one of the strongest offline presence among all major retailers, the retail giant has avoided creating a digital footprint because it doesn’t believe it needs one.

Today, digitalization has become a necessary component for any successful brick and mortar or e-commerce store and Dmart moving forward should embrace the idea of digitalization as part of its overall strategy for growth.

However, the company has taken various steps on the improvements on digital fronts such as by installing chatbot on Facebook Messenger, launching DMart Ready but it has a long way to go. 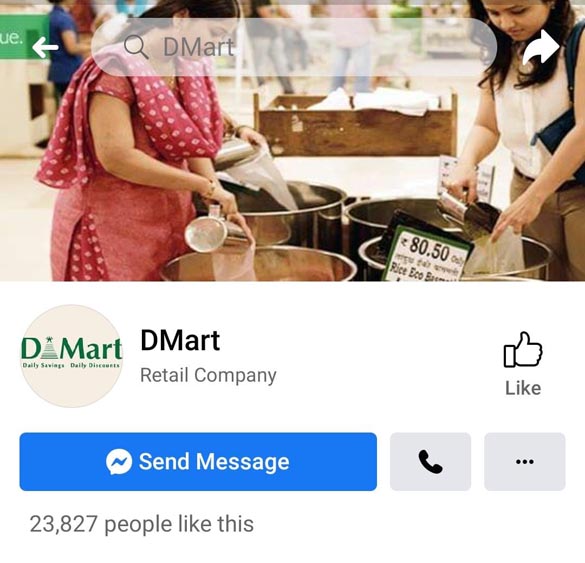 DMart uses Facebook just to inform and clarify doubts of customers which is great but this translates to underutilization of social media. It is not present on Instagram and Twitter which is a major drawback and should work on having a healthy presence on these platforms.

Talking about its competitors like Future Retail (the company that runs Big Bazaar in India) has maintained a very strong digital presence. So, DMart should also be focusing on its digital presence to have an extra advantage.

Now that we have talked about its competitors, let us now run through DMart’s competitors in the coming section.

The Indian retail segment is one of the fastest-growing and least tapped segment. Overall, the retail market is highly unorganized and as we know that India is a developing country and the youngest country, it is observed that the retail segment is something that can become the next big thing.

Companies such as Reliance Industries Limited & Amazon India are going head to head in acquiring the Future Group (The company that runs Big Bazaar, Brand Factory stores in India). 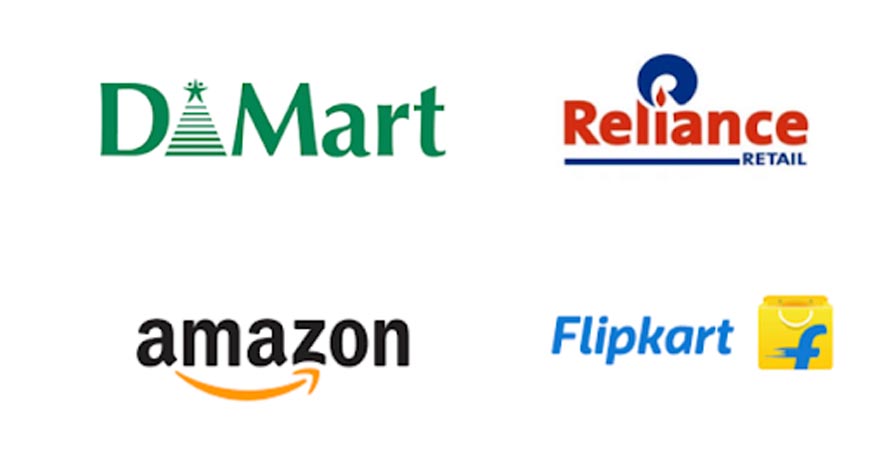 Recently, Tata’s have announced their arrival in the retail segment with the acquisition of Big Basket. Whereas Flipkart, Grofers are all focusing on the penetration of the grocery segment. 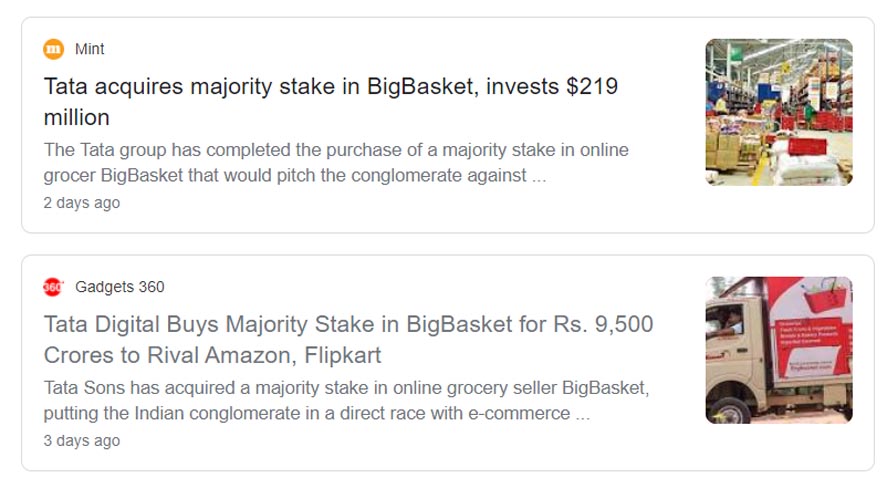 With DMart being one the most well-established company in this segment business-wise, it needs to work on its digital marketing part to give maintain the loyalty of its customers.

With that being said, this case study of DMart comes to an end, let us conclude things in the final section.

DMart strives to give its customers the best quality at a low price by leveraging its financial strength, valuable real estate assets located in various parts of the country as well as its extensive network of distribution facilities. This has helped it become one of the most successful retail companies in India.

However, in this rapidly digitizing world, with Covid-19 is here to stay for a while and the entry of different giants such as Reliance Retail, Amazon India, The Tata’s and Walmart owned Flipkart, things are certainly going change in the coming decades and DMart should work on having it’s all sides covered.